Reverence for the Altar?

At a Mass a priest invited parishioners into the sanctuary to sign them up for a fundraising campaign. He did this directly on the corporal on the altar itself, with people milling around and talking in front of the tabernacle and with their backs to it. Is this conduct acceptable? 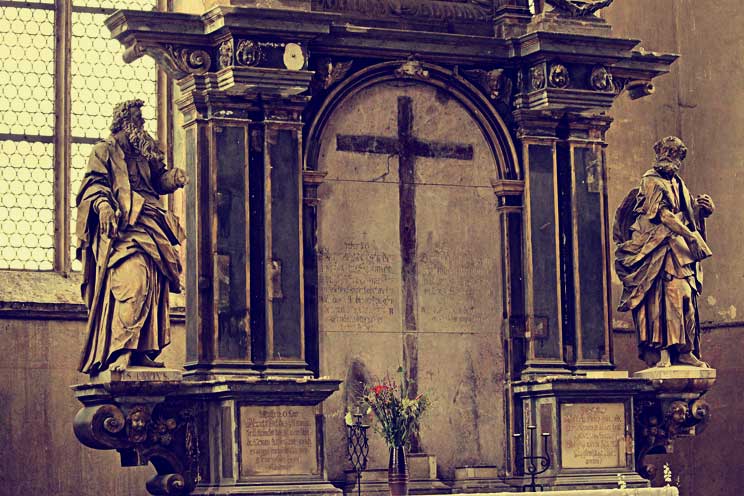 Because you mention that the priest used the corporal as a surface on which to place papers for parishioners’ signatures, I presume that this occurred during the course of the liturgy after the corporal had been opened out in readiness for the Offertory of the Mass.

If that is so, then the priest’s action is certainly odd. Using the corporal as a surface for the signing of the papers would surely make it the least likely spot for signatures. The corporal is a linen cloth on which the Eucharist rests during the sacred rites. Being linen, one would think its texture too unstable for writing on.
Did the priest have some significant reason for using the corporal on the altar as a sort of office desk? I cannot guess what his reason would be, but his action could be perceived as unworthy of the sacredness of the sanctuary and its purpose during the Church’s supreme liturgical act of worship.

The sanctuary is the area in the church which is reserved for the ordained clergy to celebrate the sacred liturgy. It may not be used for any other purpose. The priest ought to have located the fundraising gathering to the sacristy or any other suitable place.

We must make the distinction between the Church’s formal acts of liturgical worship and the informal moments when people are in the sanctuary and the body of the church.

During the formal process of a marriage ceremony, for example, the celebration follows the prescribed rubrics and the conventional local customs that the bride and groom are are comfortable with. There are also informal moments when those present in the sanctuary or in the pews pass humorous remarks as the nervous couple dither over the words that solemnise their vows to take each other in a life-long covenant. Being human, priests and people easily slip from our formal long faces into our broad and informal grins, even at very sacred moments.

In the case that you mention, it strikes me that, odd as it was, this was not a case of the priest neglecting to show the reverence due to the holy actions he was performing.

He was gathering generous people who have faith in Christ around the altar to ask them to support a worthy cause at a moment he knew they would be at Mass. They milled around and chatted, something our Lord would understand, but strict liturgists would probably not.

Send your queries to Open Door  e-mail: opendoor@scross.co.za;  Anonymity can be preserved by arrangement, but questions must be signed, and may be edited for clarity. Only published questions will be answered.