Face-to-face with Christian Victims of ISIS

When ELISE HARRIS visited refugee camps in Iraq, things were not quite as she thought they would be. 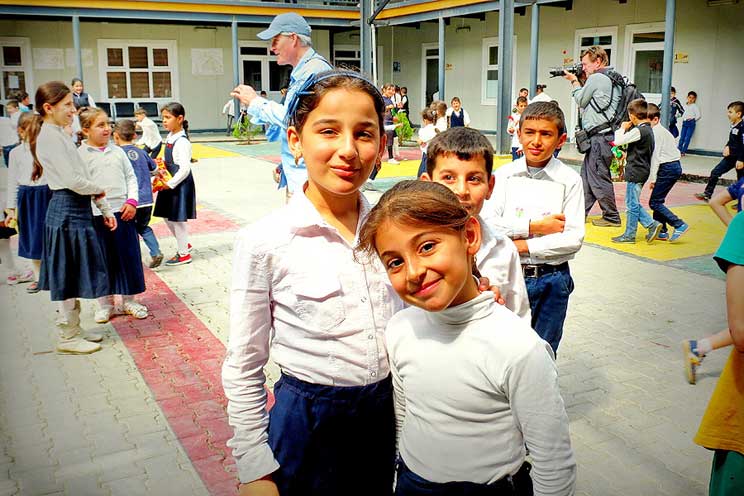 Students at the prefab school of the Dominican Sisters of St Catherine of Siena in Ankawa, Erbil. The Christian refugees are hopeful that ISIS will be defeated soon and that they will return home. (Photos: Elise Harris/CNA).

With a cockeyed arm he points to three smaller scars that decorate the left side of his misshaped abdomen, marking the times he was shot when ISIS opened fire on his car last year.

I stand in the dust surrounded by rows of boxy prefab trailers listening to his story. I focus on the scar marking where the bullet that landed just centimetres below his heart entered his thick body.

My translator recounts the terrifying story of how Mr Toubia’s car burst into flames in the middle of the road he had been driving between Qaraqosh and the village of Shikhan when ISIS opened fire. He was pulled to safety by passers-by just in time. Now, having barely survived the ordeal, he says that “it was grace that saved me”.

With a body marred by gruesome scars, he carries on.

Mr Toubia had been a taxi driver in Qaraqosh—the former Christian capital of Iraq now in the clutches of ISIS after the militants stormed the city, lighting up the night sky with bombs and gunfire on August 6, 2014.

Like the 120000 others who fled with him, Mr Toubia heard late that night that ISIS was coming and crammed his family and a few belongings into his taxi and sped toward Erbil in stop-and-go traffic alongside the thousands of others who were headed to the same destination.

Since then Mr Toubia has been among the 5500 Christians, including more than 2000 children, living in the city’s Aishty 2 camp for the displaced.

He had attempted to continue working, driving people from one city to another for income, until his car was shot up by ISIS. Now, after losing his home, his livelihood, and with a body marred by gruesome scars, he tries to carry on, and says that he is “happy to be alive”.

This is Erbil, Iraq—home to nearly 70000 internally displaced people, most of them Christians.

Mr Toubia’s is just one among the many similar stories I came across when I spent six days in Iraq as part of a media delegation accompanying Cardinal Timothy Dolan of New York on a pastoral visit to Erbil and Dohuk. The two cities are where the majority of those who fled their homes are now living in camps after ISIS swept across the Plains of Nineveh in the summer of 2014.

We as a delegation spent our time visiting various schools, projects and camps set up for the hundreds of thousands of refugees—internally displaced persons (IDPs)—who left their homes, and in many cases their livelihoods, behind in one night. Most of them are Christians and Yazidis from Mosul and Qaraqosh.

There were moments when what I saw and heard took my breath. I smiled. I choked back tears. I found myself fidgety, nervous.

A city frozen in time

Erbil itself is a city frozen in time. Only a few years ago it was on the fast track to becoming the next Qatar or Dubai of the Middle East: construction was booming and everywhere new buildings and condominiums were popping up in what was a promising upward economic tilt.

However, after the rise of ISIS and the sharp fall of oil prices, the construction came to a screeching halt and building projects, highway remodels and construction renovations were simply abandoned. Incomplete edifices, one of which was to be a large new shopping mall, are scattered throughout the city. As investors, homeowners and contractors suddenly found their pockets empty and their hands tied up in litigation, families fleeing from ISIS poured into the unfinished buildings and took refuge. Some have been living there ever since, while the majority have gone to one of the many camps that have been formed throughout Erbil.

The stench of sewage wafts into rooms and coats the air.

Once the grim reality set in that it would be more than just a few days or weeks before the people could go home, the Church acted swiftly and vigorously in setting up the camps. Most of them are overcrowded, with families packed into prefabricated trailers between 1-3 rooms each, at times housing eight people or more. The largest Christian camp in Erbil, called the Aishty camp, is located in the Christian suburb of Ain Qawa, and is divided into three smaller camps.

Fardos, who lives in a squashed, two-room trailer in one of them, Aishty 1, with five other members of her family, including her mother and children, worries that the snakes and insects that creep into the trailer will get to her infant daughter.

As I squeezed in with the family around their humble kitchen table, Fardos told me they all escaped from Qaraqosh on the day ISIS attacked. When they got to Erbil, they initially took refuge inside a church hall, where they slept on the floor along with 14 other families, numbering more than 100 people in total. There was barely enough room to walk between the people, and at night they couldn’t get up without disturbing the others. After moving into the camp, problems abounded.

Bathrooms were few and hard to get to, there was little space inside their flimsy trailer, they had no water and “the room stunk a lot”.

Picture of ‘The Martyr’

On our second day in Iraq our delegation took the long, bumpy road to Dohuk, which sits near the Iraqi border with Turkey, and near Mosul. The city is where the majority of the Yazidis fled and is the closest we came to ISIS territory.

As we walked into the Dawodiya camp—which is about 60-70% Yazidi, followed by Christians and a few Muslims—the smell wasn’t obvious at first. The stench of sewage sets in after a few minutes. It comes in waves with a gust of the breeze that carries the scent of the murky water flowing in thin canals carved into the dirt pathways that snake through the camp for drainage.

Suffering abounded in each of the “homes” we entered. My heart ached as I walked into the trailer of a grieving mother whose son, just one month after being married, joined the Kurdish army forces, known as the Peshmerga. He was killed after only a few weeks of fighting ISIS on the frontlines, and is referred to as one of “the martyrs”. His picture now hangs on the wall of his mother’s trailer with a rosary draped over it.

Another story that made my stomach churn was that of Hazar Namir, a 32-year-old Yazidi woman born in Sinjar. Her husband and their three sons were all abducted by ISIS when the militants stormed the city on August 3, 2014. While Hazar and her younger sons managed to escape in November 2015, after more than a year in captivity, her husband remains in the hands of ISIS.

What had they done to her? Did she know where her husband was? Did she have nightmares?

As the rest of our delegation piled out of her tiny home, I lingered for a few moments and asked to take her picture. Once the men had left—I was one of only two women in the delegation—she lowered the black fabric covering the lower half of her face and flashed me a confident, yet reserved, almost bashful smile. 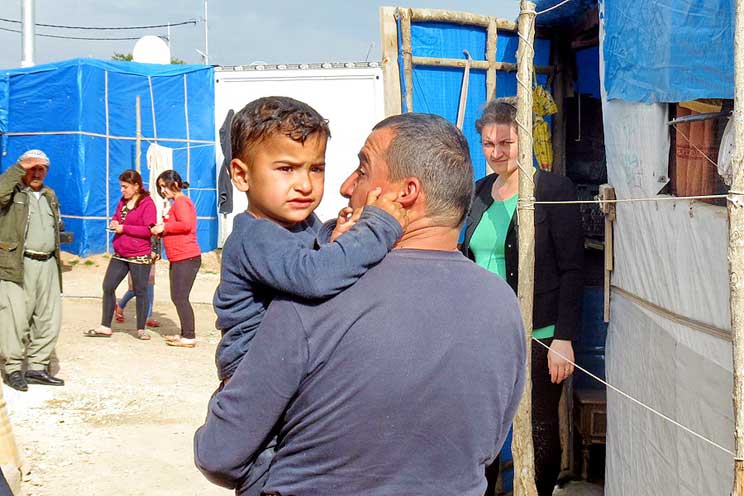 Internally displaced Christians at a refugee centre in Dawodiya, Iraq.

As I smiled back and captured her flawless beauty in digital form, I couldn’t help but wonder why she felt so open with me—did she trust me? Why? How could her eyes still sparkle so brightly and familiarly when her family had experienced such terror and undergone so much suffering? What had they done to her? Did she know where her husband was? Did she have nightmares about what was happening to him, or what had happened to her and her sons? Does she feel safe?

These are the questions that raced through my mind over and over as I met with different families and spoke with different people, most of whom are desperate and confused.

What most of the displaced want is to go back home. But with the situation showing precious little improvement, many have become fed up, and are thinking of going abroad. While hopes of returning might have been higher after the initial displacement in 2014, they have significantly diminished now that the situation has dragged on for almost two years. The future is no clearer than it was two years ago—if anything, it’s foggier, especially for Christians.

“If we were not believers, half of us would be suicidal,” said Ibrahim Shaba Lalo, the director of Ain Qawa’s Aishty 2 camp, when I asked about the mental state of the people living in the camps.

For many hope is small and there seems to be no light at the end of the tunnel, he said, explaining that many are thinking about leaving, fuelling growing concerns that within a few years Iraq will be empty of Christians if their land is not liberated.

However, despite the growing sense of desperation among the people, I also found a surprising resilience and determination on the part of many to stay; to return to their land and their homes.

ISIS is ‘the world’s game’

A parish priest in Alqosh, the only remaining Christian village on the Plain of Nineveh not captured by ISIS, told me as he sipped from a typical Iraqi glass teacup that in the time that has passed, “we have understood now that ISIS is a game”.

“It is the world’s game” in which it has become clear that certain nations want ISIS to stay, either for the economic benefit of selling them weapons, or to keep the war out of their own territory. Even if entire nations are crumbling in the process, it’s not a concern for those whose pockets are being lined, he said. Most locals I spoke with share the same anger and frustration, and pin the majority of the fault for funding ISIS on neighbouring Middle Eastern nations such as Turkey, Saudi Arabia and Qatar.

Despite their open sense of welcome and generosity towards me, most Iraqis do blame the United States for the rise of ISIS and for the chaos that has ensued since the end of the war started by the US and other Western states in 2003.

There is a hopeful buzz in the community that within a year Mosul and Qaraqosh will be liberated and made livable soon after—yet a sceptical shadow of doubt still shrouds the hopes of many, who are frustrated that more action has not been taken at this point.

Ecclesiastical leaders such as Archbishop Bashar Warda, Chaldean archbishop of Erbil, praised the recent decision of the US government to declare ISIS persecution of Christians, Yazidis and Shia Muslims a genocide, saying it “does justice to the victims”.

While this is a step in the right direction, for many of the displaced such declarations by governments are too little, too late. They are thankful the world has finally decided to call a spade a spade—but for many one question hangs densely in the air: now what?—CNA