Fr Chris Townsend: ‘I am trying to be a better preacher’

In response to Sr Sue Rakoczy’s cri de coeur about preaching in The Southern Cross in April, and the variety of reaction thereafter, I was given a chance to reflect on preaching, and specifically my own preaching.

I’m not sure I come out very well. In fact, as much as I passionately love scripture and love sharing that passion, I think that listening to me could easily be quite boring.

Perhaps I do rehash the Gospel too often. Sometimes the homily that I do prepare and think about comes out totally different from what I had planned.

Sometimes I feel sorry for the first Mass that gets the homily for the weekend—they really end up being like newly married husbands having to endure their new wife’s cooking experiments. Every weekend. I wish sometimes that they would come to hear the same effort at the last Mass of the weekend. I think it’s better.

I’m also not a morning person. So, Sunday mornings before coffee are seriously intimidating. I look at you and you look at me and I get shivers down my spine. Coffee helps.

For me, preparing for a Sunday begins on Monday. I consider it a privilege that I am forced to start on Monday so that I can keep up with my commitments.

I co-host a radio programme for catechists and parents on Radio Veritas every week. My part of that show is devoted to looking at the Scripture of the coming Sunday. Together with Sr Patricia Finn, we look at forming catechists. I have learned so much from our on-air interaction that I dare not miss my rather rudimentary preparation. 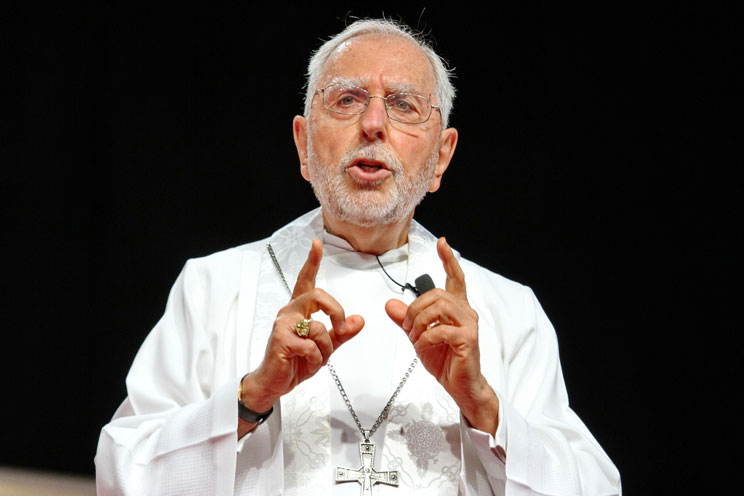 A priest makes a point during a homily. In his column, Fr Chris Townsend explains how he tries to improve his preaching. (CNS photo/Michael Alexander, Georgia Bulletin)

I have another fantastic privilege, or grace. Twice a week in the parish I present a Bible study to two very different groups. This interaction has coloured my attempts at preaching by often exposing things I have not thought about at all. Things that, once seen, you cannot but incorporate into your efforts.

So where do we go from here with preaching? I think, firstly, that we need good preaching examples.

Much of the Pentecostal style that Sr Sue bemoans is the style that is pervasive on TV and in township experience. The more you shout the better you’re heard—and strangely, the better the collection…

I thank God for the excellent examples we had in the seminary of great preachers. I personally hold Fr Nick King SJ as one of the best preachers I have ever heard. His gift? Brevity.

The other great gift for preachers is a profound appreciation of the Church’s understanding that we don’t have to explain everything in one homily.

The unfolding of the history of salvation didn’t happen in an instant—so our preaching should respect that our hearers have their own history of salvation. As many as there are participants at Mass are the stories. And the ears. But all one generally gets at an all-you-can-eat buffet is indigestion.

During our internships, we had to have a few members of the communities we worked in to assess our preaching. I think this is an important feedback that we lack when we are grown up as priests.

It takes a profound humility to allow honest feedback on a homily. I don’t mean the type that goes, “Great homily, Father”. We need to find the space and place to allow the “Father, you missed the point” kind of critique. Some people are brave enough to be honest without attacking, and these are the voices that one needs to hear.

I don’t open my e-mail on a Monday or answer my phone until I have had a decent cup of coffee. Sadly, the Monday morning angry callers and vitriolic e-mailers are generally totally counter-productive to the improvement of anything. I’m generally more inclined to listen to the voices that reflect a little before communicating — and I try to honour that by listening first before reacting.

Where does that leave me? In the last few weeks I have tried to be a little more focused.

And I have also remembered something my mother always said: “Give me something to chew on, to mull over for my discipleship over the week.”

After a few years of using the new edition of the Roman Missal in English and the Revised Standard Version...