Angels seem to be quite popular, though more in esoteric circles than Catholic circles these days, like the end times, and what is sometimes known as the Rapture. 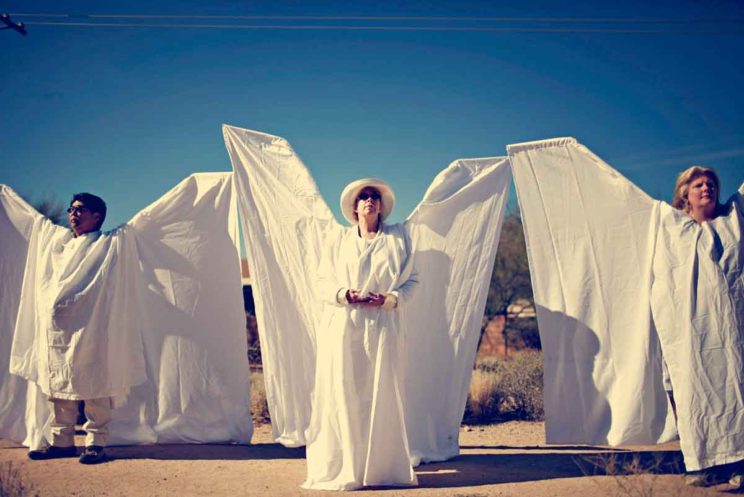 There is much in apocalyptic literature about angels. In fact, St Michael is featured there as the powerful defender who finally defeats Satan, showing God’s ultimate greater power.

It is good to have some idea of these scriptural images, and scripture scholar Margaret Mollett in the latest Family Matters magazine writes on the Rapture and premillennialism theories — something about which Catholics are mostly quite ill-informed.

Gabriel as the messenger and Raphael as the healer are popular, but devotion to St Michael in the Catholic world tends to eclipse the other two archangels. Many parishes, for example, say the Prayer to St Michael at the end of Mass to “defend us in the day of battle and be our safeguard against the wickedness and snares of the devil”.  Maybe some families do too, conscious of and fearing evil influences.

Some of us do at times feel attacked by evil, or sense themselves to be in the midst of a war — but how often do we genuinely associate that with the devil’s workings?

Satan and satanism are also real, but they are understood somewhat differently these days. As a cult it sometimes flares up through the media when a crime has been committed that appears to have strange elements.

There are experts on this subject and the Church appoints exorcists dedicated to the work of deliverance and casting out of demons as there is no doubt that evil exists in the world and even in the Church too — something Fr Gabriele Amorth, Rome’s former chief exorcist who died this month, often emphasised.

It has been claimed that the devil’s first priority is attacking and destroying family life.

Pope Francis himself does preach about the devil. Early in his pontificate, in 2013, he blessed a sculpture of St Michael in the Vatican gardens and then placed Vatican City under St Michael’s protection.

During a 2015 visit to a Harlem school in New York he told children that the devil is a killjoy who tries to spoil their dreams and destroy their happiness.

“Where there are dreams and where there is joy, Jesus is always present,” Pope Francis said. But “the devil sows sadness, distrust, envy and evil desires”.

He also said that a shield of faith is needed because the devil doesn’t throw flowers at us but flaming arrows to kill us. He does not kill the body but infects our spirits.

But our focus should be on the angels, also God’s creatures. Michael tends to take the front seat, but his fellow archangels and other angels have their place too.

Gabriel, the messenger, is associated in the New Testament with the whole infancy narrative of the Annunciation and birth of Jesus, as well as giving messages to Joseph in his dreams.

Raphael, who is patron of travellers and also of the medical profession, could have his work cut out more fully to assist us in preserving life and many other medical and bioethical issues.

In his apostolic exhortation Amoris Laetitia (The Joy of Love), the Holy Father acknowledges the value of different forms of traditional piety in families. These are often cultural, with different countries or groups having different devotions and traditions.

It is sad that devotion to our Guardian Angels seems to have dissipated. In his homily in 2015 on the feast of the Guardian Angels the pope reminded those present that our Guardian Angels are always present with us. They are ambassadors from God and our response is to respect and listen as they “guard and guide” us, as we used to pray.

One of my favourite childhood memories is singing one particular beautiful song about the angels’ watch. The words go more or less like this:  When children go to sleep at night their angels watch over them.  In the morning, when children awake, the angels can rest because God, the loving and merciful Father, himself keeps watch.

Angels, like saints, take nothing away from God but are God’s agents. Sometimes it is maybe little more than a nice tradition to honour them.

However, as family people we might well take Archangel Michael’s role especially to heart: to recognise the forms of evil around us, and with growing faith and conviction pray for his protection from evil.

This can challenge us to examine our own actions too. The Church, the world and our families certainly need it.

Family: What More Can be Done?