Interview with the Editor: We are a forum for all Catholics 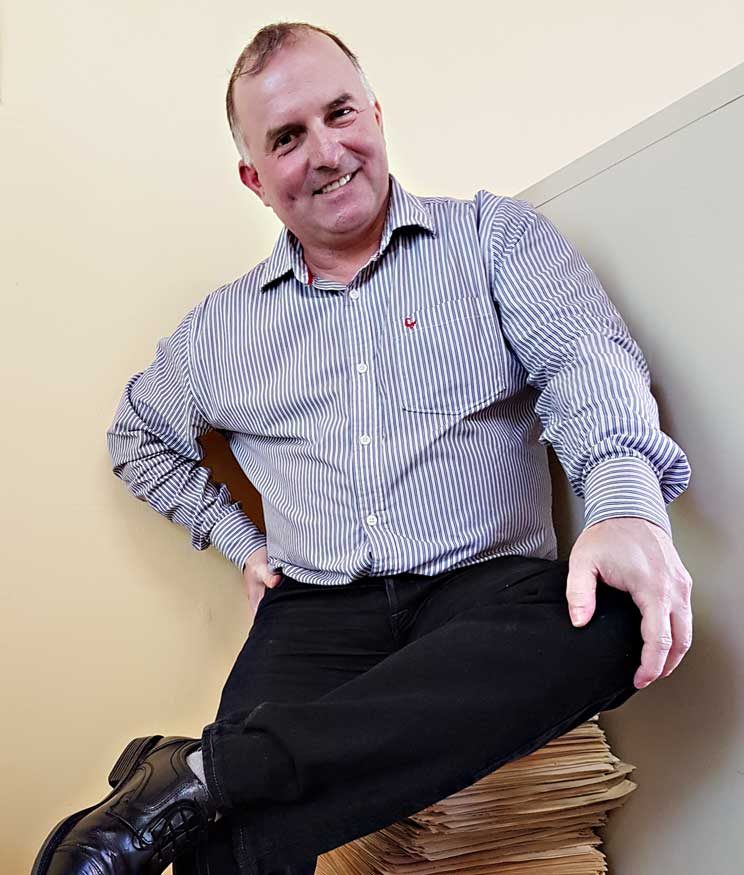 Günther Simmermacher, editor of The Southern Cross, sits on a pile of every edition of he has worked since joining the staff of thew newspaper in January 1995. (Photo: Mandla Zibi)

You have been with The Southern Cross for almost 22 years, 15 of these as editor. The world of media has revolutionised in those 22 years. The Southern Cross seems to have, so far, “weathered the storm”. What do you attribute this to?

Indeed, the newspaper industry has changed immensely in those two decades; consumer behaviour has changed — in large part because of the stupid decision by most newspapers to give away all their content for free [on the Internet] — and that has resulted in declining circulations worldwide. Many long-established newspapers have folded.

We aren’t immune to that, but we have a very loyal core readership that really loves its Catholic weekly. And I hope that the quality of The Southern Cross has fostered that loyalty.

Some publications have panicked and tried to totally reinvent themselves. That sort of thing almost never works. We have confidence in our content, and we try to improve it all the time. But we won’t do anything silly to try and be “with it”.

Has your readership changed in that time?

Well, our readership is much more diverse than it was in January 1995, when I first came to The Southern Cross. I don’t think the old cliché of the readership being “old white people” is true anymore, if it ever was. We can see that on our Community Pics page, and in our news pages, and I can see that concretely in the demographics of the people who take part in our pilgrimages.

Also age-wise, on Facebook I notice that we have a significant number of younger readers. Though “younger readers” in our case means more 30-upwards than teenagers!

That’s interesting. Younger readers are interacting with The Southern Cross on Facebook.  At most meetings in dioceses and parishes people always raise concern about “the youth” — or the lack of participation of young people. Any ideas, from your experience and knowledge of media, as to how the Church can better reach out to the 30-downwards group?

That’s the million-dollar question, isn’t it? I think, first of all, we mustn’t get stuck on the idea that all youth should be active. Just like most adults, they won’t be. But we must engage the young people who are active. That means giving them a role in the “management” of parish life.

As far as media goes, we must give youth the freedom to express themselves without fear of being pulled up on points of doctrine. What young person, or anybody, wants to hear: “You are wrong”?

So what is needed is a space, on social media and in catechism, for young people to be engaged in respectful dialogue, where ideas can be exchanged without any arguments having to be won.

Do you think that The Southern Cross has exploited new media well enough?

Within our limited resources we’re trying. We were one of the first newspapers in South Africa to offer digital subscriptions, and have more digital subscribers than some well-known secular newspapers.

But in the digital world, much of what media organisations are doing is guesswork. The Internet has created huge problems for the publishing industry, and nobody really knows what the right answers for a sustainable future are; where the revenue streams will come from when circulations drop below sustainable levels.

But there are also opportunities. At The Southern Cross we are looking at broadening “the brand”, so our title will mean more to people than it being just a newspaper. We are busy strategising the whats and hows of that, but we are determined to keep The Southern Cross going.

We are fortunate to have an excellent digital editor in Claire Allen, an authority in the field on the board of directors in the form of Jude Mathurine, and in Claire Mathieson a really switched-on person on the Editorial Advisory Board. So I’m confident that we’ll walk on the right digital paths — but, of course, constrained within the limitations of resources available to us.

You speak of limited resources. How many people work full-time to produce this Catholic weekly?

We have a tiny full-time staff: Four in editorial — plus Michael Shackleton, who comes in twice a week to proof the issues before they go to print — and five in administration. Because of retirements, we have been able to reduce our staff complement by one.

What changes in Catholic life have you seen in South Africa over the last two decades?

I see three major areas. Firstly, the Church has become more integrated. There’s still a long way to go, of course, but we’re on the way. The African diaspora in South Africa is also having an impact on the local Church. Some formerly “white parishes” are now mostly black, with Masses offered for different language groups. We are the universal Church — now we have to act like one.

Secondly, the racial composition of the bishops has changed quite dramatically. Twenty years ago there were [makes a quick count] seven active black African bishops in the SACBC region, four of them in South Africa itself. Now there are 13, and I have no doubt that the number will increase. That has an influence on the way the Church thinks and acts throughout the region.

Finally, funding agencies are giving less to the Southern African Church now than they used to, so we are moving from being a dependent Church to one that has to be self-sufficient. We haven’t arrived at that stage yet — we still need funding from overseas, and becoming a self-sufficient Church will need much more work still — but that is a very significant change.

With these changes in mind, how has the mission of The Southern Cross changed over the years?

When I first came to the newspaper, there was an attitude that black Catholics generally have no interest in an English-language Catholic newspaper, and the content sort of reflected that. Over the years we have tried to become more universal, trying to reflect the local Church more accurately.

Having said that, the core issues for us Catholics are universal: our faith in the Lord, our devotion to Our Lady and the saints, our fidelity to the Holy Father, our need to pray, our call to mission and all that transcends race and culture and class. Of course, there are differences in the details of how we live the faith and celebrate the liturgy, but there is so much that we have in common.

The Southern Cross’ mission is to speak to these core elements of our faith, and to offer a reflection of how that faith is lived in all the communities. I admit that sometimes we might not succeed entirely in doing so — that’s for our readers to decide — but that philosophy is our guiding principle.

What is the target audience of The Southern Cross? Do you know the demographics?

We don’t have the resources for market research, so we don’t have demographic statistics. And we certainly don’t have a specifically defined target demographic. We believe it is necessary that every Catholic family with the facility to read English ought to have a Southern Cross in their homes. So our target audience is all those Catholics.

“Catholic” by its nature is universal and therefore also means, it seems to me, that there will be differing views and opinions on matters Catholic. The Church has always held diversity in its unity. How do you navigate opposing views, conflicting views?

You know, The Southern Cross is the only national Catholic weekly, and that is an advantage in many ways, because we are a meeting point for Catholics who’d otherwise avoid other Catholics who hold conflicting viewpoints.

In countries like Britain or the US you have different Catholic publications for people holding progressive, moderate, conservative or ultra-conservative views. That breeds a factional Church and ghettos of ideology.

Now, we do have factions here in South Africa too, obviously. But at least these factions have a forum where they can “meet”. So The Southern Cross fulfils the function of being a home to people of diverging viewpoints.

And the fact that these conflicting viewpoints — from very conservative to very progressive — are expressed in the newspaper shows that we are providing a forum for all Catholics.

On the letters page. That must be quite difficult to manage — at times letters seem to be vitriolic and aggressive. Sometimes I am disappointed at the level of conversation, or the absence thereof, Catholics choose to have on that page. How do you decide on which letters to publish or not? Linked to that, it seems that the same old people write letters.

But letters pages are always like that. Even under Cardinal [Owen] McCann’s editorship in the late 1980s, the same people were writing in, from sharply contrasting perspectives, and there was lots of aggro. It hasn’t really changed.

We try to publish most letters we receive. I don’t think it’s my job to decide whose views may be heard and whose not.

Those that get rejected might have to do with parish or diocesan conflicts which we can’t really get involved in, or they repeat points already made by others, or are too difficult to understand, or are too long. Or if they are too nasty — and if you think what we publish is sometimes too vitriolic, you should see some of the stuff we don’t run!

My disappointment is that the letters page is not an accurate demographic representation of our readership, the way the pictures page tends to be. I really wish that would change.

The Southern Cross: A Question of Survival