Our Mission Today: the Business of Every Catholic

The haunting image on our front-page this week of a Jesuit priest facing an armoured police vehicle, moments before he was shot in the face, will doubtless become embedded in our collective memory for many reasons. 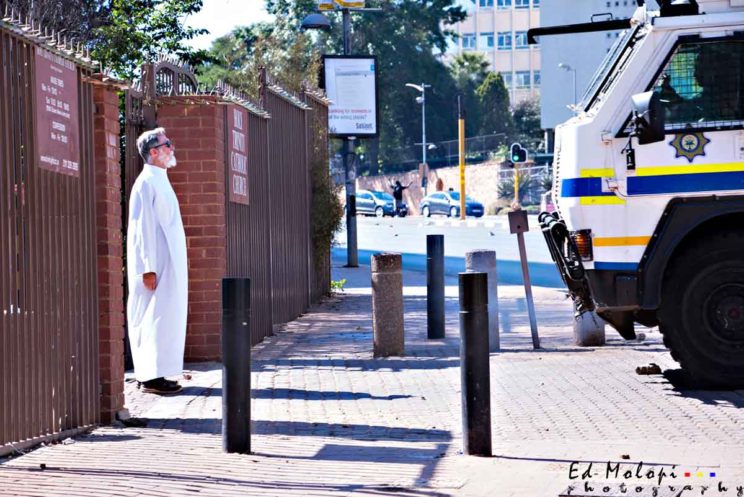 For one thing, Edward Molopi’s photo is a snapshot in time of the 2016 student protests as a throwback to the brutal days of 30 years ago, when the state also sought to assert its power through the deployment of its feared Casspirs.

Fr Graham Pugin’s straight posture as he protects the oasis of safe refuge of Braamfontein’s Holy Trinity church speaks of a brave rejection of violence in favour of a radical option for peace.

But for Catholics this image has a deeper meaning, more profound than a stand-off between a courageous man and a menacing power. This photo embodies for us the presence of Christ in the midst of bullets and flames, chaos and fear.

The story of the rubber bullets that injured the passive priest is important, of course. It rightly scandalised the Catholic community, and many others. But it was a fleeting news item for a day or two.

Our front-page lead this week takes the broader view, and tells the more important story: how Holy Trinity in Braamfontein is a mission station in an urban environment.

The days when we thought of missions as rural out-stations are long gone. Indeed, as Pope Francis told the delegates to the general congregation of Oblates of Mary Immaculate — the great missionary order that celebrates its 200th anniversary this year — earlier this month: “Today, every land is a ‘mission land’, every dimension of human life is mission territory awaiting the proclamation of the Gospel.”

And that proclamation of the Gospel finds its most formidable expression in action. When Holy Trinity opens its doors to frightened students from Wits — or feeds the homeless or offers ministry to the marginalised — it embraces, in the pope’s words, the “new poor, men and women with Christ’s face who ask for help, consolation and hope in the most desperate life situations”. When Fr Pugin blocked the entrance to the church property to provide a safe haven, the Gospel was proclaimed in words much louder than any sermon, to people who might have no interest in hearing sermons.

The example of Holy Trinity in Braamfontein is replicated, in many different ways, in parishes where the community acts in love and compassion to provide the opportunities for encounters with Christ.

On Mission Sunday we give thanks for those who left their homes to proclaim the Gospel in far-off lands. We have many such priests and religious in Southern Africa. Initially most of them came from Europe; now we benefit from missionaries from South Asia and other parts of Africa.

But the missionary task is assigned not only to people in holy orders and the consecrated life. Today all of us are called to be missionaries. Evangelisation is the business of every Catholic because, as Pope Francis puts it, “every dimension of human life is mission territory”.

In his message for Mission Sunday this year, the pope asks us to “go out as missionary disciples, each generously offering their talents, creativity, wisdom and experience in order to bring the message of God’s tenderness and compassion to the entire human family”.

At the heart of our words, deeds and demeanour must be mercy, which “is the strength that conquers all, that fills the heart with love and consoles with forgiveness”, as Pope Francis told a gathering of the Pallottine congregation this month.

Our Christian witness will not always bear fruit. As Fr Pugin was struck in the face by a rubber bullet when he witnessed to Christ, so will we face the metaphorical bullets of hostility, scorn and indifference.

But in mirroring God’s love, we will also touch people, sometimes in unexpected ways and even without our knowing it. And that is our mission today.