Dr Ifriky Tadadjeu is a satellite systems engineer, opera tenor, motivational speaker, entrepreneur, author, and devout Catholic who is known for his inspired singing at Mass and concerts. MANDLA ZIBI talked to the all-round talent. 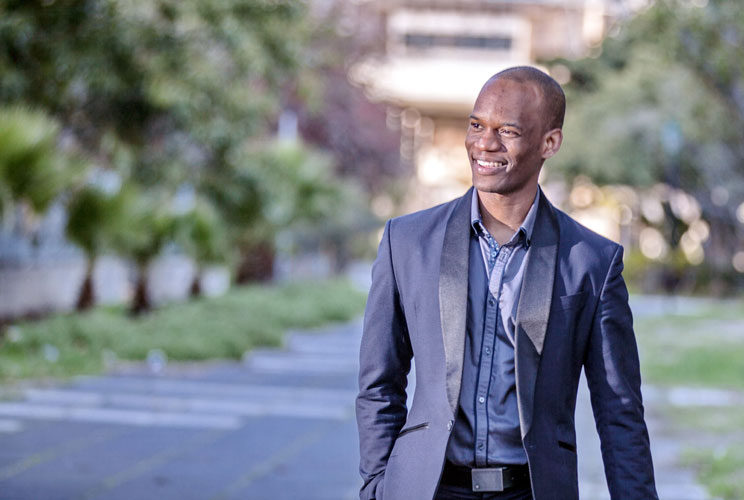 Once in a while you come across someone who defies the neat categories we use to make sense of the apparent messiness of human endeavour. Dr Ifriky Tadadjeu is such a person.

Born in Cameroon 30 years ago, this quietly spoken — but loudly singing — dynamo has always been in constant battle against the fixed idea that one’s career must be confined to an easily identifiable box.

“I do not recognise boundaries when it comes to the things I want to do with my life. My aim is to show young people that you can be what you want to be without sacrificing important, essential parts of yourself,” this modern-day “Renaissance man” told The Southern Cross in an interview.

Ifriky’s classically trained voice is a familiar feature at Our Lady of the Annunciation church in Milnerton, Cape Town, where apart from sacred music, he also sings popular opera. His version of “The Holy City (Jerusalem)” sends collective shivers down the congregation’s back, parishioners say.

He started his musical journey at age 15 back in Cameroon and became a musical director at 19, winning singing competitions along the way.

His CV boasts coaching stints with luminaries such as Prof Kamal Khan of the University of Cape Town’s Opera School and the well-known singer Wendy Fine, among others.

This year the tenor, who is said to have perfect pitch, released an album recorded with other top classical musicians in Cape Town, titled For The Love Of Music (it is available on his website www.ifriky.co.za).

“My musical approach is a merging of different styles. I mix operatic vocals with African cultural music,” he says.

He has been seen not only at high-profile corporate events around Cape Town but his music has taken him as far afield as Tokyo.

In church, Ifriky is lending his musical gifts to a programme that he calls “Let’s Pray”, with the aim being to “bring back the focus on prayer through singing”.

The idea is to reinterpret Catholic and Christian liturgical songs with a view to bringing out the prayer within.

“Sometimes when we sing in church, the real meaning of words is obscured, lost or forgotten. I would like to put together a group of musicians who would come to churches by invitation to really sing the prayers into life,” he said.

He envisages a series of engagements with churches through songs appropriate to liturgical seasons such as Lent and Advent.

“Music in the Church has been my faith anchor. I believe people experience faith in different ways. Mine is very much through music. Singing in church is a need,” he says.

Happily, his parish has a vibrant music ministry. He is also keen to help young people find their way.

Ifriky’s role as an entrepreneur and author is embodied by his campaign to “expose youth to as many fields of expertise as possible in order to increase the chances that they find something they are truly passionate about”.

Titled “Experts Mode”, the project will comprise a series of engagements or interviews with experts in various fields of activity to make it easier for young people to make decisions about which career paths to take.

“Young people don’t always know what they want to do with their lives, or know how realistic it is to follow their dreams. They do not always know how to predict future career trends and opportunities. Teachers, lecturers and corporate leaders don’t always find time for personal development or how to keep up with trends and innovation or pursue their own personal dreams and projects,” says Ifriky, pointing out that “Experts Mode” is designed to meet these needs.

“The interviews will be published every week on the project website, and each week will feature a different field of expertise. Some of the questions might include: the nature of a specific field of expertise; how it fits in with the world today; how one could cultivate wealth from it; and what practical steps to take immediately to enter the field and eventually become an expert.”

And then there is Dr Tadadjeu, the rocket scientist.

Ifriky’s doctorate as a satellite systems engineer saw him being part of the launch of the historic Tshepiso satellite in 2013, the first South African nano-satellite in space.

“I was part of the testing team in a project comprising postgraduate students from the Cape Peninsula University of Technology, working with the French-South African Institute of Technology  and the South African National Space Agency (SANSA),” he explained.

The satellite was launched from Yasny launch base in Russia and placed in orbit at an altitude of 1600km.

Running on the same amount of power as a 5-Watt bulb, Tshepiso orbits Earth up to 15 times a day and its main mission is to gather data on space weather for SANSA.

“I cannot disassociate the scientific and artistic sides of my life. They are both part of a mesh of things that ultimately define who I am. My contribution in life is to make people — young people especially — realise that their dreams are not crazy, that it is not necessary to give up on what you love just because people tell you there is no money in it.”

At just 30 years of age, it is quite clear that there is much to be heard from this young man whose zest for life really knows no bounds.