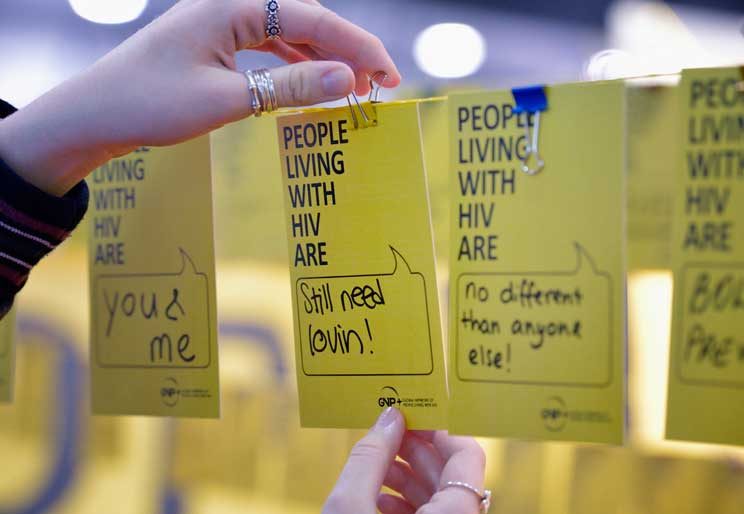 Messages like these aim to destigmatise HIV/Aids, which in turn encourages testing. While the administration of ARVs and greater awareness have made a positive impact, the crisis remains acute, as Sr Alison Munro OP explains.

Earlier this year, experts on HIV/Aids from around the world met in Durban to discuss the pandemic. For World Aids Day on December 1, SR ALISON MUNRO OP recalls some of the important outcomes.

Hundreds of journalists were present at the 21st International Aids Conference in Durban in July to ensure that the world was kept informed of the developments in HIV/Aids — and to make sure the crisis does not vanish from our radar.

They reported on scientific research into new drugs and vaccine trials, and of gains made in programmes reducing mother-to-child transmission of HIV, and of concerns around the adolescent epidemic now being experienced in sub-Saharan Africa.

There were sessions on the need to scale up prevention efforts alongside doubling the numbers of people on treatment, on the dangers of complacency, on TB co-infections and the simultaneous presence of non-infectious diseases such as hypertension, cholesterol and diabetes, and certain cancers.

The conference looked at why girls in particular are vulnerable to HIV, at how stigma and discrimination is an obstacle to effective prevention and treatment, and at difficulties in treating children.

Common themes were the United Nations Programme on HIV/Aids’ (UNAIDS) 90-90-90 strategy (more on that in a moment); where the money will come from to scale up programmes;  human rights issues; and  providing services to so-called hard-to-reach populations.

The first time when the International Aids Conference was held in Durban, in 2000, South Africa was a pariah in the field. Now South Africa is a leader in the response to Aids on various fronts.

A session on the role of faith communities highlighted some of the difficulties such organisations face in their particular responses to Aids, as well as at how the faith community response is viewed by others.

This coincided with a well-attended interfaith service at Durban’s Catholic Emmanuel cathedral. It was an aptly chosen venue given the late Archbishop Denis Hurley’s commitment to human rights and to the Aids agenda.

There is a recognition that in the faith community as a whole, services are often poorly documented and researched, that faith leaders and community workers need to be more knowledgeable regarding HIV,  that the use of sacred texts, the understanding of gender laws and of the concerns of people of different sexual orientations can be problematic.

We need gender justice, and we need to break down stigmas.

UNAIDS and PEPFAR — the US President’s Emergency Plan for Aids Relief — are looking to faith communities to help deliver services to reach the 90-90-90 targets.

In some countries, faith-based organisations provide most of the health care services.

But the world of faith is highly complicated, not homogeneous. Communities of faith need better connections with health care systems.

Anglican Archbishop Thabo Makgoba of Cape Town suggested that “HIV has exposed gaps in our teaching, and we face a challenge to blend theology and practical implications—a theology of compassion blended with human rights”.

HIV, he said, “has challenged the church to break its heart”.

Faith leaders and representatives of faith communities are called to particular action in reducing stigma and discrimination, increasing access to health services, defending human rights and ensuring treatment for children.

According to UNAIDS statistics there were 2,1 million new infections in 2015, bringing to 34 million the number of people infected with HIV and living with Aids globally. Of these, only 17 million are on antiretroviral treatment, and the challenge is to get another 17 million people on treatment.

Every day about 4 000 people die from TB, a common co-infection with HIV, often not diagnosed and not treated early enough.

Men, so-called key populations (which include commercial sex workers, gay people, prisoners and drug users), and young people are missing at every level along the continuum of care and treatment.

There are new challenges around HIV in migrant populations. And while between 2000 — when South Africa first hosted an International Aids Conference — and 2016 there were successes regarding treatment  and the reduction in rates of mother to child transmission, “the face of the epidemic is becoming younger” and there is still “a long way to go to eliminate HIV infections”, according to Luis Loures, deputy executive director of UNAIDS.

In South Africa, we are faced with these statistics:

– There are 7 million people living with HIV. Of these 4 million are women aged 15 and over.

We need vaccines—the single most effective tool to prevent HIV transmission — while recognising that vaccine efficacy decreases over time, influenced by “distracting” antibodies.

Vaccine trials are “open for business” with a new trial due this year in several countries, including South Africa. Some vaccines have failed, and some trials have regrettably had to be stopped.

South Africa, in partnership with UNICEF, is “embarking on the last mile” in the quest to eliminate the transmission of HIV to infants, according to Dr Yogan Pillay of the Department of Health.

South Africa’s Prevention of Mother-to-Child Transmission programme has had great successes, leading to a great decline in the transmission rate, now at 1,1% at birth.

There are 800000 mothers in support groups on the Mom Connect Programme. Exclusive breastfeeding as a means of protecting infants, and adherence on treatment, are being promoted, and stigma being addressed.

But at the same time children under 15, undiagnosed and untreated, are falling through the cracks.

Why girls are so vulnerable to HIV infection has been shown to be associated with bacteria in the genital tract which facilitate inflammation and genital tract infection.

In Southern Africa men in their 30s are exposing young girls to HIV, the same men themselves infected by women in their thirties.

Testing and treatment needs to be scaled up to break the cycle of HIV, as well as medical male circumcision rolled out to men by the age of 25.

Education and the changing of community norms are key.

In Durban there were passionate pleas for and by young people that they not be left out. They want recognition as agents of change and as partners in the fight against Aids.

There were calls for stigma and discrimination to be addressed, for infections in young people to decrease, for more adolescents to go on treatment, for issues of sexuality to be talked about, for support around adherence.

Difficulties around treatment because of stigmas are real, and drug resistance among adolescents is set to become a major problem.

The ageing of people on antiretroviral treatment and the associated non-communicable diseases are also being studied in different countries.

People on ARV treatment are living longer, but there are co-morbidities, with cardiovascular disease seen as a leading cause of death.  The need for good nutrition, and exercise, for reducing drug intake, alcohol consumption and obesity, is as important in people living with Aids as it is in the general population.

A new treatment paradigm is needed. Because it is not easy for someone to take medication daily over the course of a lifetime, it is recognised that long-acting drugs would help ease the pill burden that many patients struggle with.

There are viral reservoirs in the body which never forgets its exposure to HIV. Aids rebounds within two to three weeks when treatment is stopped, no matter how long one has been on treatment.

TB is a leading cause of death among people with Aids, and there is a need to start TB/HIV treatment quickly.  While antiretroviral treatment prevents TB, patients should be given drugs for both Aids and TB to maximise prevention.

It is estimated that the funding needed globally to end Aids by 2030 is $26 billion a year. That figure stands against the stark reality of the funding gaps.

There were calls at the Durban conference for the repoliticisation of the Aids agenda since while we know the solutions — prevention, treatment, adherence, vaccines—governments are aligned to private sector interests; services are privatised and denied to 90% of the people.

The next four years, it was said, are critical if Aids is to end by 2030, and we are not to revert to where we were in 2000 when the benefits of treatment arrested the numbers of deaths among people with Aids.

And at the same time governments must deliver on human rights and gender equality and do away with laws that criminalise Aids.

“We need enraged activists,” said Justice Edwin Cameron, the Constitutional Court judge, and “we have to test, test, test — the  gateway to knowledge and treatment.”

Dominican Sister Alison Munro is the coordinator of the Aids Office of the Southern African Catholic Bishops’ Conference.