The life of a bishop ‘born again’ into Vatican II

A STILL AND QUIET CONSCIENCE: The Archbishop who challenged a Pope, a President and a Church: A Life of Raymond G Hunthausen, by John McCoy, Orbis Books (2015). 288pp 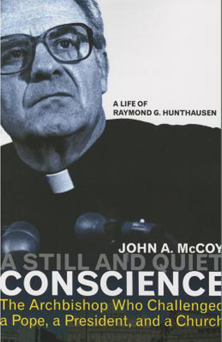 The name Archbishop Raymond Hunthausen was often mentioned in the Catholic press in the 1980s. The US bishop was most famous as the leader of the Seattle archdiocese who decided to withhold part of his federal taxes and invited other Americans to do the same, because of his opposition to the nuclear-armed Trident submarines based at Seattle.

Archbishop Hunthausen also became increasingly well-known as someone who was disciplined by the Vatican in a succession of what the author John McCoy sees as “ill-considered and unprocedural interventions” throughout the ‘80s.

First there was a secret investigation undertaken by Archbishop James Hickey of Washington D.C. This was followed by the appointment of an auxiliary bishop, who was given “special faculties” to take over responsibility for several delicate issues which Cardinal Ratzinger of the Congregation for the Doctrine of the Faith, believed were being treated in a less than orthodox way by the archdiocese. When that intervention failed dismally it was followed by another investigation, by three cardinals and one archbishop, which led to the appointment of a coadjutor-archbishop who was supposed to lead the archdiocese in tandem with Hunthausen. However, with the best will in the world, they found it unworkable, “like having two drivers for one car”, said Hunthausen.

All the successive steps taken against him were extremely humiliating for the archbishop and opposed by a large majority of his nearly 400 priests. Eventually Archbishop Hunthausen was worn down by these signs of Vatican disapproval, and resigned in 1991, six years before reaching the obligatory retirement age of 75, making way for the coadjutor to take complete control.
But Hunthausen — who is now 95 years old — should also be famous as what McCoy calls “a quintessential Vatican II bishop”, “born again” as a result of his experience of the Council which began just weeks after his episcopal ordination.

McCoy had earlier wanted to write a biography of Hunthausen — whom he had served as communications officer — but had abandoned the idea because the papacies of John Paul II and Benedict XVI seemed so hostile to Hunthausen. It was only the election of Pope Francis, and the new note he struck right from the commencement of his papacy, that changed McCoy’s mind about the value of writing a life of Hunthausen. “[Francis] reminds me in many ways of Hunthausen. He’s humble, kind, compassionate, plain spoken and unpretentious. He has a Vatican II vision of a church that is inclusive, loving, and transformative, of a church with a heart for the poor and the oppressed.”

The Council had transformed Hunthausen. He embraced the new concept of the Church as the People of God, a new idea of his role as a bishop as “servant leader who convenes, collaborates and inspires, rather than dictates, reprimands and proscribes”.

As a bishop, Hunthausen’s  approach was to present a vision without giving clear directions. He treated his staff and priests as colleagues, giving them autonomy and letting them determine how they would put the vision into practice. This was a style that McCoy describes as one of Hunthausen’s greatest assets and at the same time one of his greatest liabilities. It would lead to Cardinal Joseph Ratzinger’s criticism that a “permissive climate” characterised the archdiocese.

Cardinal Ratzinger insisted that the archdiocese withdraw support from any homosexual group that did not clearly support Church teaching and scolded Hunthausen for his “ill-advised welcome of a homosexual group to his cathedral”. And he added a rather vague reference to “a number of basic doctrinal problems that affect the day-to-day life of the church in Seattle”.

But Cardinal Ratzinger also praised Hunthausen for “implementing the renewal envisioned by the Council, including lay participation, the creation of consultative bodies, and applying the Gospel to world issues”.

This is an important book for all who are interested in the “unfinished business of Vatican II”. One will inevitably speculate whether Hunthausen would have had a different fate in the papacy of Francis.