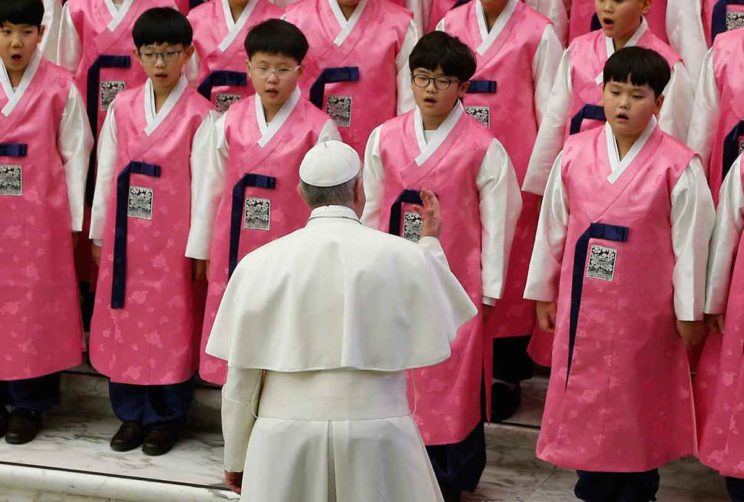 Christian hope isn’t about believing in something that may or may not come true, like hoping tomorrow’s weather will be pleasant, Pope Francis said.

“Christian hope is the expectation of something that already has been fulfilled and that certainly will be attained for each one of us,” that is, knowing Christ died and is truly risen so that all of humanity may gain salvation and live together with God, the pope said Feb. 1 during his weekly general audience.

Continuing a series of talks on Christian hope, the pope looked at  Paul’s First Letter to the Thessalonians (5:4-11) and what it teaches about the Christian belief in life after death.

The early Christian community at Thessaloniki was firm in its belief in Christ’s resurrection, but trusting in one’s own resurrection and the resurrection of loved ones was a bit harder to grasp, the pope said.

Such doubts and uncertainty still exist today as “we all are a little afraid of dying,” he told those gathered in the Paul VI audience hall.

St Paul, he said, writes words of encouragement, telling Christians to arm themselves against the onslaught of doubt and difficulties by “putting on the breastplate of faith and love and the helmet that is hope for salvation.”

This kind of hope, the pope said, has nothing to do with wishing for “something nice,” something “that may or may not happen.”

“For example, people say, ‘I hope it will be nice weather tomorrow,’ but we know that it might be terrible weather instead.”

Christian hope isn’t like that, he said. It is belief in “a sure reality” because it is rooted in the real event of Christ’s resurrection and his promise of eternal life with him.

It’s knowing and seeing that “there is a door over there,” he said, pointing to the entryway into the Paul VI audience hall.

READ  How a Sketchbook Led a Chinese Woman to Faith

“There is a door. I hope to get to the door. What do I have to do? Walk toward the door. I am sure I will make it to the door. That is what Christian hope is like. Being certain that I am walking” with that destination, he said.

Christian hope is living like an expectant mother, the pope said.

“When a woman realises she is pregnant, she learns to live each day in expectation of seeing her child’s gaze,” he said.

Everyone needs to learn to live each day with this same joyful anticipation – “to live in expectation of gazing at the Lord, of finding the Lord,” he said.

Learning to live in “sure expectation” isn’t easy, but it can be learned, he said.

“A humble, poor heart” knows how to wait, but it is difficult for someone who is “full of himself and his possessions.”

The pope asked everyone to repeat aloud with him Paul’s words (1 Thessalonians 4:17) as a way to find peace and consolation, knowing that one day the faithful will be united with God and their loved ones: “Thus we shall always be with the Lord.”

At the end of his main audience talk, the pope greeted members of the Global Catholic Climate Movement, which seeks to act upon the pope’s encyclical “Laudato Si'” and address climate change.

He thanked them for their dedication to “taking care of our common home during this time of serious social-environmental crisis.”

He encouraged them to continue to expand and strengthen their networks “so that local churches may respond with determination to the cry of the earth and the cry of the poor.” By Carol Glatz Catholic News Service