What Are Chastity and Celibacy? 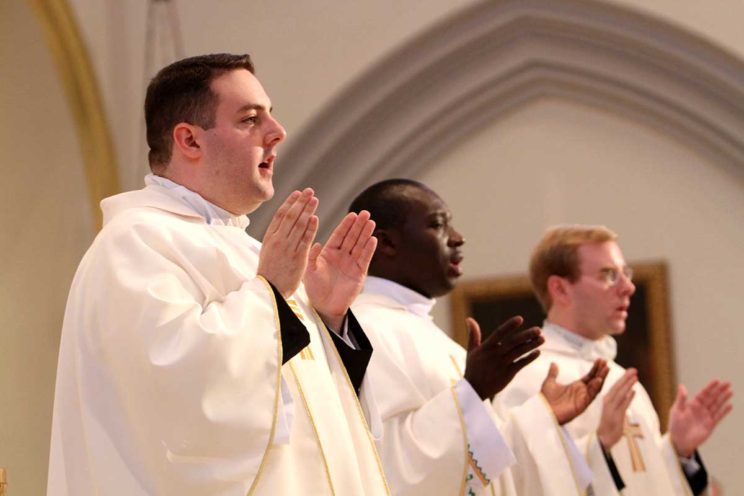 Priests at their ordination. When diocesan priests enter the clerical state they make a “promise” of celibacy, whereas their religious counterparts—priests who belong to religious orders—take a “vow” of chastity. In this interview, Fr Michael Fuller explains the difference and other areas of frequent confusion. (Photo: Gregory Shemitz)

What does the Church mean by chastity and celibacy? Do priests make a vow of celibacy?  Does priestly celibacy lead to sexual abuse? A doctrinal expert offers answers to these and other questions

Last month, three weeks of testimony from Australia’s Royal Commission of Inquiry into Institutional Responses to Child Sexual Abuse have included many discussions about whether celibacy might be a factor in clergy sexual abuse.

Catholic News Service asked Fr Michael Fuller, executive director of the Secretariat of Doctrine and Canonical Affairs at the US Conference of Catholic Bishops, to explain the difference between celibacy and chastity, a promise and a vow.

What is celibacy? Do priests take a vow of celibacy?

Simply put, celibacy is a promise not to marry and is based on the passage from St Matthew’s Gospel where Jesus says, some “have renounced marriage for the sake of the kingdom of heaven”.

In the Latin rite, candidates for the priesthood, when they become deacons, make a promise of celibacy along with other promises, such as the promise to hold true to the mystery of faith, to maintain and deepen the spirit of prayer, and to conform their lives to the example of Christ.

All of these promises are for the sake of the kingdom and for the service of the people of God.

The promise of celibacy, of not to marry, is seen by the Church as not only a gift of the person to God, but even more so, a special grace given to the priest that will allow him to faithfully serve the people.

Is there such a thing as mandatory celibacy as opposed to voluntary celibacy?

The promise of celibacy is one that a person freely resolves to follow. Some people argue that it is mandatory, but that word is not used by the Church and conveys a certain negative attitude towards the gift of celibacy.

It is true that celibacy, along with all the other promises a priest makes, is obligatory—meaning that they are part of what it means to be a priest in the Latin rite.

What always must be remembered, however, is that no one is forced into becoming a priest; it is a decision that is—and must—be made freely and without any coercion.

It is also a decision that can only be made after years of discernment and study, and part of that study and discernment includes understanding what a life of celibacy entails. After such discernment, the promises of celibacy, prayer, imitation of Christ, and obedience are freely made at ordination.

Why do some people suggest that not being married might be a cause for child sexual abuse?

This is a difficult one, and must first be answered by the fact that studies conclude that there is no link between celibacy and child sexual abuse.

For thousands of years, and in many different religious traditions, celibacy has been practised and has not been a cause for child sexual abuse. In our times, people have a great difficulty in thinking anyone could live a life of celibacy—even with the countless number of people who do—and so they think that there must be a link between the two.

Our culture today is oversexualised, which has led us to think that sexual relationships are something unreasonable or unnatural to forgo, and so when there is a crisis such as child sexual abuse, people believe there is a link, when of course, there is not one.

Sadly, child sexual abuse is all too common, and involves abusers from all walks of life and it is something that should never happen.

One good that has come out of this crisis is the growing awareness of this terrible abuse, which is leading to better means of prevention.

What is chastity and how does it differ from celibacy?

Chastity is a virtue that everyone is called to live by; it is the state of being chaste. Chaste comes from an old Latin word which means being pure from any unlawful sexual relationships.

In other words, chastity is the virtue of living out your sexual life in the proper way, which is, if you are married, to be sexually intimate only with your spouse and, if you are unmarried, to refrain from sexual intimacy with anyone, for the proper place for sexual relationships is within a marriage.

Therefore, chastity is a virtue that should be lived out by everyone, according to their state of life. The person who chooses celibacy promises to remain unmarried for the rest of his life. In this case, to practise the virtue of chastity means he will refrain from all sexual relationships.

Are only priests called to be chaste, or is that expected of everyone? Do people make vows of chastity?

Everyone is called to chastity, as defined by their state of life. Men and women who enter the religious life do make a vow of chastity.

The vow of chastity is one of the three evangelical counsels that a person entering the religious life vows to follow. The three counsels are obedience, chastity and poverty.

Each religious community—such as Franciscans, or Dominicans, or Benedictines—will have different ways of expressing these, but they are the common denominator of religious life.

The vow of chastity that a religious professes is to live in a state of integrity regarding sexuality, which, in this case, means to forgo sexual relationships. In practice, it looks just the same as celibacy, but is not called celibacy because of the difference between a vow and a promise.

What is the difference between a vow and a promise?

These two often get confused, and people often think that a vow is more serious than a promise. That is not true; they are both equally strong and serious.

A vow is a personal act of devotion in which you promise to live a certain way in order to grow in charity as a disciple. A vow, then, is directed towards your personal salvation.

A promise is directed differently, in that the focus is on others. A promise, then, is also an act of devotion, but one that is directed to growing in charity by serving God in a specific way that involves a focus on his Church, his people.

In the sacraments we make promises, because they always involve the community of faith, whereas a vow is more personally focused.

A vow is a promise a person makes to God. As the Catechism of the Catholic Church states: “A vow is an act of devotion in which the Christian dedicates himself to God or promises him some good work” (2102).

So, a man or a woman entering the religious life, out of devotion to God, promises to live a life of chastity, obedience and poverty. It is something where he or she says, I am doing this out of love for God and for the salvation of my soul.

Priests and deacons, however, do not take vows, but they do make promises, which are equally binding.

A promise is made for the sake of the kingdom and for the Church. In the sacraments of baptism, confirmation, holy orders and marriage, promises are made—and therefore, it is not technically correct to say marriage vows.

In baptism, you promise to  live as a disciple of Christ, rejecting Satan and all his works, and to serve God faithfully in his holy, catholic Church. In the promise of celibacy, you promise to remain unmarried for the sake of the kingdom of heaven and at the service of God’s people.—CNS

‘Cooking Priest’ Shares Recipe to Help Teens Get to Heaven