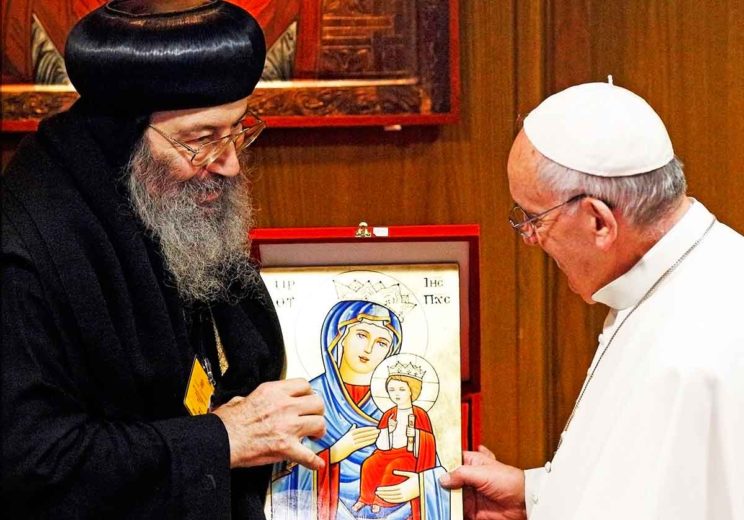 Pope Francis accepts an icon from Coptic Orthodox Metropolitan Bishoy of Damietta, Kafr El-Sheikh and Bararya. The pope will visit Cairo at the end of April (Photo: Paul Haring/CNS)

In response to an invitation from President Abdel-Fattah El-Sisi, the Catholic bishops in Egypt, Coptic Orthodox Pope Tawadros II and Ahmad el-Tayeb, grand imam of al-Azhar University, “Pope Francis will make an apostolic trip to the Arab Republic of Egypt,” the Vatican announced March 18.

While saying details of the trip would be published soon, the announcement said the two-day trip would be focused on Cairo, the capital city.

It will be the pope’s 18th trip abroad in his four years as pope and the seventh time he visits a Muslim-majority nation. He will be the second pope to visit Egypt after St. John Paul II went to Cairo and Mount Sinai in 2000.

The invitation came amid increasingly closer relations between the Vatican and al-Azhar, which is considered the most authoritative theological-academic institution of Sunni Islam.

El-Tayeb visited the pope at the Vatican in May 2016 – the first time the grand imam of al-Azhar was received by the pope in a private meeting at the Vatican.

The pope later told reporters that in his 30-minute discussion with the grand imam, it was clear that “they are looking for peace, for encounter.”

“I do not think it is right to identify Islam with violence,” the pope told reporters. “This is not right and it is not true.”

Pope Francis also has upheld the importance of strengthened cooperation between Catholics and Coptic Orthodox Christians. In the face of so many challenges, he has said, “Copts and Catholics are called to offer a common response founded upon the Gospel” and give a shared witness to the sanctity of human life, family life and creation.

Given the increased persecution against Christians, the pope has told Coptic Pope Tawadros, “Today more than ever we are united by the ecumenism of blood, which further encourages us on the path toward peace and reconciliation.”  By Carol Glatz, Catholic News Service