Behind Hatred and Violence is an Unloved Heart 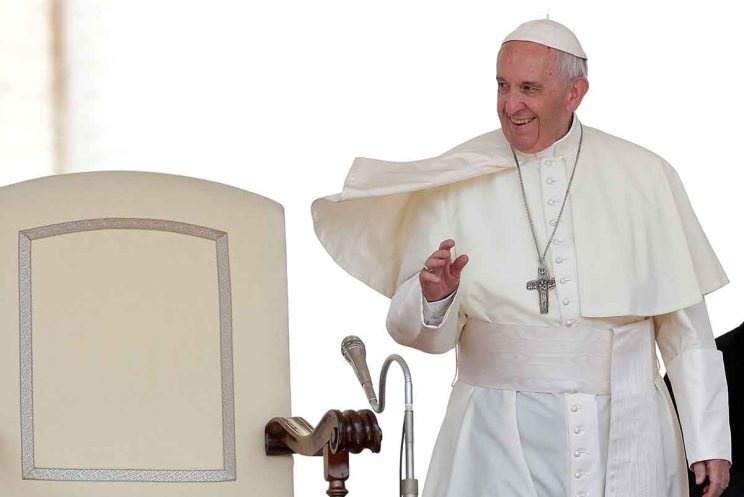 Violence and hatred often are signs that a person is unhappy and feels unloved and unwanted, Pope Francis said.

In today’s world, people – especially children and youths – often feel that unless “we are strong, attractive and beautiful, no one will care about us,” the pope said during his weekly general audience.

“When an adolescent is not or does not feel loved, violence can arise. Behind so many forms of social hate and hooliganism, there is often a heart that has not been recognised,” he said.

Despite a heat wave that brought temperatures close to 90 degrees, an estimated 12,000 pilgrims donning colourful hats and umbrellas cheered and waved as the pope entered St. Peter’s Square.

Pope Francis took a moment to greet the sick who were watching the audience from indoors because of the hot Roman weather.

“They are in the Paul VI hall and we are here,” the pope told the crowd in the square. “But we are all together; we are connected by the Holy Spirit who always unites us.”

In his talk, the pope focused on the certainty of hope that comes from feeling loved as children of God.

When men and women do not feel loved, he said, they run the risk of succumbing to the “awful slavery” of believing that love is based solely on one’s appearance or merits.

“Imagine a world where everyone begs for reasons to attract the attention of others and no one is willing to love another person freely,” he said. “It seems like a human world but, in reality, it is a hell.”

Feelings of loneliness, he added, often lead to “man’s many narcissisms” and can be conquered only by an “experience of love that has been given and received.”

God, who never needs a reason to love his children, has that kind of unconditional love for each person, the pope said. “God does not even bind his benevolence to our conversion; if anything that is a consequence of God’s love.”

Recalling his time as archbishop of Buenos Aires, Argentina, the pope said he saw God’s unconditional love reflected on the faces of mothers who went to the local prison to visit their children.

“I remember so many mothers in my diocese who would get in line to enter the prison. So many mothers who were not ashamed. Their child was in prison, but it was their child and they suffered so many humiliations, “the pope recalled.

“Only this love of a mother and father can help us understand God’s love,” he said, adding that “no sin, no wrong choice can ever erase it.”

Departing from his prepared remarks, Pope Francis asked the crowd, “What is the medicine that can change an unhappy person?”

“Very good, very good,” the pope said. Christian hope comes from knowing “God the Father who loves us as we are. He always loves us, everyone, good and bad.” By Junno Arocho Esteves Catholic News Service