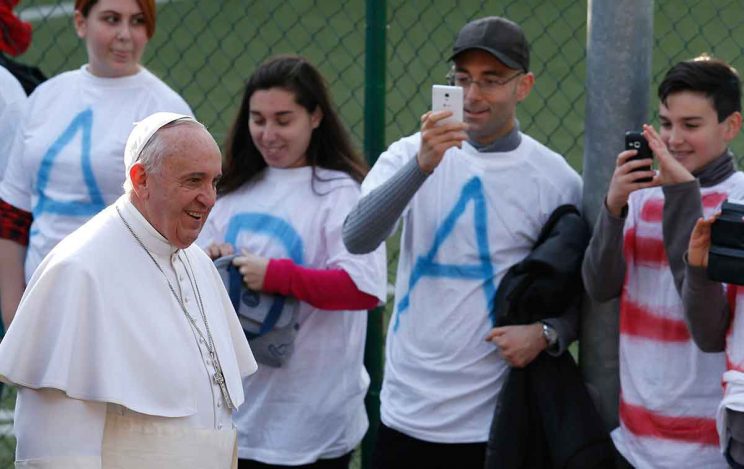 Pope Francis with young people. “A child who does something wrong must be corrected, but never treated as an enemy or an object on which to take out one’s own frustrations,” the pope has said. (CNS photo/Paul Haring)

Pope Francis offers very good advice on how to discipline children effectively and in a Christian manner, as ANNE BAKER finds.

I  am an unashamed Tweeter. I get all my news on Twitter (being careful to check for fake news).

When I read these short extracts I realised that I would need to read the full text  of Amoris Laetitia.

Here is the full passage of Cardinal Napier’s first tweet:

“Correction is also an incentive whenever children’s efforts are appreciated and acknowledged, and they sense their parents’ constant, patient trust. Children who are lovingly corrected feel cared for; they perceive that they are individuals whose potential is recognised. This does not require parents to be perfect, but to be able humbly to acknowledge their own limitations and make efforts to improve.

“Still, one of the things children need to learn from their parents is not to get carried away by anger. A child who does something wrong must be corrected, but never treated as an enemy or an object on which to take out one’s own frustrations,” Pope Francis continued.

“Adults also need to realise that some kinds of misbehaviour have to do with the frailty and limitations typical of youth. An attitude constantly prone to punishment would be harmful and not help children to realise that some actions are more serious than others. It would lead to discouragement and resentment.”

The pope then draws from St Paul’s epistles: “Parents, do not provoke your children!”

What this brought to mind for me was the teacher’s role as in loco parentis, Latin for “in place of the parent”.

This means that schools take on some of the responsibilities of the parent. Parents entrust their children to teachers in the belief that teachers will care and support them. Therefore the Catholic school attempts to develop a “family” atmosphere.

We can, therefore, look at this quote and ask how it applies to schools? Do the children and young people in our Catholic schools “sense their parents’ [or teachers’] constant, patient trust”?

What does the pope’s writing say about how teachers discipline children at school. Are children “lovingly corrected, feel cared for and perceive that they are individuals whose potential is recognised”?

We can continue to read asking similar reflective questions for the rest of the paragraph.

The next paragraph offers us further reason to reflect on how we discipline the children in our care.

“It is important that discipline not lead to discouragement, but be instead a stimulus to further progress. How can discipline be best interiorised? How do we ensure that discipline is a constructive limit placed on a child’s actions and not a barrier standing in the way of his or her growth?” the pope asks.

He proposes: “A balance has to be found between two equally harmful extremes. One would be to try to make everything revolve around the child’s desires; such children will grow up with a sense of their rights but not their responsibilities. The other would be to deprive the child of an awareness of his or her dignity, personal identity and rights; such children end up overwhelmed by their duties and a need to carry out other people’s wishes.”

Child is never an enemy

During 2016, as part of the Building Peaceful Catholic Schools Programme (BPCSP), a climate survey was carried out with 4773 Grade 6 and 7 learners in selected schools. Sadly, 52% say that they have experienced corporal punishment at school. Does this not lead to the discouragement mentioned above?

Pope Francis says that “a child who does something wrong must be corrected, but never treated as an enemy or an object on which to take out one’s own frustrations”.

The BPCSP offers a different way of assisting learners to take responsibility for their actions and assists them to “make things right”.

Based on the principles of restorative justice, the programme requires a whole school approach where positive, respectful relationships are actively fostered by leadership and staff. It is not a quick or easy fix; it requires a plan to bring about meaningful change.

Linked to the BPCSP is a pilot peer-mediation programme. It has been heartening to see how the young people involved have embraced their role as peacemakers.

In addition to assisting the school community to take responsibility and to put things right, the BPCSP also aims to develop listening skills, empathy, speaking from their own experiences and a fair attitude.

But the papal extracts above are destined for parents. When we work with schools we often hear the lament that parents don’t care about the school, aren’t bringing their children up appropriately, and that children today are different.

This leaves us with the question of how we can involve parents in the school. Do we genuinely consult with them in an open and accepting manner? Do we share our vision for our school and for the wellbeing of their children?

The Catholic Institute of Education has experienced very high levels of parental involvement in its Health Screening Programme. Parents accompany their children, and, as would be expected, are intensely interested in their health.

There is no easy answer to better parental involvement but maybe a conversation with a small group could shed light and enable schools to truly develop the school-parent partnership.

Anne Baker is the deputy director of the Catholic Institute of Education.