In Awe of the Eucharist 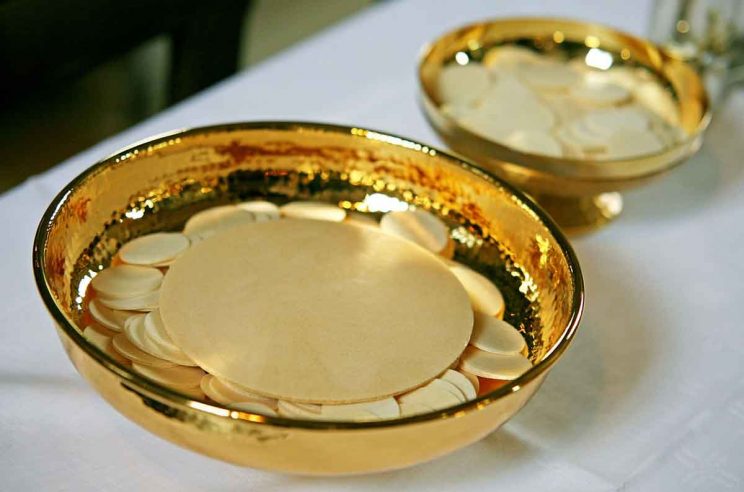 By Archbishop Buti Tlhagale OMI – Pope John Paul II declared 2005 the Year of the Eucharist.  At the conclusion of that year, he canonised five saints distinguished for their Eucharistic piety. He also issued the apostolic letter Mane Nobiscum Domine and an encyclical, Ecclesia de Eucharistia (2005), on the mystery and worship of the Holy Eucharist.

Pope Benedict continued on the same theme with his post-synodal apostolic exhortation Sacramentum caritatis (The Sacrament of Charity). In 2004 the Congregation of Divine Worship issued an instruction on the sacrament of redemption. These valuable documents address the mystery of the Eucharist, and are closely related to the priesthood.

In Johannesburg archdiocese, we can hardly boast of a good grasp of these documents and the teaching they contain. My strong plea to the priests: put these documents within the reach of your parishioners. Help us translate them into vernacular languages where necessary. This is one way of reawakening and increasing Eucharistic faith. This is the supreme treasure of the Catholic Church.

While the Eucharist and Eucharistic adoration did not emerge as a major theme at Johannesburg’s diocesan synod last September, it is no doubt the basis, the foundation, the cornerstone of the themes adopted by the synod.

Turning our attention to the Eucharist and Eucharistic adoration can only enhance and deepen the themes adopted by the synod.

The Eucharist is the source and summit of all that the Church is and does. The breaking of the bread has always been at the centre of the life of the Church, as John Paul II noted in Mane Nobiscum Domine. The Eucharist holds within itself the whole spiritual treasure of the Church.

Through the ministry of the priest, Christ entrusted to us a memorial of his own passion and resurrection. The memorial makes effectively present here and now an event in the past, the death and resurrection of Jesus Christ. The power of these events touches and transforms us.

In baptism and in the Eucharist we enter into a communion of life and mission with the crucified and risen Lord. We take upon ourselves his mission to transform both our lives and the lives of others. The Eucharist is the most precious gift, the pearl of great price given to the Church by the Lord himself. After receiving both the Body and Blood of Christ, we say Amen, affirming the real presence of the Body and Blood of Christ himself. His invisible presence is made visible through the visible signs of bread and wine.

The Eucharist gives Catholics their unique identity. The non-celebration of the Eucharist because of the shortage of priests weakens this Catholic identity.

When there are serious and deep divisions and conflicts in our ranks as priests and in our parishes, then we contradict the spirit of the Eucharist which is a sacrament of love, a sign of unity and a bond of charity (Sacramentum caritatis).

One of the chief duties of a priest is to be a faithful disperser of the mysteries of God. To him it is given to lead his people to faith and conversion. How are they to believe in him they have not heard? How are they to hear if no one preaches, and how are men to preach unless they be sent? (Rom 10:14)

Many have said that Eucharistic adoration promotes vocations to the priesthood and to religious life. Children, youth and adults should be taught to appreciate the beauty of silence in the presence of Jesus Christ.

Our attitude, external behaviour, our gestures, our bodily movements reveal our faith, or our lack of faith, in the invisible presence of God, in the real presence of Christ in the Eucharist, in the consecrated hosts in the tabernacle. Many enter the church and do not make the sign of the cross with holy water. Many no longer genuflect, or even bow to acknowledge the presence of Christ in the tabernacle. Altar rails have been dismantled, thus we no longer kneel when receiving the Body of Christ. Our churches are like a market place before and after Mass partly because we have moved the tabernacle to a separate room, or simply because we have lost the sense of the presence of the holy. We have abandoned silence and a prayerful atmosphere in the church.

Where possible, we need to restore the centrality of the tabernacle. We need to recover the culture and practice of genuflecting and of silence.

Church law requires us to fast for an hour before the Eucharist. The chewing of gum during Mass is simply distasteful.

External gestures help to condition our internal spiritual attitude towards the holy. By putting in church pews without kneelers, we effectively discourage the faithful from kneeling during consecration.

The taking of Communion to the sick often leaves much to be desired. Usually consecrated hosts are distributed to lay ministers after Communion. And the priest asks: How many? How many what? It does not sound like a language of people who recognise the presence of the Lord.

Lay ministers carrying Communion often stop to chat with friends before going to the sick. At times they rush to shop before proceeding to the sick. Some keep the consecrated hosts at home because they did not find the sick person or because on their return, they found the church locked.

It is not unusual for tabernacles to be broken open (or stolen) and the consecrated hosts scattered about on the floor. It is not enough simply to collect the hosts and put them back into the tabernacle. There is a need for a cleansing rite and for repentance.

It is most edifying to see the priest praying with altar-servers in the sacristy before and after Mass. Silence in the sacristy is also conducive to an atmosphere of prayer. Such a practice stays with the altar-servers long after they have graduated from the sacristy. Some sacristies regrettably are like a market place. No prayers are said.

It would be ideal if priests could once more pray while they vest in the sacristy. This practice would reinforce the culture of silence and a proper preparation for Holy Mass.

It would equally be ideal to restore for the lay faithful prayers before the Mass and prayers of thanksgiving after Mass. Such exercises would help us to focus on the real presence of Christ who has been received during Mass.

As custodians of the Eucharist, it is our privilege to promote Eucharistic adoration so that those who do so may savour the grace of healing that comes from the Lord himself.

Young people read novels. I plead with the priests, deacons and catechists to introduce young people to John Paul’s, Pius XII’s and Benedict XVI’s writings on the Eucharist and on Eucharistic adoration.

We therefore wish to propose Eucharistic Adoration to be enacted in every parish community where such a practice does not yet exist. We also recommend that it be the theme of the archdiocese for the next three years in order for a Eucharistic movement to emerge. We strongly recommend a return to the processions of Corpus Christi in order to give public witness to our faith.

In the Mass, Jesus Christ is the ultimate form of eucharistia, that is thanksgiving. He is the perfect expression of praise to the Father. His act of thanksgiving makes our sacrifice possible. Before such a great sacrament, we can only echo the words of the centurion: Lord I am not worthy that you should enter under my roof, but only say the word, and my soul shall be healed (Mt 8:8).

We have a compelling duty to raise the bar with regard to Christ’s Real Presence in the Eucharist.

This is an edited version of Archbishop Tlhagale’s homily at the Holy Thursday Mass for priests of the archdiocese of Johannesburg. Updated from May 2009