Do I see God in the poor as Christ instructed me? Matthew 25:31: All the nations will be gathered in his presence, and he will separate the people as a shepherd separates the sheep from the goats.  He will place the sheep at his right hand and the goats at his left. 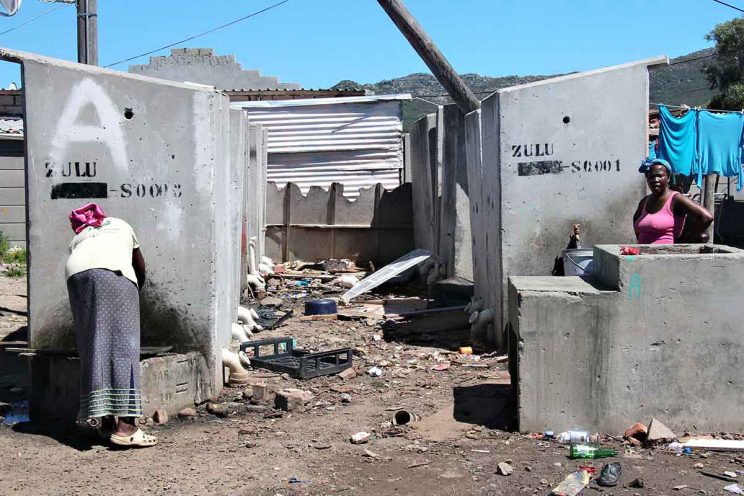 Women in Masiphumelele township in Cape Town, near the upmarket suburbs of Noordhoek and Kommetjie. South Africa is the economically most unequal country in the world. (Photo: Sydney Duval)

One of the greatest gifts Christ gave the Church is the Eucharist. And among the strengths of Catholicism is the daily Eucharist. As a convert it remains my greatest attraction and profound source of means to purify my life into walking in humility with God. I love that at some point during the course of my day I am able to kneel in the pew and empty my thoughts into God’s silence of self-surrendering love.

In it I see, in a gentle way, my moral maladies, and those of my country. For instance, it bothers me that my faith is unable to move mountains. What do I mean by this? That I do not see God in the poor as Christ instructed me.

How unequal is SA?

According to international confederation of charitable organisations Oxfam, South Africa is the most unequal country in the world, with a 10% minority, largely white, controlling 65% of the wealth. Three billionaires, all of them white males, own as much wealth as half the population — 28 million people — combined.

Only 3% of companies listed on the Johannesburg Stock Exchange are majority black-controlled. Some 71% of blacks earn less than the country’s official living wage of R6880 a month, while the former CEO of Shoprite/Checkers was paid R100 million when he left the company, and is now demanding R1,8 billion in shares. A cashier there earns R2150 a month….

Half of black youths are unemployed while, according to the Forbes Index, one third of Africa’s richest billionaires live in South Africa, and are mostly white.

This is stated in racial terms not to antagonise the white community, but to explain why, among other things, racial harmony is so difficult to achieve in this country.

Take our recent preoccupation with state capture by dodgy business people like the Gupta family.

Most people are rightly outraged by it, but many white people are blind to the need to extend that outrage into smoking out the illicit financial activities by our big companies that cost the country more than the Guptas, and they say little about trading and price-fixing cartels in construction, retail, and so on.

In white discourse there is an urgency about taking government to task, rightly so, for its grave constitutional failings to provide shelter, adequate education and access to quality health. They correctly see that we require political leadership with ethical conviction and a discernible moral core.

This is good, but then the same discourse fails to extend these demands to business leadership also. And that double standard — to put it bluntly: corrupt “black” government is criticised but corrupt “white” business isn’t — sows the seed for racial disharmony.

Secondly, since 1994, our ruling party has been co-opted to be the guardians of the evils it fought against when it was a liberation movement.

In blaming everything on “White Monopoly Capital”, the government seeks to distract our attention away from their failings and rot. In turn, capital, through its powerful voice within the media, wants us to concentrate on the government and the corruption within the ANC.

And they all act in the hope that no one will talk about real radical and democratic redistribution of wealth and economic power, based on solidarity and the common good — not the profits of the investor class.

Rev Martin Luther King Jr, in his final years, inveighed eloquently against what he called “the triple evils that are interrelated”. He boiled them down to the essence of the capitalist class, which co-opts through money the political class to do its bidding of greed (in the US this corruption is effectively legalised through the lobbying and campaign-funding system).

Rev King came to the end of his martyred life with the belief that the real faults in American life lay not so much in “men” as in the oppressive institutions and social structures that reigned over them: “The radical reconstruction of society itself,” he said, was “the real issue to be faced” beyond superficial matters.

The fault, to paraphrase Shakespeare, is not in our stars, dear countrymen, but in us that we are underlings.

We have not transformed the institutions of power to serve the poor. They still serve the elites, not only because our government is failing, but because we also have carved a niche that serves our comforts.

We have come to accept it as a matter of fate or nature that others must suffer. As such, we fail Christ and the poor.

Are We Goats or Sheep?

This is why, as I kneel in the pew, I am haunted by the Gospel of Matthew 25: “When the Son of man comes in his glory, escorted by all the angels, then he will take his seat on his throne of glory. All nations will be assembled before him and he will separate people one from another as the shepherd separates sheep from goats.

“He will place the sheep on his right hand and the goats on his left. Then the King will say to those on his right hand, ‘Come, you whom my Father has blessed, take as your heritage the kingdom prepared for you since the foundation of the world. For I was hungry and you gave me food, I was thirsty and you gave me drink, I was a stranger and you made me welcome, lacking clothes and you clothed me, sick and you visited me, in prison and you came to see me.’

“And the King will answer, ‘In truth I tell you, in so far as you did this to one of the least of these brothers of mine, you did it to me.’

“Then it will be their turn to ask, ‘Lord, when did we see you hungry or thirsty, a stranger or lacking clothes, sick or in prison, and did not come to your help?’