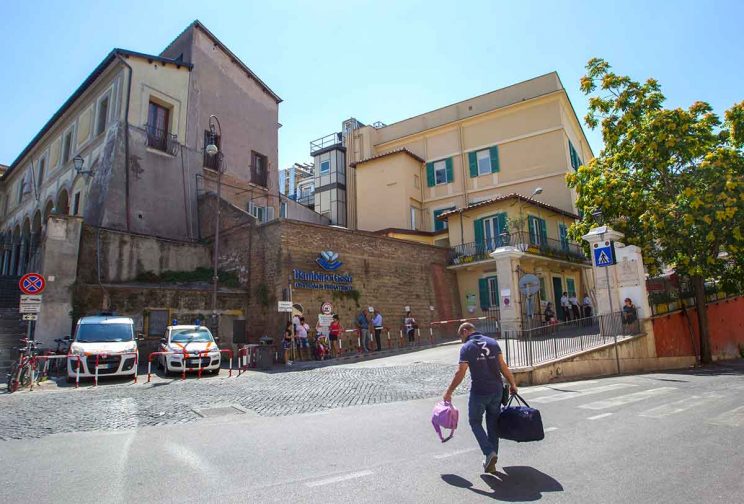 Bambino Gesu hospital in Rome is seen July 19. Two former top Vatican officials from the hospital appeared before a Vatican court for a pretrial hearing on allegations of embezzlement July 18. (CNS Photo/Robert Duncan)

Two former top Vatican hospital officials appeared before a Vatican court for a pretrial hearing on allegations of embezzlement.

Giuseppe Profiti, who was president of Bambino Gesu hospital from 2008 to 2015, and Massimo Spina, the former treasurer, appeared with their lawyers before Vatican magistrates July 18 in a nearly two-hour preliminary hearing, led by the presiding Vatican judge, Paolo Papanti-Pelletier.

A court clerk read the charges, which the Vatican had made public July 13: Profiti, 55, and Spina, 57, were accused of an illicit appropriation and use of funds belonging to the Bambino Gesu Foundation to pay Gianantonio Bandera, an Italian contractor, to refurbish an apartment belonging to Vatican City State. The apartment was used as the residence of Cardinal Tarcisio Bertone, former Vatican secretary of state.

The indictment said Profiti and Spina extracted more than 420,000 euros for “completely non-institutional ends” by using the money to refurbish Vatican property in order “to benefit Gianantonio Bandera’s company.” It said the alleged crime was committed in Vatican City State and spanned from November 2013 to May 28, 2014 — the time period that the contractor’s seven invoices were dated and paid for, according to news reports.

Lawyers for the defendants made their pretrial motions, beginning with Antonello Blasi, Profiti’s attorney.

He asked that Vatican-accredited journalists not be present in the courtroom to “avoid eventual disturbances,” according to the pool report. Journalists had made “signs of approval and disapproval” during other Vatican trials, Blasi said, and he asked the court to make a livestream of the trial available to reporters in another room.

Alfredo Ottaviani, Spina’s lawyer, agreed, suggesting that he and his client felt “a bit pressured” with reporters looking on from behind.

The Vatican prosecutor, Gian Piero Milano, dismissed the motion, saying an exception would only be made in extreme cases regarding “morals or public order.” In a case like this one, he said according to the pool report, having journalists be present was “necessary” and in the “public interest.”

The defence lawyers then challenged the Vatican tribunal’s jurisdiction, saying that even though the hospital foundation has extraterritorial status as Vatican property, its address is in Italy, not inside Vatican City State proper. They also said the presumed crime occurred in the United Kingdom where the payments ended up, destined for an Italian contractor. Ottaviani also said that while the foundation is a Vatican entity, the presumed crime was attributed to subjects or persons “outside the Vatican.”

Vatican co-prosecutor Roberto Zannotti dismissed the arguments and reaffirmed that newly expanded Vatican laws approved of in 2013 very clearly define who is considered a Vatican “public official” and that there was “not the slightest doubt” that the alleged crime occurred while Profiti and Spina were acting as public officials, so Vatican laws applied to them.

Zannotti added that the funds were extracted from the Vatican’s procurement agency, the Administration of the Patrimony of the Holy See; the allegation of misappropriation centres on from where the funds are taken – a Vatican account – and not where those funds eventually ended up, the Vatican prosecutor said.

After the preliminary hearing, prosecutors opened the floor to other arguments presented by the defence lawyers.

Among the arguments, Blasi requested the court hear witnesses all the same day in order to avoid “contamination,” implying public knowledge of a witness’s testimony might affect other witnesses’ accounts later.

Ottaviani argued that his client, even though he was treasurer of the foundation, had no power or authority to transfer assets, adding that a letter written by Cardinal Bertone had been submitted to the court to prove Spina’s lack of authority. The lawyer then said if the letter were not enough proof, he would like to call the cardinal as a witness.

The presiding judge, Papanti-Pelletier, said the court would make its decision on the requests at a later date and set Sept. 7-9 for a new round of hearings.

If found guilty, Profiti and Spina can face between three and five years in prison and fines starting at 5,000 euros.

According to letters released by investigative news reports, Profiti wrote Cardinal Bertone in late 2013, allegedly offering to pay for remodeling his residence using the foundation money in exchange for being able to use the top floor of the residence for work-related gatherings.

In a letter of reply the next day, the cardinal allegedly accepted the proposal, adding that he would make sure the costs were taken care of by a “third party” so that the foundation would not have to pay. However, the cardinal later said he paid the Vatican, which owns the apartment, 300,000 euros with his own money to cover the costs and had been unaware the foundation had already paid the contractor.

Mariella Enoc, current hospital president, told reporters in late 2015, “Cardinal Bertone never directly received money (from the hospital’s foundation), but recognised that we suffered a loss and, therefore, assisted us with a donation of 150,000 euros.”

Giuseppe Dalla Torre, president of the tribunal of Vatican City State, was not part of the trial proceedings because he is a member of the Bambino Gesu hospital’s board of directors. By Carol Glatz Catholic News Service