What Would Jesus Really Do? 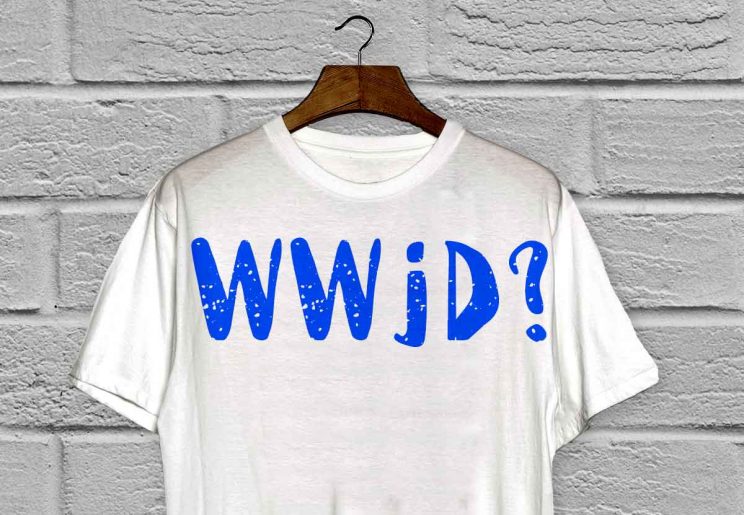 There are a few moments in the life of the parish priest when his quiet, comfortable day is disturbed so thoroughly that it ruins not only the day but also the whole week and possibly his whole pastoral outlook.

Sometimes this is a necessary and good disturbance — it drives a change, a rethink, gives a chance to reassess. Other times this means that it’s a purely gratuitous scuppering of your efforts.

One of those latter-type moments is when people — generally very sincere people — deploy the cliché: “What would Jesus do?”

It usually happens when someone is not happy with the way things are being done and organised in the parish. The quickest ad hominem argument is to ask: “What would Jesus do?”

The venerable WWJD movement of the 1990s, with those wristbands, was a way of reminding people of their living relationship with the Lord. It was a daily challenge, through a great slogan, to ask people to know the mind of our Lord and to act from that knowledge.

But it quickly became a hold-all for the caftan-wearing, circle-dancing folk music lovers who have never grown out of their 1968 experience (as Pope Benedict XVI characterised them). It becomes a way of saying not what Jesus would ask us to do, but a way of making Jesus do what I want.

There are those who have privatised the person of Our Lord into their own self-image and canonised that self-image into a process that ultimately makes our Lord into just another nice prophet-type guy, all cool and groovy. This is a betrayal of the real person of Jesus.

A powerful and necessary slogan has become a brown paper bag over the chemo-poisonous chemicals of a lethal injection.

As you can sense, I don’t like what the slogan has become.

One of the immense beauties of the post-1968 liturgy is the rediscovery of the dynamism of sacred Scripture. With the three-year Sunday lectionary cycle and the two-year weekday cycle, Catholics and the other users of the Revised Common Lectionary have daily and huge doses of Scripture. While not everything is covered in the Bible, we certainly cover almost all the Gospels and the New Testament writing and a very healthy majority of the Old Testament.

The Real Jesus is in the Gospels

I  have spent the last ten years participating in at least two Bible studies a week. One of the amazing spiritual personal benefits I receive from this is that I have deeply discovered, and continue to discover, the personality of Jesus in the Gospels.

Gone is a child-like naivety of Jesus and the Lambs. I’ve discovered a really powerful appealing person who points us to the Father in love — and also with a very strong sense of justice and purpose.

[Tweet “I’ve discovered a really powerful appealing person who points us to the Father in love .”]

The picture of Jesus in the Gospel of John, for instance, has him saying fearlessly harsh things. The “eat my flesh and drink my blood” sayings of John 6 are not pretty symbolic gestures but horrifically and profoundly disturbing encounters with a nice guy who at that point is not all cool and groovy. The effect was that many left him and no longer pilgrimaged in his way.

The effect of the cleansing of the Temple was not just that Jesus threw over a few tables and chased a few pigeons. It was a profound attack on an entire system of both ritual appeasement and collaboration. One has only to imagine the chaos that erupted with Passover animals running wild and panicked in the streets of Jerusalem (whose population swelled by between three and ten times for the high holy days).

This is no gentle Jesus meek-and-mild. There’s no more Mr Nice Guy here—if you are serious about Scripture and the history of how it has been interpreted in the Church.

I’m sure the WWJD squad will be up in arms and force me under pain of another verse of “Kumbaya” to admit that all I’m looking for is a justification of an outdated authoritarian discipline that doesn’t gel with their particular version of “Let’s just love one another”; that I just want to impose my way on unwilling sheep.

Remember it’s “love God and your neighbour”. And as our Lord said to Phillip: “Have I been with you this long and still you are dancing around a beeswax candle in a pure cotton tie-dyed caftan…”

I know a woman married to a deacon. Sadly, she is in poor health and worries that if she dies,...