Pope Prays for Sierra Leone: The Needs are Overwhelming 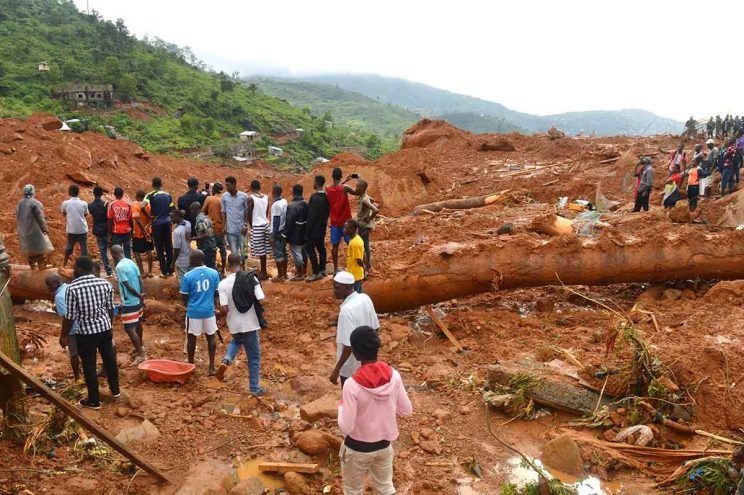 Pope Francis offered his condolences and his prayers to the people of Sierra Leone after flooding and a major mudslide led to the deaths of hundreds of people and displaced thousands.

“Deeply saddened by the devastating consequences of the mudslide on the outskirts of Freetown, His Holiness Pope Francis assures his closeness to those who have lost loved ones at this difficult time,” said a message sent to Archbishop Edward Tamba Charles of Freetown by Cardinal Pietro Parolin, Vatican secretary of state.

Pope Francis “prays for all who have died, and upon their grieving families and friends he invokes the divine blessings of strength and consolation,” said the message, which was released by the Vatican. The pope also “expresses his prayerful solidarity with the rescue workers and all involved in providing the much-needed relief and support to the victims of this disaster.”

Ishmeal Alfred Charles, who is managing Caritas’ emergency response, told Catholic News Service: “There is so much agony and pain here.”

“The burials start today,” he said, noting that he was on his way to a mortuary to help people identify the bodies of their loved ones.

Caritas’ emergency team of 10 medics and about 30 voluntary helpers “needs more resources,” Charles said. “We have exhausted all that we have, and the needs are overwhelming.”

Caritas Responds to the Tragedy

The team got to the scene of the mudslide early Aug. 15 and “in the first 10 minutes we were there, 11 corpses,” including six children, were brought into the tent they had set up to register victims, he said.

One of the survivors is a 16-year-old girl “who had been at a friend’s house watching movies when she called her mother to ask if she could stay over because it was getting late,” Charles said.

“Her mother agreed on the condition that she return home early the next morning. When she woke up and walked home, there was nothing there,” he said. “She is her family’s only survivor.”

Visiting the hard-hit town of Regent, about 15 miles east of Freetown, President Ernest Bai Koroma described the devastation as “overwhelming” and pleaded for international assistance.

Soon after the disaster struck, Catholic Relief Services, the overseas aid agency of the U.S. Conference of Catholic Bishops, published an appeal to donors.

An Appeal for Donations

“More than 300 people were killed and property was destroyed” in the mudslide, CRS said. At least 100 homes were covered and more than 600 people were still missing early Aug. 16.

“The death toll is expected to rise,” the CRS appeal said. “Families affected by the Sierra Leone landslide need food, shelter, water and clothing,” which CRS and its partner Caritas will strive to provide.

Idalia Amaya, CRS’ deputy head of programs and the emergency response coordinator, said: “The devastation is like nothing we’ve seen before. Entire neighborhoods have been washed away … People are in a complete state of shock.”

CRS said in addition to providing food, water and mattresses to those immediately affected by the disaster, it would support the government and religious leaders with dignified burials of those who perished. The agency said its staffers were drawing from the experience of CRS’ Ebola response in 2014.

They have ‘already been through so much’

“People here have already experienced so much trauma having lived through war and then Ebola, and now this,” Amaya said. “But at the same time, people from Sierra Leone are incredibly resilient, and I know that with the proper support they will overcome this latest tragedy.”

CAFOD, the official aid agency of the bishops of England and Wales, said heavy rainfall was expected to continue, and conditions may deteriorate.

In Freetown, Kayode Akintola, CAFOD’s country representative for Sierra Leone, said: “Things are really bad on the ground. Just a few minutes’ walk from our office a bridge has been submerged. There are dead bodies in the water and littering some of the streets, and houses are still under water.”