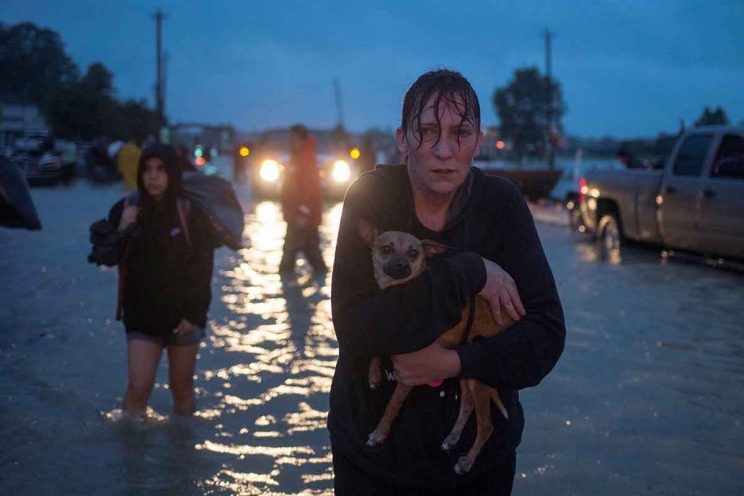 A woman holds her dog as she arrives at high ground after evacuating from her home because of floods caused by Tropical Storm Harvey in Houston. (CNS photo/Adrees Latif, Reuters)

After leading thousands of pilgrims in praying the Angelus, Pope Francis offered prayers for flood victims in Texas and Louisiana and in Nepal, India and Bangladesh. 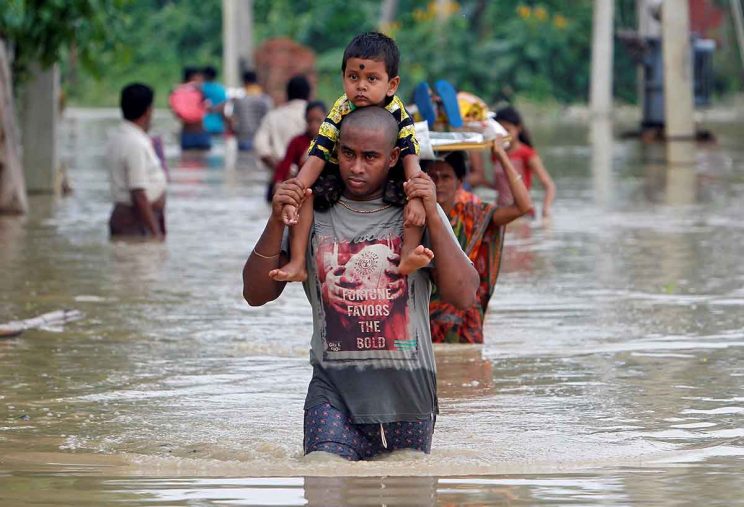 “While I renew my spiritual closeness to the people of southern Asia, who still suffer the consequences of the floods, I want to express my heartfelt participation in the sufferings of the inhabitants of Texas and Louisiana struck by a hurricane and by exceptional rains that have caused victims, thousands of displaced and considerable material damage,” the pope said.

Hundreds of thousands were displaced in Texas and Louisiana after Hurricane Harvey made landfall. In the same week, floods and landslides in southern Asia killed more than 1,000 people and affected an estimated 41 million people, the United Nations reported. 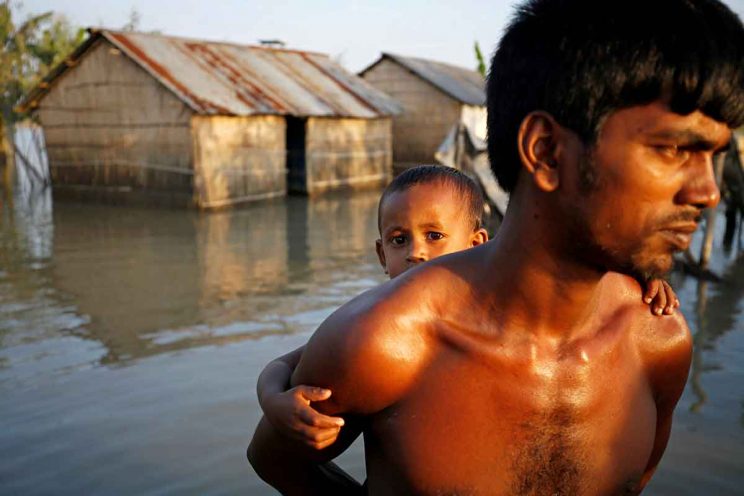 A father carries his child on back as they make their way in a flooded area in Bogra, Bangladesh. (CNS photo/Mohammad Ponir Hossain, Reuters)

Invoking the intercession of Mary, “consoler of the afflicted,” the pope prayed that she would “obtain from the Lord the grace of comfort for our brothers and sisters” affected by the floods.

In his address before reciting the Angelus prayer, Pope Francis reflected on the Sunday Gospel reading from St. Matthew in which Jesus rebukes Peter for opposing his death on the cross.

“Get behind me, Satan! You are an obstacle to me. You are thinking not as God does, but as human beings do,” Jesus said to Peter.

Peter, the pope explained, turned from the rock upon which Christ wanted to build his church to “a stumbling block on the path of the Messiah.”

Christians today face the same temptation of “wanting to follow Christ without the cross, or even of wanting to teach God the right path.”

“Jesus reminds us that his way is the way of love and there is no true love without self-sacrifice,” the pope said. “We are called to not allow ourselves to be absorbed by the vision of this world but to always be more aware of the need and effort for us Christians to walk uphill and against the current.”

The wisdom of Jesus’ call to gain life by losing it, the pope continued, challenges the “egocentric mentality and behaviours that lead men and women to a “sad and sterile existence” that comes from only protecting and fulfilling themselves.

“May Mary Most Holy, who followed Jesus to Calvary, accompany us also and help us not to be afraid of the cross,” he said. May all accept “the cross of suffering for love of God and of our brothers and sisters because this suffering, by the grace of Christ, is fruitful with the resurrection.” By Junno Arocho Esteves Catholic News Service