Ok, What’s Going On With Medjugorje? 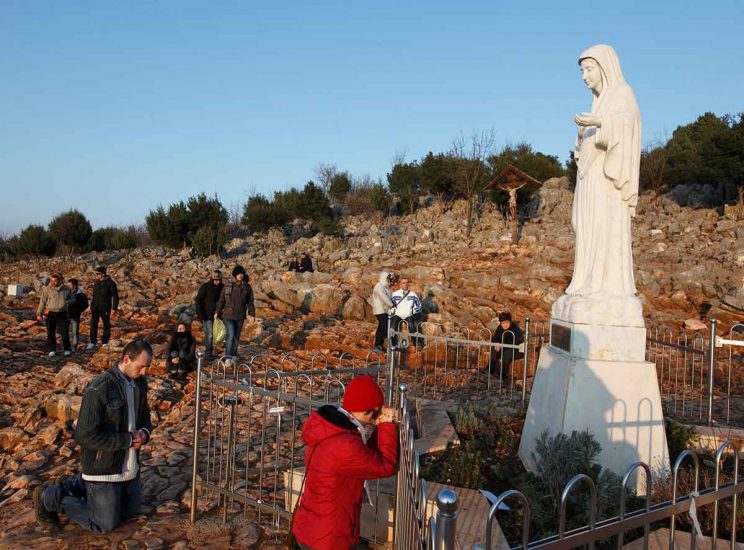 Pilgrims pray in front of a statue of Mary on Apparition Hill in Medjugorje, Bosnia-Herzegovina.

John Lee, Johannesburg – The alleged apparition of Our Lady at Medjugorje in 1981 continues to be controversial. This is after 36 years.

The site is one of the most famous and most-visited apparition sites in history, along with Lourdes, Guadeloupe, Fatima and others. However, there are shadows in the picture. Bishop Pavao Zanic of Mostar has waged a steady campaign to discredit this series of apparitions to the (originally) six child visionaries.

Bishop of Mostar Doubted the Apparitions from the Beginning

Bishop Pavao Zanic of Mostar has waged a steady campaign to discredit this series of apparitions to the (originally) six child visionaries.

Not only did the bishop of Mostar not believe in them, he became their most bitter and zealous opponent. Ironically, in the beginning, Bishop Zanic had been a strong advocate of the apparitions. Yet later he would deem the apparitions a hoax, perpetuated by the Franciscans.

Bishop Zanic was not a Franciscan, and therein, perhaps, lay the root of his opposition. As the newly appointed bishop of Mostar in 1980, he immediately started shifting parishes in his diocese from Franciscan to secular authority (under no particular order).

In January 1982, a commission was set up for the Church to make a final ruling on the apparitions. As it turned out, it did little. Two years later a new commission was established.

The bishop, however, appointed himself commission president, declaring: “I am the commission,” adding that he “would crush the apparitions”.

Bishop Zanic’s successor, Bishop Ratko Peric, also considers the apparitions false, referring to them as “religious shows”. We can only hope and pray that soon the protracted controversy surrounding Medjugorje will be resolved by the intercession of our Blessed Mother Mary herself.