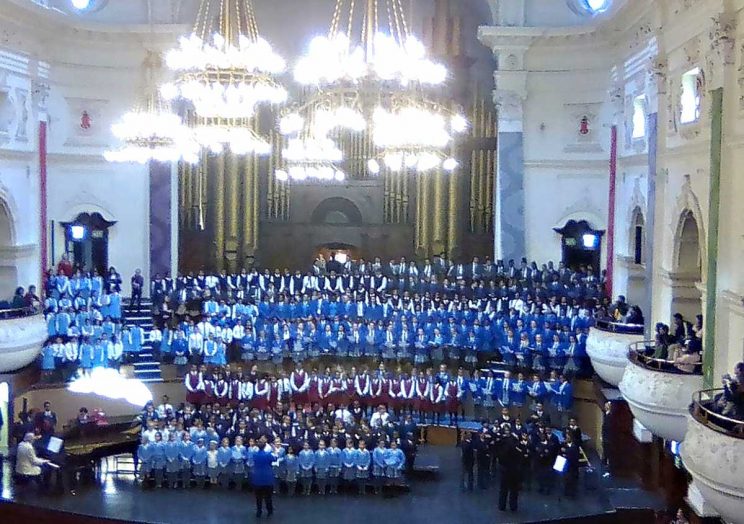 As part of the Church’s bicentennial year, a Catholic schools choir festival was held at the Cape Town City Hall. The highlight was a massed choir of 400 which performed a medley of Disney movie songs. Bicentennial projects involving the youth are underway as part of the year-long celebration of the Southern African Church’s 200th anniversary in 2018.

A number of parishes, clergy and religious also joined the school communities for an afternoon of entertainment.

Archbishop Stephen Brislin delivered a bicentennial address in which he lauded the founders of Catholic schools for their selfless contribution to building the Church over the past 200 years. The highlight of the afternoon was the massed choir of 400 children delivering a medley of Disney movie songs. This was conducted by Alison Dunn, accompanied by Adolf Thelen and Andrew Bentley.

The Catholic Schools Office, in collaboration with the archdiocese’s Catechetical Department, has also launched the Bicentennial Heritage Project, in which participants are invited to share their story.

Parishes and Catholic schools will invite the youth to participate. To enter, participants must research the history of their school or founding mother/father, or tell the story of someone who has played a special role in their school.

The project may be embarked on as an individual or a group, and the entries will be judged under the categories of group, individual, juniors (foundation phase), intermediates, seniors, and further education and training.

All entrants and participating schools will receive a certificate of participation signed by Archbishop Brislin.

The best three entries in each category will be invited to an awards ceremony at which the archbishop will preside, and will receive a cash voucher/book prize. The closing date for entries is Monday, October 16, 2017. Submit by e-mail to the Catholic Schools Office at admin.cso@telkomsa.net

Bishops condemn selling of Nigerians into slavery in Libya
Share