How Can I Love and Serve the Lord? 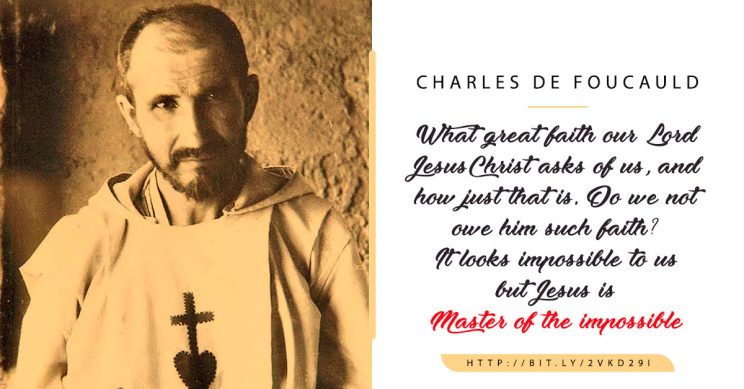 I try to follow Christ and his teachings as a Catholic. At the end of Mass, I am advised to go in peace to love and serve the Lord. I see others loving and serving the Lord in doing parish jobs, joining societies and assisting their neighbour. I have always been too shy to do such things. How can I love and serve the Lord, apart from praying and receiving the sacraments? Ann

In some ways, your desire to serve Christ without involving yourself too socially with others, is similar to that of a very holy man you may have heard of.

He is Bl Charles de Foucauld (1858-1916), a Frenchman who experienced a remarkable conversion from living a wild early life to submitting himself totally to the service of Christ in a very special way.

The Life of Charles de Foucauld

He became a Trappist monk and lived the religious life for seven years. But he was not content. He had an ardent love for his Lord,  and so moved to the Holy Land and settled in Nazareth, the town where Jesus was brought up. There he lived as a hermit.

His presence in the very place where the Holy Family had lived stirred his imagination deeply. As he moved around the little town, he wondered what Jesus might have been doing as a boy and young man during his “hidden life”, which the gospels disappointingly neglect to tell us.

The Humble Life of Jesus

Charles understood that what the Holy Family did was nothing more than to live an ordinary life among neighbours. The thought that Jesus was obeying God the Father’s will in dwelling for 30 years in an obscure little town, doing mundane tasks and chores, filled him with awe. If God should will such apparent insignificance for his Son, then there must be a purpose in it, he reasoned.

He decided to build his spiritual life in imitation of the humble life of Jesus. He wanted only to live as God lived on earth, not depending on worldly possessions, happy with his circumstances and doing daily tasks as acts of service and love for God the Father and neighbour.

Moved to Algeria – Yearned to be an example

Later, he moved to Algeria, which was then under French occupation. He intended to reside where there were few people, to demonstrate that a simple kind of “hidden life” could be discerned by them as a truly Christian life, unlike the bad impression the local Muslims got from the officious French colonists.

He yearned to be an example so that others would say: “If the servant lives like this, what must his Master be like?”

He is remembered for this courageous consistency and for his martyrdom during political unrest — he was shot dead by raiding tribesmen in 1916, aged 58.

I mention this much of Bl Charles’ inspiring life to encourage you to love and serve the Lord by following his example and live a “hidden life” for love of Christ and neighbour.

Must We Give Beggars Money?

Scruples in Temptations: Did I Sin?