Mary: A Courageous Woman Up to the End 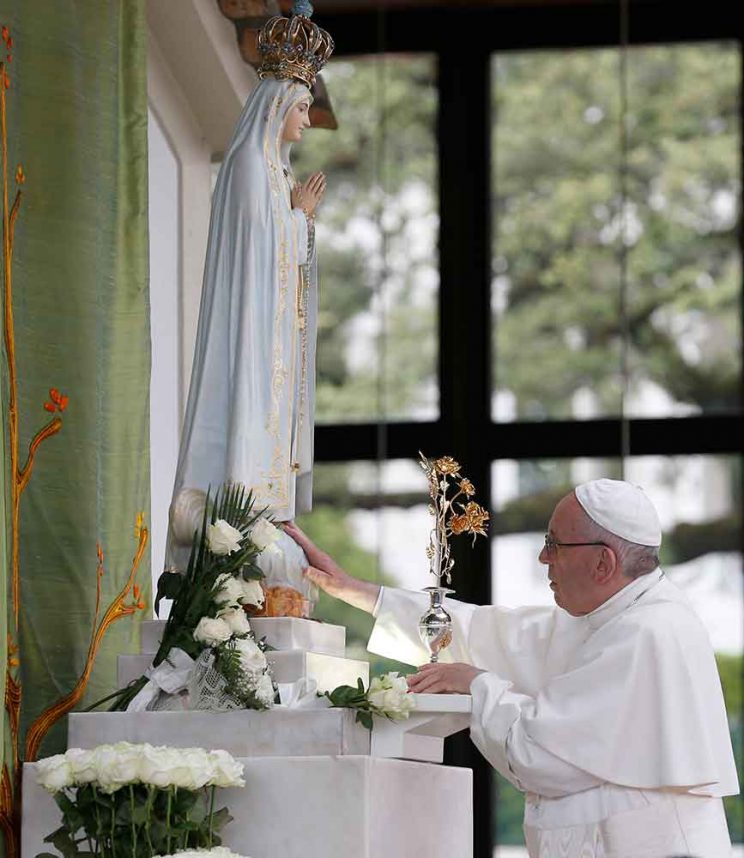 Pope Francis places flowers near a statue of Mary as he prays in the Little Chapel of the Apparitions in early May at the Shrine of Our Lady of Fatima in Portugal. Mary was a courageous woman who stood by Jesus even when the crowds turned against him, and even though she knew he would face a tragic death, Pope Francis said. (CNS photo/Paul Haring)

Mary was a courageous woman who stood by Jesus even when the crowds turned against him and even though she knew he would face a tragic death, Pope Francis said.

“At the very end, she is there, standing, looking at her son” on the cross. “Maybe she heard comments: ‘Look, there is the mother of one of the three delinquents.’ But she remains. Silent. She is the mother, she does not deny her son,” the pope said in his homily during a morning Mass in the chapel of the Domus Sanctae Marthae.

Our Lady of Sorrows

Commemorating the feast of Our Lady of Sorrows, the pope reflected on the day’s Gospel reading from St. John which recounted Jesus’ final moments on the cross.

Mary, the pope said, had heard Simeon’s prophecy that a sword would pierce her heart and knew that her son would one day give his life for humanity.

Yet she followed Jesus the whole time, which is why “we say that Mary is the first disciple,” the pope said.

Pope Francis told those gathered in the chapel with him that the scene of Mary at the foot of the cross is something to be contemplated in silence rather than explained.

From the cross, “‘woman,’ – her son says – ‘behold your children.’ He doesn’t say ‘mother,’ he says ‘woman,'” the pope said. “A strong, courageous woman; a woman who was there to say, ‘This is my son: I do not deny him.'” By Junno Arocho Esteves Catholic News Service

Mary the Mother of Hope

Mary is a Mother to Sinners, Not the Corrupt

Hush hour: Spirituality of Silence is a Journey Toward God
Share