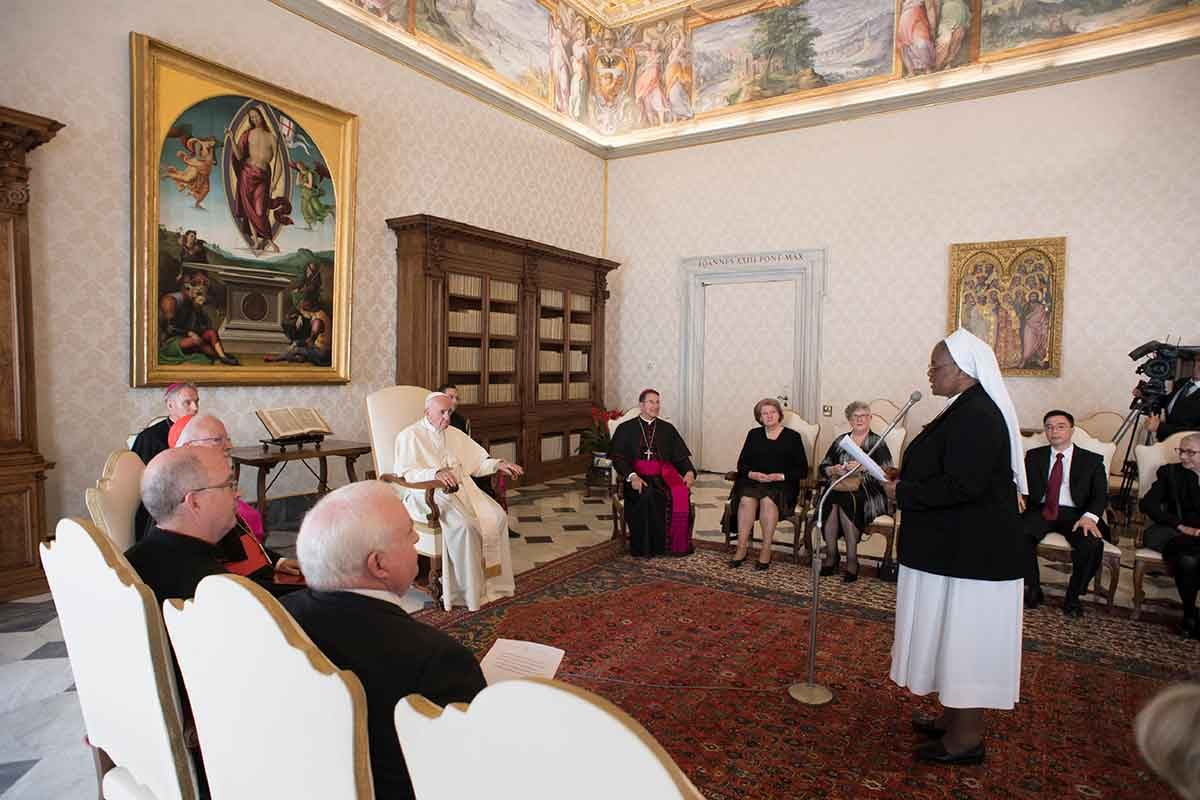 Pope Francis listens as Sister Hermenegild Makoro, a member of the Pontifical Commission for the Protection of Minors, speaks during an audience with commission members at the Vatican. The pope told commission members that the church was late fighting abuse, and he promised a policy of zero tolerance for abusers. (CNS photo/L’Osservatore Romano, handout)

Pope Francis has endorsed an approach of “zero tolerance” toward all members of the church guilty of sexually abusing minors or vulnerable adults. The pope said he has decided whoever has been proven guilty of abuse has no right to an appeal, and he will never grant a papal pardon – meaning that the offending priest or bishop will be laicised or similar.

“Why? Simply because the person who does this (sexually abuses minors) is sick. It is a sickness,” he told his advisory commission on child protection during an audience at the Vatican. Members of the Pontifical Commission for the Protection of Minors, including its president – Cardinal Sean O’Malley of Boston – were meeting in Rome for their plenary assembly.

Setting aside his prepared text, the pope said he wanted to speak more informally to the members, who include lay and religious experts in the fields of psychology, sociology, theology and law in relation to abuse and protection.

The Catholic Church has been “late” in facing and, therefore, properly addressing the sin of sexual abuse by its members, the pope said, and the commission, which he established in 2014, has had to “swim against the tide” because of a lack of awareness or understanding of the seriousness of the problem.

“When consciousness comes late, the means for resolving the problem comes late,” he said. “I am aware of this difficulty. But it is the reality: We have arrived late.”

“Perhaps,” he said, “the old practice of moving people” from one place to another and not fully facing the problem “lulled consciences to sleep.”

Prophets of the Church Point to Difficult Problems

But, he said, “prophets in the church,” including Cardinal O’Malley, have, with the help of God, come forward to shine light on the problem of abuse and to urge the church to face it.

Typically when the church has had to deal with new or newly emerging problems, it has turned to the Congregation for the Doctrine of the Faith to address the issue, he said. And then, only when the problem has been dealt with adequately does the process for dealing with future cases get handed over to another dicastery, he added.

Because the problem of cases and allegations of abuse are “grave” – and because it also is grave that some have not adequately taken stock of the problem – it is important the doctrinal congregation continue to handle the cases, rather than turning them over directly to Vatican tribunals, as some have suggested.

However, he said, the doctrinal congregation will need more personnel to work on cases of abuse in order to expedite the “many cases that do not proceed” with the backlog.

Pope Francis told commission members he wants to better balance the membership of the doctrinal team dealing with appeals filed by clergy accused of abuse. He said the majority of members are canon lawyers, and he would like to balance out their more legalistic approach with more members who are diocesan bishops and have had to deal with abuse in their diocese.

Pope Made a Bad Decision in the Past

He also said proof that an ordained minister has abused a minor “is sufficient (reason) to receive no recourse” for an appeal. “If there is proof. End of story,” the pope said; the sentence “is definitive.”

And, he added, he has never and would never grant a papal pardon to a proven perpetrator.

The reasoning has nothing to do with being mean-spirited, but because an abuser is sick and is suffering from “a sickness.”

The pope told the commission he has been learning “on the job” better ways to handle priests found guilty of abuse, and he recounted a decision he has now come to regret: that of agreeing to a more lenient sanction against an Italian priest, rather than laicising him as the doctrinal team recommended.

Two years later, the priest abused again, and Pope Francis said he has since learned “it’s a terrible sickness” that requires a different approach.