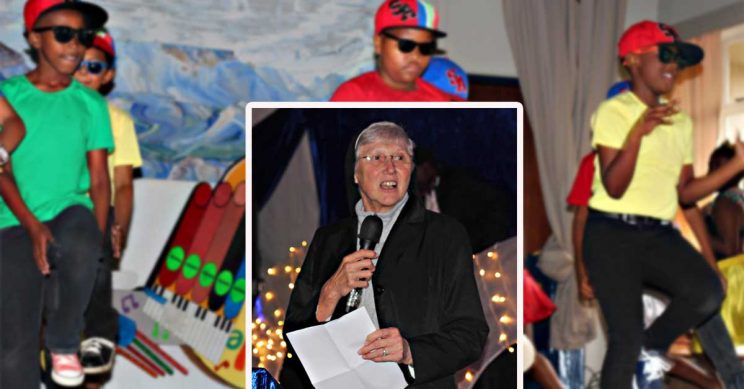 Sydney Duval – The Nardini Convent School at Vryheid, which began with five pupils in 1957 amid Roomse gevaar hostility, has celebrated its 60th anniversary with an enrolment of some 450 pupils and a reputation for excellent education and academic achievement.

The Franciscan Nardini community joined staff, parents, pupils, past pupils and friends to celebrate the milestone with Cardinal Wilfrid Napier of Durban at a jubilee thanksgiving Mass in St Thomas More church, Vryheid.

This was followed by “a walk down memory lane” at the school, a rousing, colourful concert by pupils, and a gala dinner dance with prizes.

Sr Dolorosa Sorour Gives Thanks for the Nardini Sisters

In her welcome at the beginning of Mass, Vryheid convent superior Sr Dolorosa Sorour said: “We pay tribute to the brave Nardini Sisters who heard and listened to God’s call to leave homes and families to be missionaries in South Africa.”

Sr Dolorosa described the Nardini sisters as “instruments on which the Lord has played his beautiful music for the past 60 years”. She added her thanks to priests of the parish who had served as chaplains to the school through all the years.

Cardinal Napier in his homily explored the school as an ongoing work in progress and shared his experiences of three popes and their concerns for Church and society.

Cardinal Napier on the 3 Popes

The cardinal recalled Pope John Paul II as having a wonderful vision for the things God wanted for the world: “Remember the past with gratitude, but also live the present with action…to be open to the future with confidence.”

He experienced Pope Benedict XVI as the pastor who, seeing everything seeming to fall apart, went to work for reconciliation and peace, inspired by St Benedict who reformed and rebuilt the Church.

He valued Pope Francis as a pastor reaching out to people in their particular situations — like the two disciples walking away from Jerusalem to Emmaus, and Jesus, instead of forcing them back to Jerusalem going along with them and sharing a meal.

“To walk with Jesus means to bring him into our families, to break bread with him,” he said.

At the gala dinner former pupil Malibongwe Masombuka, now principal of the Oprah Winfrey-sponsored Harpo Primary School in Lakeside Park, Vryheid, described the Nardini impact on her life under Sr Isentraud Rauscher who had admitted her and her brother to the school on their return from exile in Swaziland in 1983. They had not wanted to attend any school offering apartheid-style education.

A teacher with a long association with the school going back to 1979, Cherith Summerfield, thanked the Nardinis for not only giving her own children an education for life, but for also showing her compassionate support in a time of distress.

Paula Friend, a long-serving member of the PTA, said the Nardinis over 60 years “have been a constant, permanent presence here and their unity of vision has touched everything they have done and will continue to do in the years ahead. Close to my heart is the strong Christian ethos of the school, and the daily scripture lessons which gave pupils a grounding for life.”

Nardini regional superior Sr Ellen Lindner recalled that it all started with Bishop Aurelian Bilgeri of Eshowe, a Benedictine who had grown up in a Nardini children’s home in Germany.

“Like a visionary composer he carried in his heart a melody which kept him awake at night. So he put some chords to paper and tried his tune at the Nardini motherhouse in Germany. He invited sisters to join him in finetuning the melody in his heart which needed to be set free,” Sr Ellen said.

“Initially, his proposal was not successful, but his tenacity paid off and in January 1955 the first four Nardini Sisters arrived in South Africa, followed by another four in November. By 1957, an enthusiastic quartet of Sisters was so tuned in with the bishop that they were ready to commence the Nardini Convent School in Vryheid. That was 60 years ago. Since then the quartet has expanded into a sizeable orchestra,” she said.

Adding Melodies to The Nardini Song

Noting the school’s principals over the years — Sr Modoalda Stigler, Sr Isentraud Rauscher, Sr Catherine Brucker and now Sr Mpume Nhleko — she continued on her musical theme: “In which section of the orchestra were you playing? With the violins, violas, flutes, clarinets, French horns, the murmuring harps, or the clashing cymbals, the drums, trumpets, trombones, bassoons, oboes?”

“Each one of you has added to the melody of the Nardini song. Your creativity brought in new sounds, new rhythms, new chords.”

“Bishop Bilgeri’s melody has been carried far beyond Vryheid. His harmonious music was even offered to a world often drowning in overpowering sounds and noises. May the Nardini song, alive in you, offer a counterbalance to what is not song, melody or harmony.”

A Brief History of religious Orders in South Africa