‘Iron Nun’ Would Love to Run in South Africa 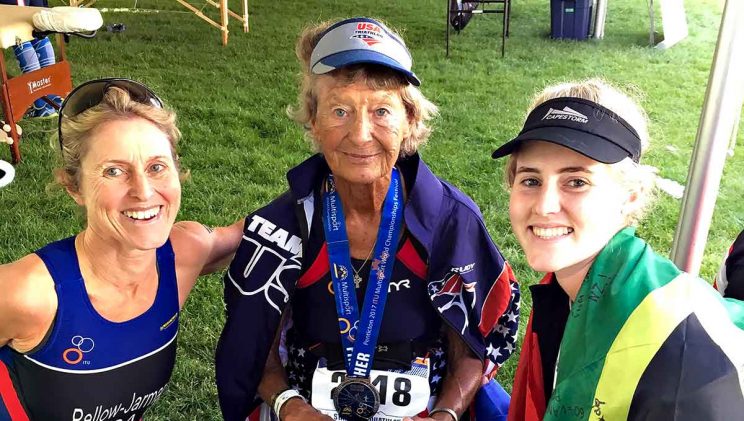 The legendary “Iron Nun” was amazed at learning that she had featured in Southern Africa’s regional Catholic newspaper and expressed her hope to visit South Africa.

Sr Madonna Buder at 87 takes part in Iron Man events, and has completed more than 340 triathlons. She last featured in The Southern Cross in August 2016 in a report on her starring role in a sportswear advertising campaign.

“We were lucky enough to meet Sr Madonna after she finished and have a chat to her,” Mrs Pellow-Jarman said. “She is an incredibly unassuming, humble woman. She was quite amazed when I told her that I had read about her in The Southern Cross in South Africa. She expressed her wish to visit South Africa, and was very interested to know about the Iron Man events in the country.”

Sr Buder started her extreme sports career at the age of 48, at the suggestion of a priest. She completed her first triathlon at age 52 and first Ironman event at 55.  She became the overall Ironman world record holder for the oldest person to complete the event in 2012, at the age of 82.

After taking part in the duathlon in Canada, she told a local newspaper, the Penticton Western News: “I thought I was the last one to finish, some friends assured me I wasn’t — but I’m not convinced.”

Sr Buder gives inspirational talks to groups, has written a book called The Grace to Race, makes TV appearances to talk about age and health — and even saved her neighbour from a house fire.