Following in the Footsteps: The Denis Hurley Pilgrimage 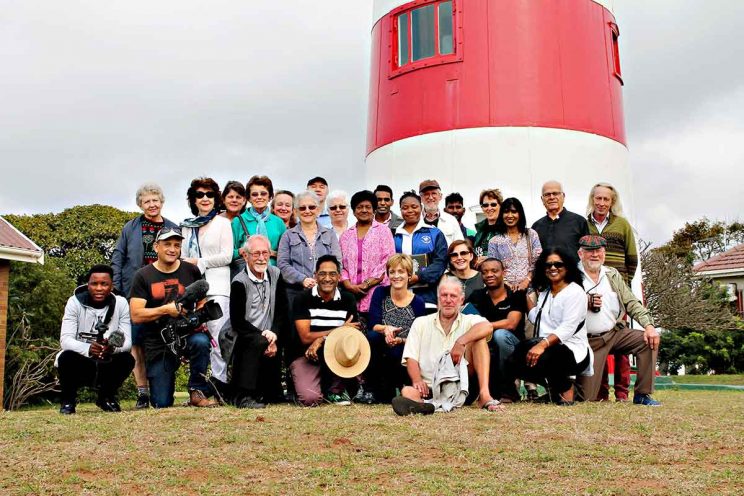 Participants in the pilgrimage to sites in KwaZulu-Natal associated with Archbishop Denis Hurley at Clansthal lighthouse, where the late archbishop’s father was the keeper. Raymond Perrier writes that it is good and profound “to make a pilgrimage to places associated with someone who has died”. (All photos: Illa Thompson)

We have a strong Catholic tradition of pilgrimage, visiting places which we regard as especially sacred; what the Irish call the “thin places” where heaven and earth seem to touch. Many readers will have been on pilgrimages, organised or solo, to places like Ngome, Lourdes, Fatima or the Holy Land.

We can combine those two traditions in a simple and profound way with a pilgrimage to places associated with someone who has died.

Far from being maudlin or depressing, this can actually be an opportunity for celebration and joyful reminiscence, especially if we go with others who also knew the person. Travelling side by side is a great opportunity to exchange stories — as Chaucer’s pilgrims found 600 years ago in sharing their Canterbury Tales.

In the Footsteps of Archbishop Denis Hurley

I was involved in a profound experience like this a few months ago when we organised two consecutive Saturdays of driving around KwaZulu-Natal in the footsteps of Archbishop Denis Hurley, the long-time head of Durban archdiocese who died in 2004 after whom the centre I work for was named.

On each day of the Hurley pilgrimage we were a wonderfully mixed bunch of 28 people in two taxi-buses (generously lent by St Henry’s Marist College). The group included people who had worked very closely with Archbishop Hurley — his biographer Paddy Kearney, his vicar-general Mgr Paul Nadal, his secretary Julie Mathias, Coral Vinsen from the Black Sash, and Bishop Michael Nuttall, a close partner when he was Anglican bishop of Natal.

There were also family members, priests, Sisters and lay people who knew him well; people from other faith communities; and a few of us who did not know him at all but were keen to drink up the many stories.

Paddy Kearney arranged visits to 18 sites over the two days, and each one of them brought out a different aspect of Hurley’s life, and thus a different set of stories.

Of course, there were places with religious connections. Emmanuel cathedral was not only his base when he was a bishop but also the place where he worked as a newly ordained priest and many years later as a newly retired bishop. It’s where his shrine is today.

We also visited Our Lady of Fatima church in Durban North whose foundation stone Archbishop Hurley laid and where he celebrated his last Mass on the morning of his death; Holy Nativity Anglican cathedral in Pietermaritzburg, and also nearby the oldest Catholic church in KwaZulu-Natal, now a museum to the Oblates.

Here we could reminisce about Hurley the priest, the bishop, the man of prayer, the Catholic who was not afraid to engage with people of other faiths.

There were also many places with educational connections which prompted stories of his own schooling and his keen interest in the formation of children, of priests and of lay people and religious Sisters.

We were welcomed at St Joseph’s Theological Institute at Cedara, near Pietermaritzburg, and noticed that Hurley laid the foundation stone of this place the day before he received the pallium that marked him as an archbishop — a very busy weekend in August in 1951!

Cedara is the successor to the OMI Scholasticate where Fr Hurley was rector; it now houses a beautifully curated archive and library that honour him and his work.

Some of the more senior members of the group delighted in looking at the old photos and recognising themselves or people they had known.

Sadly, the school room on Robben Island where the young Denis began as a learner was a little too far for our pilgrims! But we did honour the time he spent being educated in Newcastle by the Dominicans (again, the link to Fatima in Durban North) and by the Marists at St Charles College in Pietermaritzburg. Although no longer a Catholic school, the college is proud of its connections with Hurley, and also with Paddy Kearney and his brothers. 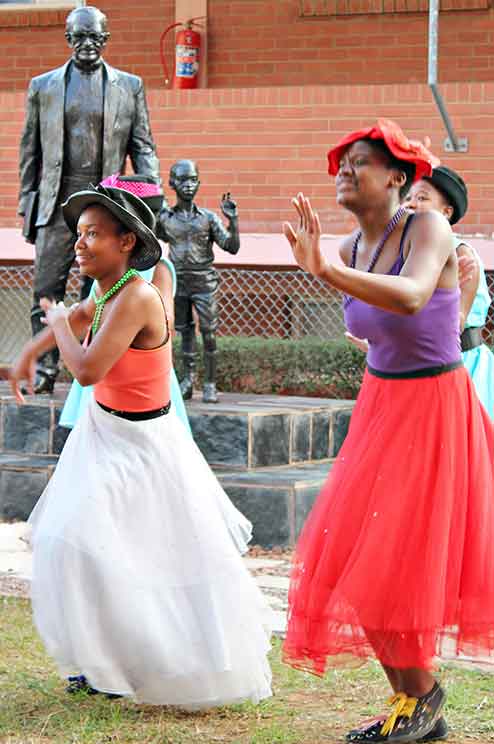 Young learners at Kwa Thintwa School for the Deaf performing for the Hurley pilgrims in front of the statue of their founder.

At the other end of his life, Hurley’s involvement with education was shown by his willingness to serve as chancellor of the University of Natal. When we visited the Scottsville campus, stories were heard of Hurley’s valuable role in guiding that institution in its transition to become UKZN.

In the middle of his life, Hurley created one his greatest educational legacies: Kwa Thintwa School for the Deaf. The 360 young people there and their educators welcomed us joyfully with song and dance. The school has an impressive record of helping young people with vocational training and also ensuring that many of them gain matric and pass on to further studies.

Hurley’s role as an activist was not to be forgotten and we had visits to Diakonia Council of Churches (which he founded with Mr Kearney), to the site by the ICC where he inaugurated the first Good Friday march to show solidarity with detainees in the old prison in 1985, and to the Alan Paton archives at UKZN (it was Paton who dubbed him “The Guardian of the Light”). 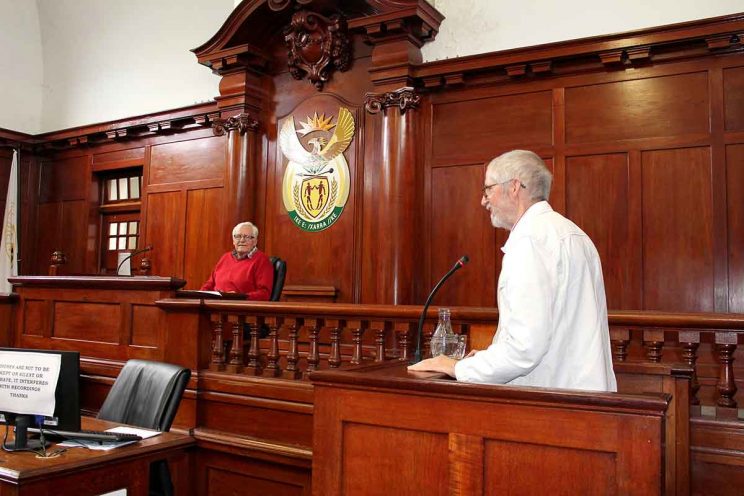 Above: Judge Chris Nicholson (left) and Paddy Kearney are reunited in the Durban High Court.

Brushes with history – Back in the Courtroom

For me this part provided two of the most interesting brushes with history.

We sat in Courtroom C in the Durban High Court and heard about the case that Hurley helped bring to challenge the right of the police to detain people without first proving they had cause.

This was especially moving because present were Mr Kearney (who in that case was the detainee in question), Chris Nicholson (the lawyer representing Hurley and now an eminent judge in the same court) and Previn Vedan (who today continues the work that Judge Nicholson started at Legal Resource Centre).

Here was a chance to remember the need then and now to be a “voice for the voiceless” — individuals and groups who need their rights defending by good lawyers and activists.

The other brush with history was a visit to the very grand Lillieshall House in Morningside, now the home of the Indian consul-general who welcomed us warmly.

For many years this was the home and the chancery of the archbishop of Durban, and it was from here that Hurley provided personal and political support to conscientious objectors and those involved in the End Conscription Campaign.

Illa Thompson and Brendan Moran were able to share their moving stories on behalf of the many who were involved.

Target of a Petrol Bomb

Here also Hurley had been the target of a petrol bomb thrown through the back door. Mgr Nadal recalled Hurley’s “disappointment” that the bottle had no longer contained whisky.

Our Hurley pilgrimage was able to include also the Clansthal lighthouse where young Denis spent his early years. Here his niece read poignantly from the diaries of Hurley’s younger brother Chris.

The pilgrimage also took us to Sabon House, the Oblate retirement home, where Hurley spent his final years. Some of the older Oblates shared their memories with us.

Of course, Hurley lived many years and did many things so there was no shortage of interesting places to visit.

But we can all celebrate the lives of people we have known — parents, siblings, friends, people who inspired us — by retracing their steps and sharing stories of what their lives meant and how their lives continue to affect us today. Let that be a new way of honouring our faithful departed this November.

November 9 marks the 103rd anniversary of Hurley’s birth. On  November 18 at 10:00 at St Joseph’s Morningside, the archdiocese of Durban’s Justice & Peace Commission will host the Annual Hurley Lecture which this year will be given by Bishop Rubin Phillip, retired Anglican bishop of Natal.

More photographs of the Hurley pilgrimage are available on facebook.com/DenisHurleyCentre. Several videos of parts of the pilgrimage can be viewed on You Tube at www.bit.ly/2h0wIAM.