50 Years a Priest: A ‘Blunt Instrument’ Thanks God 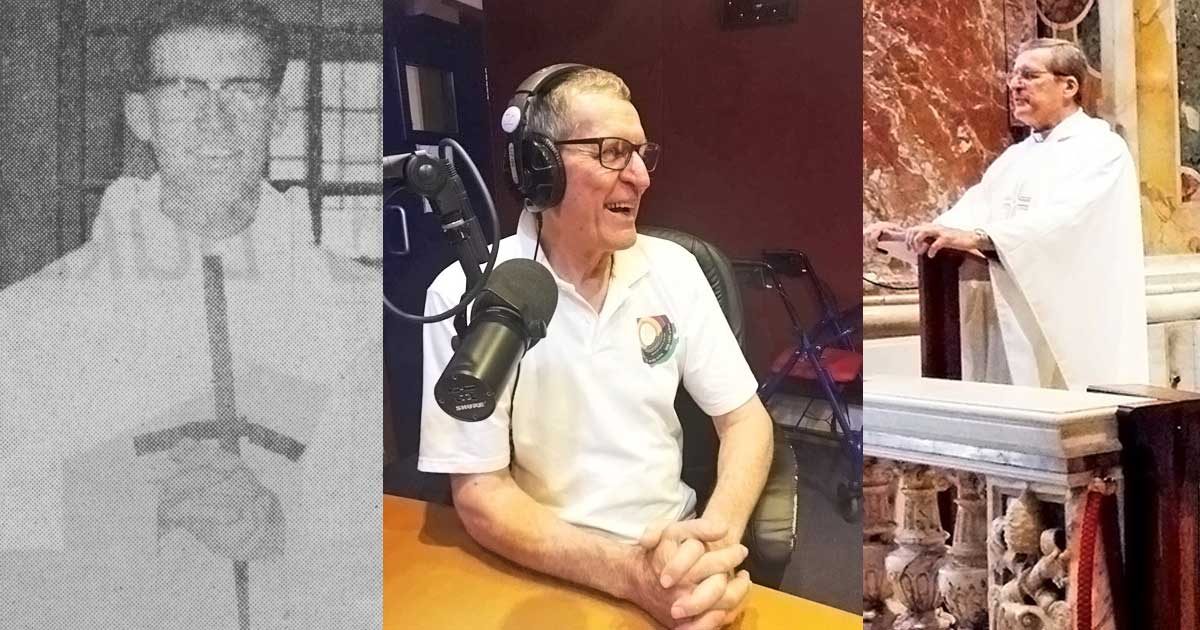 Fr Emil Blaser OP celebrates Mass at the tomb of St John XXIII in St Peter’s basilica in 2015. (Photo: Günther Simmermacher). Fr Blaser on the mic in the Radio Veritas studios and as a newly-ordained priest featured in The Southern Cross in December 1967.

One of South Africa’s most popular priests celebrated 50 years of priesthood on December 8. ERIN CARELSE spoke to Fr Emil Blaser OP about his priestly life.

For Dominican Father Emil Blaser, his golden jubilee of ordination this month is an occasion of thanksgiving and celebration, and for looking back with gratitude on the many moments which have touched him deeply in his half-century journey in the priesthood.

A Dominican friar with many years of experience in leadership and broadcasting, Fr Blaser has been presenting radio and television religious programmes since 1976. In 1995 he also presented a weekly Catholic TV programme on M-Net, titled Light of the Nations.

A former provincial of the Dominicans in South Africa, he served as associate secretary-general and media officer of the Southern African Catholic Bishops’ Conference in the 1990s.

It was while at the SACBC that he conceived Radio Veritas — and it was a long battle to get the station on air. It now broadcasts in Gauteng on 576AM as well as on DStv audio channel 870.

He remembers being given the go-ahead by the bishops and the Dominican Order to establish Radio Veritas as one of his greatest moments.

“I have enjoyed and continue to enjoy every moment of this ministry,” Fr Blaser said.

“It has not been easy due to financial constraints, and these have made me a fundraiser. Over the years I have learned much about effective communication and fundraising and have met many wonderful and generous people.”. 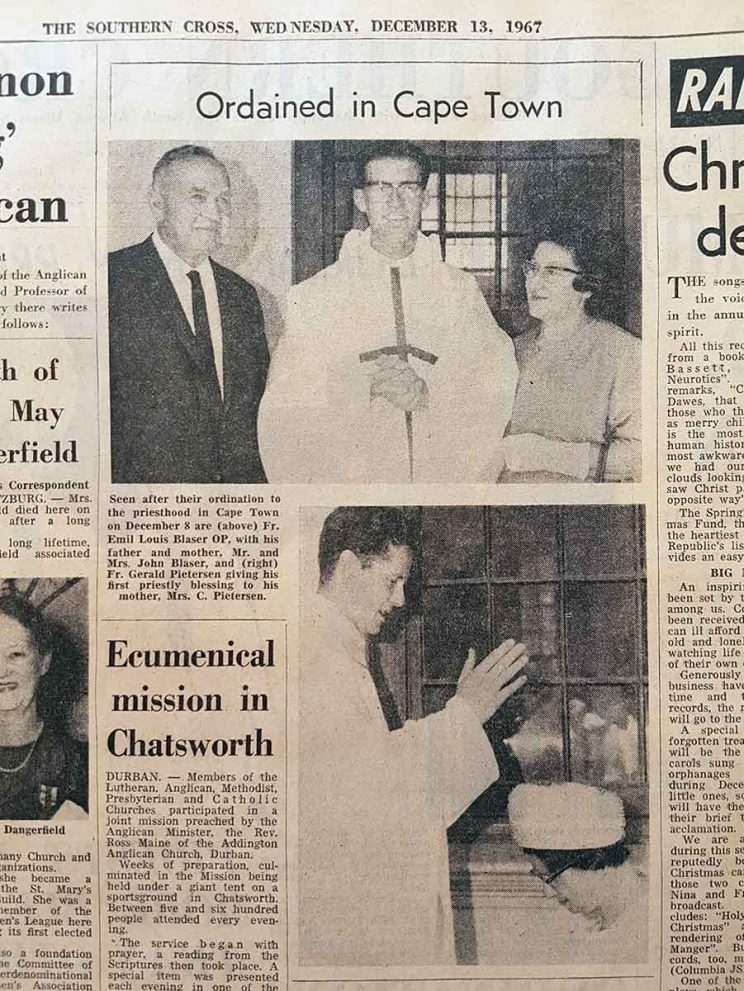 Fr Blaser remembers how deeply moved he was when his mother Margherita was decorated with the highly prestigious papal award Pro Ecclesia et Pontifice. “I am still very proud of her,” Fr Blaser said of his mother who died in 2012 at the age of 108.

The priest is grateful for the many privileges he has had in his priesthood.

“In my years as a priest, I have been to many places in the Vatican which are not normally open to the public. What a joy it was to meet with Pope John Paul II on several occasions. What a privilege to celebrate Mass over the tomb of Pope John XXIII. I was privileged to celebrate Mass at several of our famous Marian shrines, and as a priest, I have preached at many retreats and been humbled to experience God’s working in so many people.”

Fr Blaser enjoyed leading pilgrimages, a number of which he did in tours hosted jointly by Radio Veritas and The Southern Cross. Health problems mean that he cannot travel any longer; the “Saints of Italy” pilgrimage in September 2015 was his last.

There were privileges in encounters, too.

“I shall never forget how humbled I felt hearing the confession of Archbishop Denis Hurley during a retreat. During my years as SACBC associate secretary-general, I met many prominent leaders; among them was Nelson Mandela.

“But these were fleeting moments of privilege. As provincial of the Dominicans, I visited many countries and met many great people. What a privilege it was to welcome new Brothers into the order — and sad to see some leave. I have rejoiced in the achievements of our young Brothers.”

Fr Blaser says he has enjoyed his life in the priesthood.

“I am truly happy that after 50 years I am just a simple priest still enjoying time behind the microphone and ministering to Sisters in the twilight of their lives. At 75 I am still productive although somewhat restricted due to my physical handicap of an inflammatory disorder of the peripheral nervous system”.

The condition has robbed him of feeling in his fingers and toes, making even walking difficult.

“But even this is a blessing in disguise,” Fr Blaser said, “because it is an opportunity to combine my suffering with that of Christ, and thus my suffering is redemptive.” He added: “I wish I didn’t have this cross to carry.”

This time of his life has seen a deepening of spiritual life and prayer for Fr Blaser. “How I wish that some of the realisations I now have could’ve been with me years ago. But God understands and continues to be patient with me. I am humbled that despite my weaknesses and shortcomings, the Lord continues to use me in a powerful way,” the priest said.

He loves his Dominican life and priesthood and says he knows that he was born for this and accepts this gift and vocation—but always with the question: “Why me, Lord?”

“That’s the mystery of our vocation. And I can only answer with the words of St Peter at the Transfiguration: ‘It is good to be here’,” Fr Blaser said.

“I pray that I will continue to have the strength and inspiration to continue doing what I have been doing for so many years.

“For these years I am truly grateful to God, who has been very patient with this blunt instrument, and to all those who have walked this road with me — my family, my Dominican brothers and sisters, and all those who have shared my ministry in the media.

“For their encouragement, especially in moments of darkness, I shall forever be grateful.”

He recounts fondly the many that have walked the 50 years of priesthood with him, and as much as he would have loved them all to be at his golden jubilee, unfortunately, many were away and were unable to attend.

“There was a time in my life when I loved all the fuss and celebration, but I think I have grown through that to where I am today. I look back with gratefulness to many moments which have touched me deeply,” he said.

Fr Blaser wasn’t going to have any celebration at all due to the expenses involved, but he will have a small celebration of his 50 years of priesthood on December 8 at the Johannesburg convent where he lives with retired Dominican sisters, whom he regards as his immediate family and support.

“In these difficult economic times, we simply do not have money to spend on big celebrations. I’ve invited a handful of people to share this joyous occasion with me.”

Asked if he would do it all the same way again, Fr Blaser replied: “Certainly, without hesitation.”

But there would be tweaks. “I would, however, value the opportunity of doing studies in communication and being given the opportunity of studying languages in various countries. I love sound, music and languages. Much of what I know I have picked up along the way in life.”