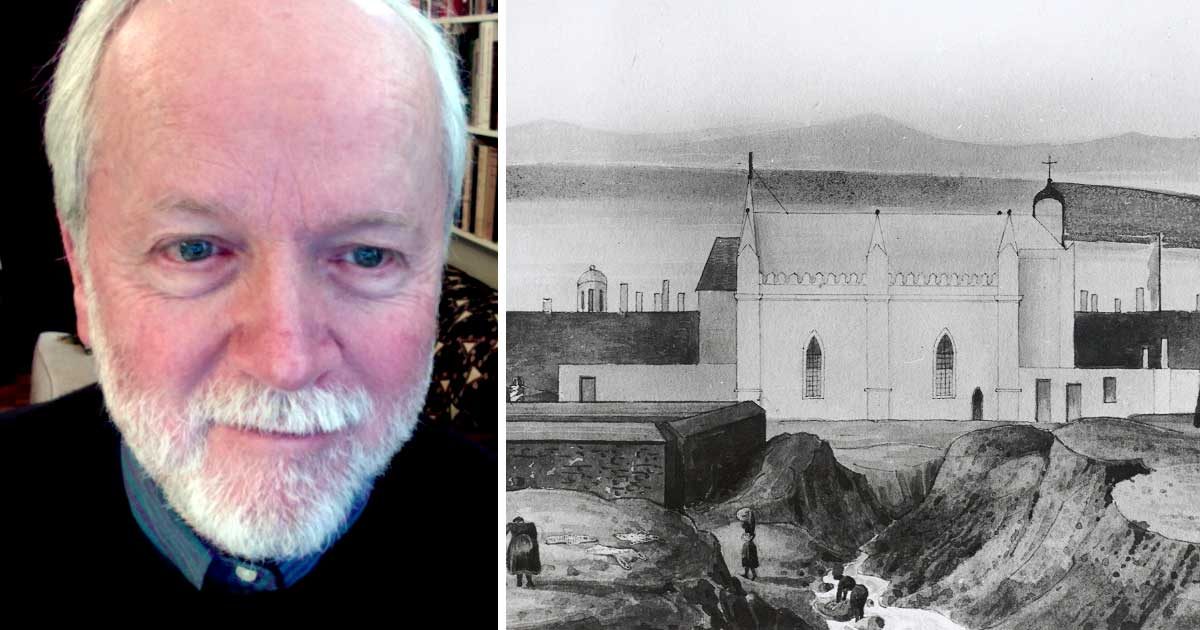 The 200th anniversary of the Catholic Church establishing its presence in South Africa is a jubilee that must be celebrated. Martin Keenan, whose series of articles on the beginnings of the Church in our country will start next week, tells us why.

In the year leading up to the 200th anniversary of the Catholic Church being established in South Africa, we are running several articles on the history of the early Church.

Fr Anthony Egan SJ is giving the general overview of that history; four of his articles have already appeared.

Martin Keenan, a Catholic from Paarl in the Western Cape, has researched the history of the very early Church in South Africa in detail, and his series of articles will begin to run in The Southern Cross starting next week.

In this Q&A, Mr Keenan explains why the anniversary is so important to the whole Southern African Church.

We are in the run-up to the 200th anniversary of the Catholic Church being established in Southern Africa, with the celebrations culminating next June. What happened in June 1818?

On June 7, 1818, Pope Pius VII received in audience the secretary of Propaganda Fide and approved their decision to create a new vicariate, with the English Benedictine priest Edward Bede Slater as vicar-apostolic receiving the title and character of bishop. The pope also directed that the necessary documents, called “papal briefs”, be drawn up.

There are a few things to unpack here. Firstly, what is Propaganda Fide?

It is a department of the Roman curia which was established in 1622 by Pope Gregory XV to help him better carry out the divine mandate to go and make disciples of all nations (Mt 28:19).

Briefly, what do we need to know about Pope Pius VII?

Barnaba Chiaramonti (1742-1823) was an Italian Benedictine monk. He was 58 when he was elected pope in 1800. He had a turbulent time with Napoleon Bonaparte who cajoled and bullied him, invaded Rome in 1809, took him prisoner, blocked papal administration until 1814, and forced him to dismiss his right-hand man, Cardinal Ercole Consalvi.

What is a vicariate, such as the one which Pope Pius VII set up in South Africa in 1818?

It is a territory under the pope’s immediate jurisdiction which he exercises both through his local representative—the vicar apostolic, who has the title of bishop—and his team of assistants in Rome, the Congregation for the Evangelisation of Peoples.

In the Southern African pastoral region there is presently one vicariate, Ingwavuma in KwaZulu-Natal. Francistown in Botswana was recently upgraded from a vicariate to a diocese.

What vicariate was created in 1818?

It is often said that this South African vicariate is the “Mother Church” of Australia. Is that correct?

The idea is appealing, but no. In April 1819, Pius VII approved the decision of Propaganda Fide to give Bishop Slater additional responsibility for the two British colonies in Australia, New Holland (now New South Wales) and van Diemen’s Land (now Tasmania).

In 1834 Pope Gregory XVI appointed another bishop to take over Australia. In 1837 he entrusted the Cape to an Irishman, Bishop Griffith, leaving Bishop Slater’s successor, Bishop Morris, with Mauritius.  So Australia was never part of the Cape vicariate.

Bishop Slater didn’t reside in Cape Town but went to live on Mauritius? Why was that?

In March 1819 Pius VII had previously agreed with Propaganda Fide to give Bishop Slater responsibility for the vicariate of Mauritius as well. There were far more Catholics in Mauritius than at the Cape.

The British government was also anxious not to cause ill-feeling among Anglicans at the Cape who had no bishop at that time. So it made better sense for Bishop Slater to reside in Mauritius

On New Year’s Day 1820 he stopped at Cape Town on his way to Mauritius and spent three Sundays there.

He said Mass in Rondebosch, introduced to the governor Fr Patrick Scully—the Irish priest whom he would leave behind—and approved a committee of elected laymen to run the finances of the Catholic congregation.

Was Fr Scully the first priest to live in the Cape?

Three Dutch priests had come as missionaries in October 1805, but when the British recaptured the Cape in January 1806, they agreed to repatriate the Dutch garrison at Britain’s expense.

The three Dutch priests were all on the military roll as chaplains and were repatriated along with the garrison. That’s all we know.

So if there were priests in the Cape in 1805, why didn’t we celebrate the bicentenary in 2005?

There is no reason why we should not have done, but through force of circumstance the Dutch plan—directed and supervised by Propaganda Fide—broke down and no vicariate was created under the earlier plan.

The plan implemented in 1818 was a new start and has run without a break until today, although with administrative changes from time to time.

Why so long from the Dutch priests’ departure in 1806 to Fr Scully’s arrival?

It was hoped the British government might allow the Dutch priests to return, and pay them salaries as military chaplains as before. But Britain was fighting a worldwide war with France, and no request for government assistance was made until 1817.

Also, from 1806 to 1814 Propaganda Fide was paralysed by French interference, and the pope was isolated from his advisers due to his exile.

Is there any Catholic history before 1805?

Yes. During the Portuguese voyages of discovery in the 15th century, navigators consecrated Southern Africa to God by naming natural features after events in salvation history, or after the Blessed Virgin Mary, or saints.

For example, Vasco da Gama, having sailed for many days out of sight of land, named the land sighted on Christmas day, 1498, Tierra de Natal (the land of the Nativity).

Under the colonial administration of the Dutch East India Company, or V.O.C., many Catholics lived at the Cape, although they were deprived of Holy Mass.

Without priests there are no sacraments, and without bishops there is no Church. The events of June 1818 launched the official presence of the Catholic Church in Southern Africa, even though at that time the vicar-apostolic didn’t actually take up residence here.

Before 1805, wasn’t Catholicism prohibited at the Cape?

Before 1805 there were Catholics but no resident priests and there were restrictions on what visiting priests could do, but they were never punished or forbidden to meet Catholics. There is no evidence Catholics were harassed or had to live in fear of being discovered.

There is only one case — in 1824 under the British — where we know a Catholic suffered financially for his faith, and that was because of a discriminatory law abolished in 1829.

Let’s turn back to Fr Scully, the first parish priest in South Africa, so to speak. What did he do in Cape Town?

From February 1820 Holy Mass was said on Sundays and Holy Days at 11am in a warehouse on the Buitenkant.

In April 1821 Fr Scully asked the Burgher Senate to give him land on which to build a church, parsonage and school. The parsonage and church, built mostly with bank loans, were both in use before he left for London in July 1824.

What is the darkest part of the early history?

In May 1832 the congregation in Cape Town split into two camps. One faction wanted the priests excluded from all involvement in the congregation’s finances. There was a rowdy meeting in the chapel on Trinity Sunday and harsh words were spoken. It was a total breakdown in charity.

Those who didn’t get their way left the Church, although some were later reconciled.

How was that crisis resolved?

In June 1832 Fr Rishton, a successor of Fr Scully, approved new statutes for the churchwardens. Minutes of their meetings down to December 1836 are still in the diocesan archives in Cape Town.

We can see it operated exactly like a modern parish finance council, presided over by the parish priest. They kept careful records of income and expenditure and informed the congregation about major developments.

Wasn’t the Catholic Church a “settler church” at the beginning?

No. From the first eye-witness account in 1685, Catholics in Southern Africa have been of all races, all classes and all conditions of life: black, white, rich, poor, slave, free.

Until 1838 when the last trace of legal slavery ended, the Church at the Cape was just like the early Church as we find her in the New Testament: universal.

How do we know about any of this history?

There are all sorts of original documents in archives in Europe and Cape Town, many of which have been published, including the Papal Briefs of 1818 and 1819. Through the Internet, these are becoming more and more accessible.

For the rest it is necessary to visit the archives. All that work has been done, most of it in the years from 1908 to now.

What makes this history important?

Pope Pius VII brought Southern Africa within the jurisdiction of the Apostolic See; for that reason the Catholic Church here belongs to the Latin Rite.

Because he and his successors in the Chair of Peter have never ceased sending bishops here, it is not mere history but part of a link in a chain uniting us with the Apostles.

And so how should we celebrate the bicentenary?

On a practical level, the archdiocese of Cape Town has a busy programme, and, at the invitation of Archbishop Brislin, the Southern African Catholic Bishops’ Conference has embraced the bicentennial jubilee and decided to mark it — because this is not just a local event but one that applies to all of Southern Africa.

But there is the spiritual dimension as well. We celebrate the life of the Catholic Church as she has grown over the last 200 years.

Because it is not just an anniversary but a time of grace, it is called a jubilee: a time for repentance, for making a firm purpose to amend our lives individually, and as a community, and for thanking our heavenly Father for the gifts with which he constantly blesses us.

The first of Martin Keenan’s articles, in search of SA’s first three chapels, will run next week.