Lessons From A Hard Mom 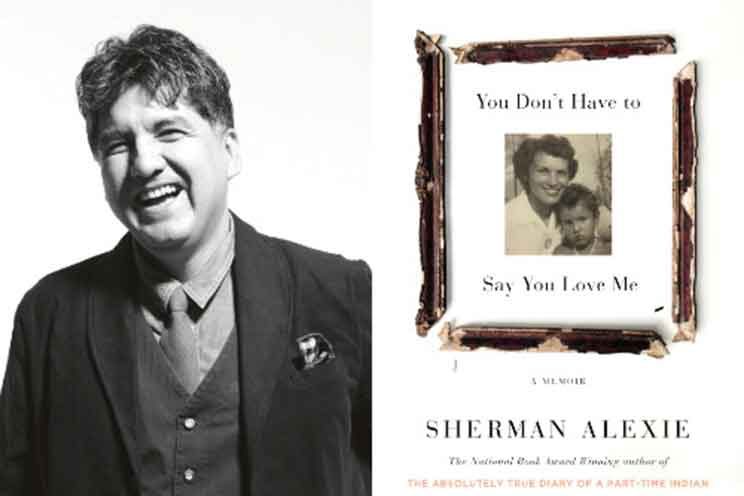 Author Sherman Alexie and the cover of his book You Don’t Have To Say You Love Me.

It has been a year when the dark clouds of death came into closer proximity to me in more ways than one. As it closes we are again about to bury a lifetime friend and peer who finally lost her battle to an aggressive form of cancer.

Some of us also have heard the distant footsteps of the cancer-reaper’s cycle. But,  God willing, we still hope for more decades to burn.

Sherman Alexie, an American writer of native descent, recently released a heart-wrenching memoir about growing up in the American Indian Spokane Reserves. It is more of an interrogation of his vaguely felt love for his mom, and a veiled mourning for her death from cancer. This can be determined from the melancholy title of the book: You Don’t Have To Say You Love Me.

Alexie begins by saying that “poverty was our spirit animal”. We, the children who grew up under apartheid, know the totem poverty as well.

“Self-preservation was my religion,” Alexie writes. Again, this sounds just about right for all poor children.

You’d expect the book to be depressing, Dickensian even, but Alexie is a gifted writer who uses irony and self-deprecation in a masterly way: “I don’t believe in ghosts. But I see them all the time.”

Such sentences are common in his writing. And the ghost in this book, of course, is that of his mother. Alexie feels he ought to fault her indifference to them as children but can’t quite make himself do that because he recognises that without it he couldn’t not have been the tough-love father himself he has become.

For instance, he narrates an occasion when his mother was first committed to the hospital. The obvious thing would have been for him to spend a few days besides her bed, be the dutiful son and all, like his siblings.

But, he says, “because our mother had often abandoned us as children, I knew exactly that my place at that moment was to be with my own children, not her”.

That is the gift-lesson he received from her wrong choices; the severe mercy of how to choose when it comes to the crunch. It makes you appreciate more St Paul’s saying that everything works for good to them who are called according to [God’s] purpose.

Coping With Grief and Guilt

Alexie goes on interrogating the latent guilt such decisions leave one with. We know that every decision has consequences we must learn to live by.

He doesn’t deny that from the outside this looks callous, like him avenging himself on his mother. From within, things are much more complicated than that, is what he is saying, taking greater comfort in knowing that his mother would probably approve.

This is not a book, like C.S Lewis’ Grief Observed, but an instruction manual of how to cope, not only with grief but also with the feelings of guilt that come with surviving (he knows his body is going to end up succumbing to cancer also).

Something about growing up poor, and outside the Western culture, makes one not peg too much on verbal communication, something pop psychology regards as the golden path to better understanding.

When you grow up poor, particularly in native culture, you learn to understand people’s communication by their silences, and judge them by their actions rather than by what they say.

Most of the time, the words of the poor are lies to help them cope with untenable situations, so a child quickly learns not to put too much emphasis on them.

Being poor hones one’s skills to read people’s intentions by even their failures and cruelties rather than their phony kindness and bribing love. This is the reason why poor children are better matured at early ages.

For instance, a poor child will understand by instinct that a relative with a flogging rod is usually a safer place to be than one who bribes by presents of sweets, which can lead to all sorts of horrible abuses.

As a writer, Alexie calls himself a “talented liar”— it’s his own warning to the reader of the memoir that he is not a reliable witness of his own experiences.

He feels there’s more real truth in novels than in non-fiction books. He relishes in the sad irony that the only voice his over-domineering mother has now is what remains in her children’s memories, which in some perverse sense is actually a final triumph over her.

From there he brilliantly goes into the psychological forests of how the abused tend to become the abuser, a chain he is determined to break in his own branch of the family.

You Don’t Have To Say You Love Me is a book of harsh realities and wisdom learned from the ultimate strains of life.

Those who can’t take much of harsh reality may not be able to stomach it. But there’s something about death that makes us urgently weary of pretences, vanities and games of egoistical self-deceptions.

May we live in uninteresting times in the coming years.

Are Courts Baby-Sitting our Democracy?

Why There’s No Joy in Schadenfreude