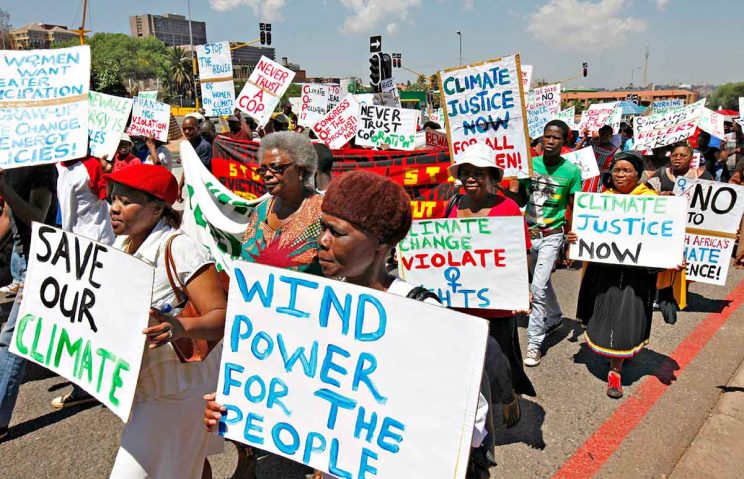 People in Durban protest for the environment. In his article, Antonio Tonin proposes to use Pope Francis’ encyclical on the environment, Laudato Si’, as the basis for a Catholic response to all that is destroying the world and humanity. (Photo: Siphiwe Sibeko, Reuters/CNS)

The spirit of Pope Francis’ encyclical Laudato Si’ needs to infuse the thinking, planning and implementation of all present and future activities, to achieve the injunction: Caring for Our Common Home, for the benefit of all mankind.

This spirit does already permeate the existing religious and charitable institutions which provide support and succour to the poor, elderly, sick, refugees, trafficked men, women and children, and the disadvantaged of this world.

On a very practical level Laudato Si’ makes it abundantly clear that humankind, although the most highly developed and intelligent species on earth, is nevertheless a very integral and interdependent part of the environment.

It must therefore have the humility to realise that the uncontrolled exploitation of the earth’s resources, and resultant destruction of the environment, will eventually lead to the demise of these resources—and mankind as well.

To live peacefully and sustainably in a forever limited environment would mean a complete overhaul of the world’s neo-liberal free market economic system which is controlled by the corporate world. The indisputable reality is that the environment is the real economy, and limited — without it nothing can exist.

The companion reality is that science has not yet managed to overcome the impossibility of squeezing two litres out of a one-litre container. The earth and all its resources are limited, and it is therefore impossible to extricate any more when a particular resource is exhausted.

The traditional economic system of only labour, resources and profit is no longer sustainable.

It took the mother of two young children to stand conventional economics on its head and produce a paradigm shift in economic thinking — one that would result in the most humane, compassionate, sympathetic, understanding philosophy of the equitable, sustainable provision of the necessities of life for both the environment and all living creatures.

Known as Doughnut Economics, it is shown visually as the typical doughnut with an inner and outer circle with a hole in the middle.

Between the two circles lies the safe and just space for humanity, supported by the regenerative and distributive economy.

These are encompassed by the ecological ceiling, beyond which lies an overshoot of pressure on Earth’s life-giving systems, such as through climate change, ocean acidification and chemical pollution, and so on.

The Doughnut Economics model was developed by Kate Raworth, an associate of Oxford University’s Environmental Change Institute and of the Cambridge Institute for Sustainability Leadership

“Put simply, it’s a radically new compass for guiding humanity this century. And it points towards a future that can provide for every person’s needs while safeguarding the living world on which we all depend,” she says.

“Below the Doughnut’s social foundations lie the shortfalls in human wellbeing, faced by those who lack life’s essentials described above.

“Beyond the ecological ceiling lies an overshoot of pressure on Earth’s life giving systems, such as through climate change, ocean acidification and chemical pollution. But in between these two sets of boundaries lies a sweet spot—shaped unmistakably like a doughnut—that is both an ecologically safe and socially just space for humanity,” she says.

“The 21st-century task is an unprecedented one: to bring all of humanity into that safe and just space.”

The implementation and practice of Doughnut Economics worldwide, which encompasses the philosophy of Laudato Si’, would be one of the most powerful sources of good humankind has ever known.

What Catholics can do

As Catholics we need to set the pace of change by immediately and actively engaging with first of all Catholics on local and diocesan levels, and then nationally both government and the private business community, to assist in the mindset change required to establish an economic system which will be sympathetic to people and the environment, and will ensure a dignified, sustainable future for all.

It is important to bear in mind that the situation which we and the environment find ourselves in, has been seriously developing for at least two centuries, and has accelerated at an ever-increasing speed since the end of World War II.

In 1972 the Club of Rome — an association of world, civic and business leaders committed to peace — in conjunction with Massachusetts Institute of Technology, published their seminal report “Limits to Growth”. This looked at various scenarios that were likely to happen if uncontrolled economic expansion were to be left unchecked. A lot of these scenarios are now very serious fact, with the resultant irreversible diminution of resources.

This is all further compounded by the effects of accelerating climate change.

All the above indicates the extremely urgent worldwide action that is needed, and I will submit that if we are to meet the goals of the 17 Sustainable Development Goals by 2030 — which all nations have agreed to and signed for—then we must treat our possible drastic human condition as if we are expecting very soon a cataclysmic disaster the likes of which humans have never experienced in living memory.

There are only 12 years left to implement and progress to a successful result the 17 Sustainable Development Goals by 2030 and at the same time hold the average global temperature rise to 1.5°C.

I suggest that from now on the Catholic Church uses the philosophy of Laudato Si’ as the umbrella under which all our institutions operate, that the laity become equal partners in all activities, and that the clergy and hierarchy provide the spiritual guidance that will underpin all activities.

That process may initially start by establishing diocesan and parish entities of Caritas, as is planned by the Southern African bishops. Let us pray for Bishop Duncan Tsoke, who has been tasked with spreading Caritas to all levels of the local Church, that the Holy Spirit will endow him with all the strength and wisdom he needs in taking on this very important mission.

Thereafter we would need to spread our influence among other denominations.

To be constantly aware of our country’s progress towards meeting its commitment to the 17 Sustainable Development Goals, we would need to have copies of all the programmes the government has put in place.

This would serve the twofold purpose of us working in conjunction with the various government departments and assist us in addressing the particular projects that are within our area of operation.

For the next step it will be necessary to spread the message of Laudato Si’ to schools and universities throughout the country.

Finally we would need to approach all  other institutions and associations such as the financial and banking sectors, commerce and industry, recreational bodies and NGOs to spread the message inherent in the missions of both Laudato Si’ and Caritas  Internationalis.

We need to rediscover our real need for being on this earth, and for this we need to look deeply into our souls, with the constant help of the Holy Spirit.

Antonio Tonin is a member of Holy Spirit parish in East London.

US survey: Religious Superiors Back Possibility of Women Deacons