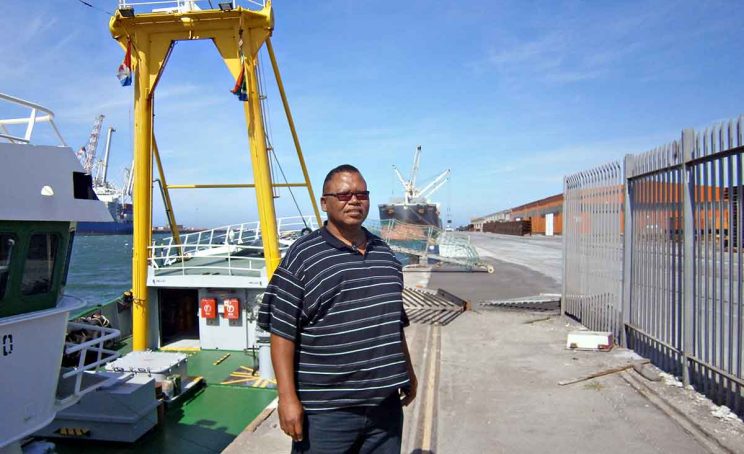 John Conway, a ship-visitor for the Apostleship of the Sea in Port Elizabeth. The organisation is always looking for more volunteers to visit ships.

Many of us will have been travelling for pleasure over the Christmas season — to see friends, to go to holiday resorts, to spend some time relaxing, or just (like Joseph in the Gospel story) to return to our home towns for a family reunion.

I hope that we are already conscious of and grateful to the people who are working so that we can travel for pleasure — the police, roadside assistance, staff at service stations and toll booths, even the much-maligned taxi drivers.

What Do Seafarers Do?

However, there is one group whose work over the holiday season will probably go unnoticed since they work invisibly during Christmas and indeed throughout the year. That group are seafarers.

Some 95% of world trade is carried by ship and, no matter how advanced the technology, ships still need manpower (and womanpower) in order to operate.

From my window in Durban I can gaze out at the huge container ships on the horizon waiting to come into port. They look quite magical and festive as their lights twinkle on the horizon like so many Christmas trees.

The reality of those ships is that they are dirty and difficult places to work. Yet without them, and the people who work on them, so much of what makes my holiday special would not be possible — no Chinese decorations to put on my tree, no Indian spices to flavour my food, no new American gadgets to waste the afternoons, no Scotch whisky to toast the New Year. And, of course, no oil to drive the vehicles that make everything else possible.

Each year about 13000 ships call into South African ports, notably Durban, Port Elizabeth and Cape Town. That equates to 260000 seafarers whose work is utterly necessary for each of us even if we do not notice it.

Their work is very lonely. Seafarers are terribly isolated, cut off from family usually for nine months at a time. They are working with others, but on a huge ship they are with fellow crew whom they have not chosen and who may not even speak their language. They do come into a port from time to time, but they almost certainly do not know anyone and they might be miles away from the town.

Little wonder that suicide is many times higher for those working at sea rather than on-shore.

At the same time, it is also one of the most dangerous occupations. Each year 1000 people will lose their lives at sea because of accidents or storms; yet most of us take them and their work for granted.

There is one group that does not take them for granted and of which we as a Catholic community can be very proud. It is called the Apostleship of the Sea and operates all around the world in over 300 ports.

The Apostleship of the Sea

The Apostleship of the Sea (or AoS) worldwide has more than 1000 port chaplains and volunteer ship-visitors who each year visit about 70000 ships. That means nearly 1 million individual seafarers will meet someone with a friendly smile who’ll say: “How can we help you?”

All seafarers need and deserve help, and all are served by the Apostleship of the Sea and the similar organisations of other churches engaged in this ministry.

As a Catholic community we have a particular role to play since historically so many seafarers are Catholic. In centuries past they would have been the Portuguese, Spanish or Italian explorers—think of Vasco da Gama or St Francis Xavier, both of whom touched the shores of Natal (which Da Gama named after the feast of the Nativity).

Today many seafarers are their spiritual children, from Goa and the Philippines. Indeed, by some estimates on certain sea lanes, as many as 40% of the seafarers are Catholic.

All seafarers can benefit from the very concrete ministry of the priests and lay volunteers who work with the Apostleship of the Sea. It can be as simple as having a friendly person to talk to, a chance to use e-mail or a phone to contact family, local information about the port, assistance in buying something, receiving a small gift, accessing transport to get away from the ship for a few hours to breathe a different air.

Imagine Not Bering Able to Attend Mass for Months

The Catholics on board also benefit from the religious ministry of the Apostleship of the Sea: someone to pray with them, give them spiritual reading materials, take them to Mass, or even to have a priest come on board and say Mass for them.

We sometimes gripe if we have to travel a bit further for Mass or if Mass is not available at the exact time that suits us. Imagine if you were a faithful Catholic, as many of our seafarers are, and you were not able to attend Mass for months on end.

Much of the work of Apostleship of the Sea is necessary but very ordinary. Tragically there are times when they also have to do extraordinary things.

Their website has some humbling stories about how, for example, they have helped organise a Requiem Mass to pray for a deceased seafarer or comfort his colleagues. In some cases, a ship and its crew have been abandoned by an unscrupulous owner trying to avoid his moral or legal responsibilities and they are stuck in an unknown port, not knowing how they will get back to their homes.

Keen readers may have noticed the launch of a volunteer recruitment campaign in the pages of The Southern Cross looking for more ship-visitors. With a larger team of locals, the Apostleship of the Sea can visit more ships and put a person from the Church in front of a seafarer to provide practical and faith support.

The magi travelled on their ships of the desert to bring gifts of gold, frankincense and myrrh to the infant Jesus. As you enjoy all the wonderful goods that have been brought to you from across the seas this Christmas-time, take a moment to say a prayer for the thousands of people whose hard work makes this possible.

And, if you can, consider volunteering in 2018 or donating to help the Apostleship of the Sea support our seafarers.

Image and Imagination: Devotions are not the same for all