The Mystery of the Eucharist – Our Source of Life 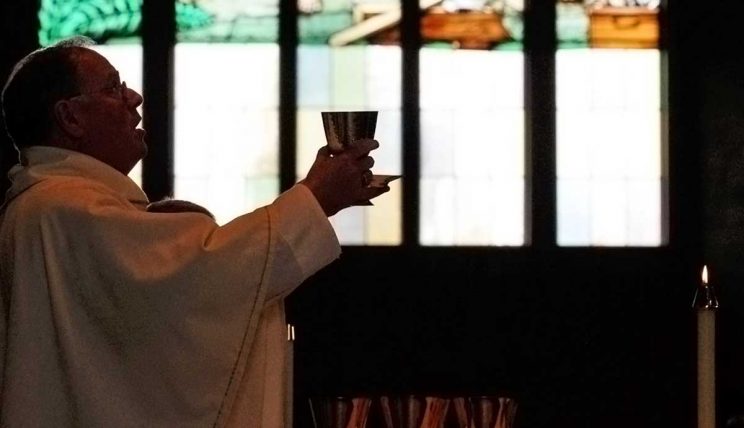 The mystery of the Holy Mass lies solely in the Eucharist, the Eucharist being a commemoration of the Last Supper event, writes Joachim Anakwenze.

He reminds us of the Jewish Passover feast which recalls the Passover by the blood of the sacrificial lamb marking the doorposts of Israelites.

The angel of the Lord, seeing the blood, will pass over and not kill the firstborn of those households.

Jesus Christ as the Lamb of God was ready to pour out his blood for the salvation of mankind. He did not hesitate to do so because he was born to die.

This is why at his presentation in the Temple, Simeon prophesied to Mary about a sword piercing her heart, making her one with her son in his suffering.

The Eucharist, according to Vatican II, is the source and summit of our Christian life (cf. Lumen Gentium n. 11).

The blood of our salvation

Our Christian faith stems from our knowledge of Christ as the true Lamb of God who poured out his blood for our salvation.

We go back to the Eucharist by a pouring out of our life and blood in love when we die. God the Father offered his only begotten Son in love to us so that through him (Jesus), we might gain eternal life and return to dwell in love with the Father. The Eucharist, then, is a sacrament of love.

In the Eucharist, God pours out himself as a libation for us and we, in turn — having been won over by the supreme sacrifice on the cross of Calvary — give ourselves totally back to God.

Eucharist and the Mass

At every Mass, according to the Catechism of the Catholic Church, the sacrifice of the cross is re-enacted and relived. The words spoken by Jesus at the Last Supper: “Do this in memory of me”, are both a command and a prophecy of what will continue to be passed down from one generation to the next until this present day.

The Church, in obedience to this command continues to celebrate the Eucharist in his memory.

They speak the same words of Christ and invoke the Holy Spirit Epiclesis on the bread and wine which transubstantiate to become the body and blood of Jesus Christ.

This is the faith of the Church

Where lies the greater mystery of the Eucharist? It is in the fact that, during the Holy Mass, Christ comes down in fullness to assume the position and role of the altar, the victim and the priest. Jesus presented himself as the temple of God (Jn 2:19-21), and is there a Temple without an altar? It is the altar of sacrifice that makes the temple, not the gifts (Mt 23:17-19).

According to Catholic author Jeffrey Pinyan in his reflection, Why is the altar a sign of Christ? Jesus is the “gift” being offered on the altar, but he makes it clear that the altar makes the gift sacred; you certainly would not offer a sacrifice on an altar less dignified than the sacrifice itself.

“That makes Jesus who sanctifies both the gift and the altar.”

As the gift or victim of sacrifice, Jesus is presented on the altar in remembrance of his passion and death on the cross of Calvary.

The Catechism teaches us that both sacrifices — of the cross and the altar — are one and the same sacrifice.

In both, however, it is the same Lamb (unblemished) of sacrifice being offered as a victim (Isa 53:7), for the salvation of mankind. Being the altar and the victim, he is also the priest that offers the sacrifice on the altar.

During the consecration, it is Christ repeating through the words of the priest what he did at the Last Supper.

That is why the Church retained the words of Christ: “This is my Body…This is my Blood…Do this in memory of me”.

Jesus as the high priest (Heb 4:14; 5:10; 6:20) speaks to us through the instrument of the ministerial priest, who by virtue of his ordination, stands in the place of Christ (alter Christus). This is the culmination of the mystery of the Eucharist.