Where Cows are Worth More than People 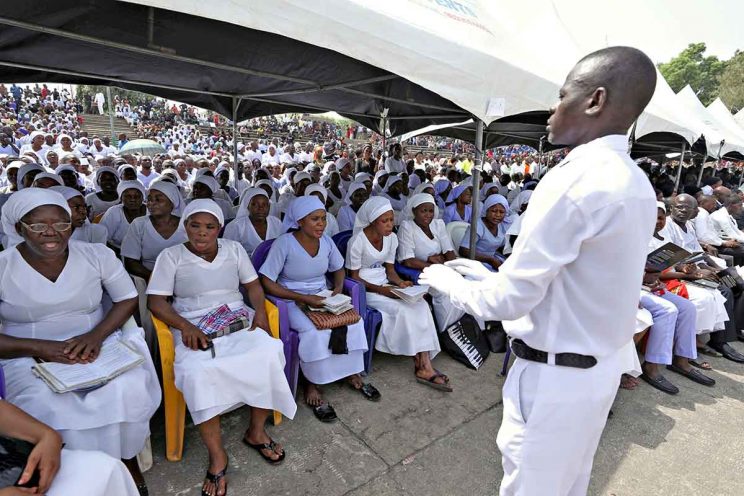 A Catholic choir sings during the January 11 funeral Mass for people killed by Fulani herdsmen in Makurdi, Nigeria. At least 80 people have been killed since the start of the year in conflict over fertile land in Nigeria. (Photo: Afolabi Sotunde, Reuters/CNS)

Ani Arinze – What is more important: a human being or a cow? While this may sound like a silly and irrational question, the sad situation on the ground in much of my Nigerian homeland is that innocent human beings are being slaughtered so that cattle can graze on their land.

Semi-nomadic herdsmen known as the Fulanis (also known as the Hausa-Fulanis) from northern Nigeria travel long distances throughout most of the country on foot in search of new cattle-grazing land — often at the serious expense of farmers’ cropland. It causes grave tensions between the mostly Christian farmers and the largely Muslim Fulanis.

While this has been a major problem since the early 1960s, the situation has got much worse in recent years. From 2015 there have been a record number of brutal assaults on innocent, unarmed Nigerians by Hausa-Fulani herdsmen who in most cases attack with automatic weapons.

It is a painful ordeal that innocent Nigerians suffer in their attempts to make an honest living. Many people live in serious fear — and receive little help from the government.

The new year has got off to a deadly start. Last month more than 80 innocent citizens of the majority Christian Benue state lost their lives to Fulani herdsmen who attacked their villages in the dead of night, murdering men, women and children.

And the killings continue in remote villages, while the government folds its hands and does nothing.

These sad challenges have led the Catholic Bishops’ Conference of Nigeria to issue a letter to the Nigerian federal government, titled “On the Recurrent Wave of Violence and the Cheapening of Human Lives in Different parts of our Country” .

In their statement, the bishops said that Nigeria appears to be under siege from many forces as “innocent citizens in different communities across the nation are brutally attacked and their resources of livelihood mindlessly destroyed. Property, worth millions of naira [Nigeria’s currency], including places of worship, schools, hospitals and business enterprises are torched and turned to ashes.”

They continued: “Since the repeated outbreaks of bloody conflicts in different communities across the nation, we observe with great sadness that thousands of innocent people have been hacked down in cold blood. Others have been exposed to situations of unspeakable suffering. Many others have been crushed and silenced, while their rights and dignity are trampled with impunity.”

Noting that with some degree of political will, government could take adequate steps to put an end to the human tragedies and save the country from the calamities of a civil war, the bishops sensibly advised: “It is wiser and easier to prevent war than to stop it after it has broken out”.

The bishops observed that “it would be stressing the obvious to state that a better alternative to open grazing should be sought rather than introducing ‘grazing colonies’”. They suggested that the government should instead encourage cattle owners to establish ranches, in line with international best practice.

Drawing on wisdom from the prophet Isaiah, the bishops pleaded: “We, therefore, urge all aggrieved parties to seek reconciliation through dialogue and mutual forgiveness. Above all, we passionately appeal to them to beat their swords into ploughshares, and their spears into pruning hooks.”

My brothers and sisters in Southern Africa, please pray for peace in Nigeria.

Ani Arinze is a young Catholic writer with a passion for evangelising youth. His column will run every eight weeks. He can be contacted at chinenye4chinenye@yahoo.com.