How Can SA’s Church Brand Itself? 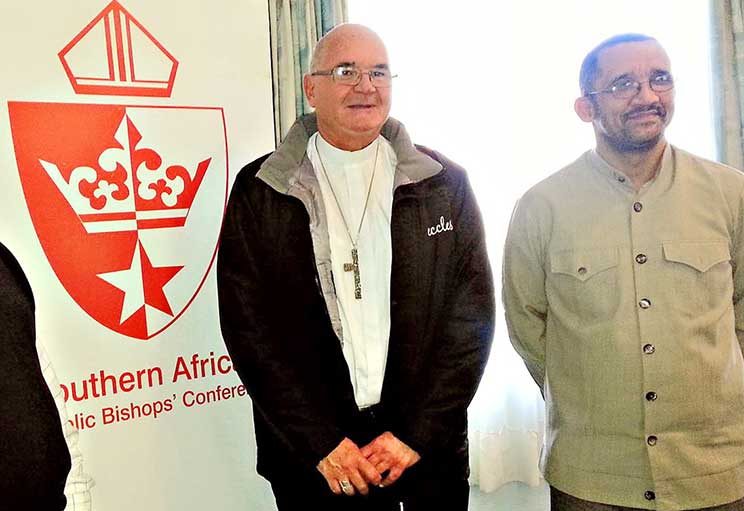 The SACBC logo is seen in a photo with the bishops’ conference’s president, Archbishop Stephen Brislin, and vice-president Bishop Sithembele Sipuka of Mthatha.

This year marks 200 years of Catholicism in South Africa. However, after so many years, there is no symbol, image or any such which says “Catholic Church” to any South African in the street.

One might suggest that the logo of the Southern African Catholic Bishops’ Conference (SACBC) does that. I beg to differ. The logo has very low visibility. It largely remains visible within high official circles and not on the ground. It is not even seen at bishops’ ordinations, anniversaries and funerals.

However, for me, the most fundamental challenge of the SACBC logo is not just its levels of communication but what it represents.

A Forced Marriage of Three Lands

Firstly, the SACBC covers Botswana, South Africa and Swaziland; three lands with little in common, historically and visionary. It is a forced marriage.

Secondly, the SACBC is a bishops’ body. Bishops are only one ministry in the Church (an oversight ministry). They are not the Church, though. The Church is the whole People of God, as Vatican II reminded us.

The designation of “bishops’” by definition makes the SACBC exclusive. The rest of us do not identify with its logo, at least from the branding point of view.

Thirdly, the SACBC is a “conference”. Though the dictionary admits the definition of a conference as “an association”, which is the meaning of the word in the SACBC, in common parlance it conveys a “meeting” of a temporary nature. Thus, many understand it as some “meeting” of bishops that has nothing to do with the rest of us.

Now, where else can we look? I can safely say that, in South Africa, the rosary somehow represents Catholicism. It rings “Catholic” in many people’s minds, though it is increasingly becoming just a common fashion accessory.

What does this point to? Mary represents the Catholic brand.

The Eucharist Should Be at the Core of Our Branding

However, this “Marian” branding perpetuates a wrong impression of the Catholic Church. Mary is not the Church but a member of it. She is the perfect model of discipleship within the Church. Though in her Assumption title Mary is the patroness of South Africa, she is not our identity. We do not worship Mary.

What represents Catholicism then? I propose that it is the Eucharist — God’s paschal gift to us in which the risen Christ is really and fully present for our salvation. This should be the core of Catholic branding and clearly represented in the logo, with some specifically Southern African symbolism.

A Marian symbol is welcome and may even be necessary in the logo as well. However, as it represents the Star, it should not overshadow the risen Son, Jesus Christ our Lord who is our only Sun.

There is so much talent to produce this logo in South Africa. The logos of the sainthood cause for Bl Benedict Daswa, Mini World Youth Day and Radio Veritas have been designed by gifted local artists.

A competition with a clear brief will give a wide variety of logos that the bishops, after seeking consensus of Catholics in the country, can choose from.

Blessed 200th anniversary, Catholicism in South Africa! We are looking forward to the grand national celebration of this milestone.

Join Fr Mngadi on The Southern Cross’ pilgrimage to Uganda and Rwanda in June. See www.fowlertours.co.za/africa for details.