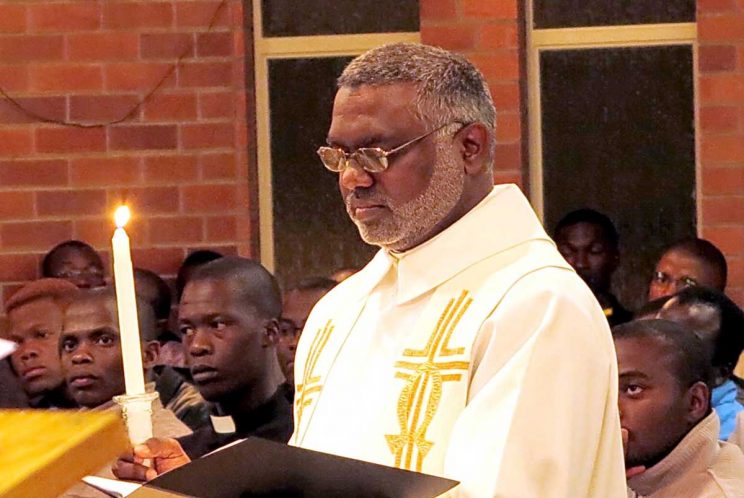 South Africa’s three provinces of the Oblates of Mary Immaculate (OMI), as well as the order’s Zimbabwe mission, are amalgamating to focus their mission. The Oblate general superior and council have by official decree erected the new province with the name of OMI Province of Southern Africa.

There were many starts and stops to the amalgamation discussion and process. The first time the idea was mooted in South Africa was in 1983, which saw the combined numbers of Oblates at over 300. Thirty years later, in 2013, with fewer than 150 members, the discussion was taken up more earnestly by the provincials of the three provinces, Frs Mokone Rathokoa, Ronald Cairns, and Vusumuzi Mazibuko.

Fr Frank explained that such a restructuring is now a common feature of religious congregations throughout the world. One important reason is the drop in membership.

“The rationalisation of human resources, aided by the ease of travel and communication in our modern world, allows larger territorial reaches to be managed by one provincial team and to focus our mission to the poor and most-abandoned with more effective leadership,” Fr Frank told The Southern Cross.

The official public installation of the new office will take place at a celebration on the May 21 feast day of St Eugene de Mazenod, the founder of the Missionary Oblates of Mary Immaculate, in Germiston, Johannesburg. More details will be finalised closer to the time.

READ  Beijing Retains a Tight Grip on the Church

A Spirit of Renewal

“There is a spirit of renewal that is sweeping through all the Oblates as we prepare for May 21, and our unity beyond that day,” Fr Frank said.

“We see this as a kairos moment — a time of grace and rejuvenation of our Oblate mission, as this unification or re-founding draws us to reflect again on our charism, captured in our constitution and rules, with a renewed commitment to living it in apostolic religious communities.”

The OMIs were instrumental in evangelising Southern Africa, especially the east coast and the inland regions, as well as Lesotho, which was evangelised by Bl Gerard, who was beatified by Pope John Paul II in 1988.

Until the appointment of Cardinal Wilfrid Napier, a Franciscan, as archbishop of Durban in 1992, the archdiocese was always headed by an Oblate, most famously Archbishop Denis Hurley.

The OMIs also founded St Joseph’s Theological Institute in Cedara, near Pietermaritzburg, where many of the region’s religious, from different orders are trained, and where Fr Frank is the president.