Let the Truth Set us Free

“The Truth shall set you Free.” These great words from St John’s gospel were for many months emblazoned on a banner hanging outside St Mary’s cathedral in Cape Town while Parliament — located directly opposite — was debating the Secrecy Bill.

Ex-President Jacob Zuma, the politician who masterminded that bill, seemingly to protect himself and others from legitimate criticism, will over the next few months be forced to argue his version of the truth under the watchful surveillance of the Durban High Court. 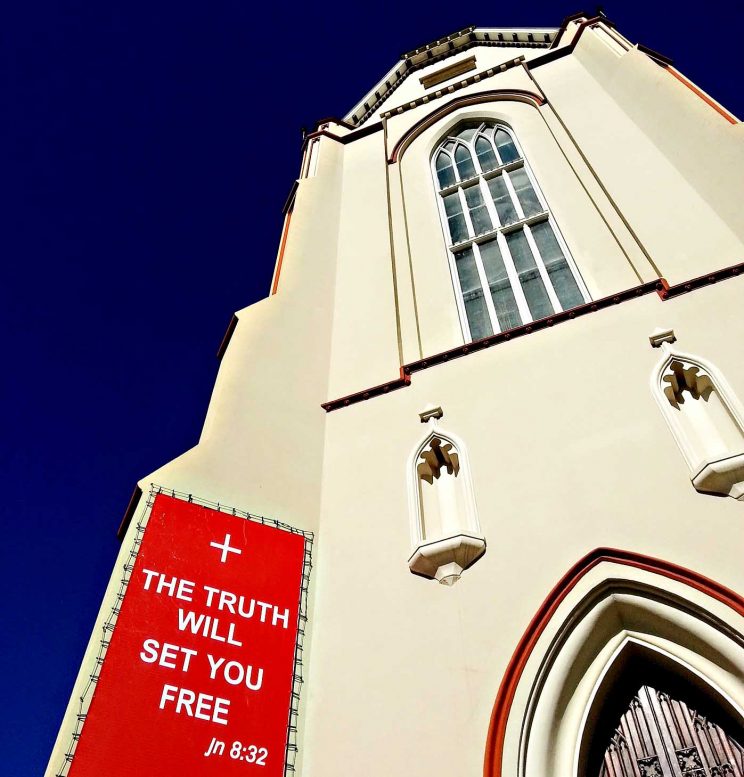 A banner of protest against the  proposed Secrecy Bill on St Mary’s Cathedral in Cape Town in 2014. (Photo: Günther Simmermacher)

This is the same courthouse where, 33 years ago, Archbishop Denis Hurley successfully challenged the Nationalist Government who had detained Catholic activist Paddy Kearney because, they said, they had ‘just cause’ to believe him a threat to national security. But the court ruled that if the Government could not demonstrate what precisely their “just cause” was, then it was assumed that they did not have one.  It was a landmark case that set a precedent to challenge future attempts to detain people without trial.

A landmark case in the Tshwane High Court recently has set a different precedent, of great importance for those of us who seek to help the homeless. It has established that municipalities do not have the right to confiscate homeless people’s belongings – in effect stealing their ID’s, medicines and other valuables, under the excuse of a “clean-up” operation. If such an operation is planned, it must be done in a way that respects the dignity of homeless people, no less protected by the Constitution than is the dignity of other citizens.

For all the difficulties, double-talking and compromises of SA politics, we can be proud that the SA legal system – more rather than less – is a bastion of truth and justice. That does not mean that it does not make mistakes, but we can generally trust it to defend us when other citizens and even government forces undermine our rights and our property.

The Catholic Church generally speaks positively of such interventions by courts to defend individuals, especially the most marginalised. But at the same time, I fear, there can be a tendency to treat the legal system as something which is important for shining a light on other institutions, but not one to which the Church wants to be subjected herself.

You can see why.  The story of the Church began with a whole evening of unjust trials – Jesus brought before the Sanhedrin and the Roman governor to defend himself against trumped-up charges and in a highly politicised process.  As we listened again to the reading of the Passion a few weeks ago, we instinctively felt the injustice of Jesus being condemned. Perhaps that is why much lesser figures when questioned by courts try to depict themselves as modern-day misunderstood Messiahs.

The Church’s birth through injustice – condemning not only Jesus but many of the early Apostles – has given it a good basis on which to challenge corrupt policing, biased courts and inhumane laws.  And of course she did so with great vigour during the Apartheid years. However, when she applauds a state for having a good rule of law, the Church needs to watch out for the tendency to still see herself above the law. 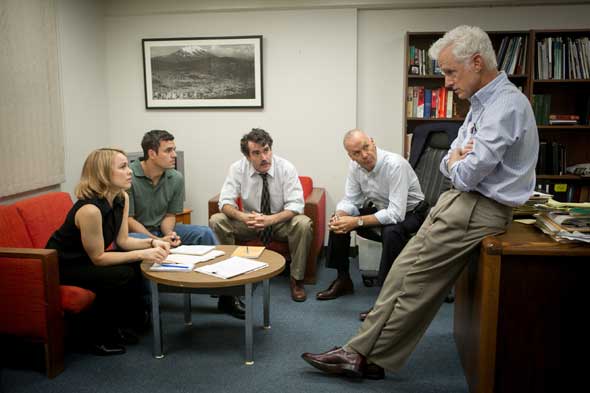 A scene from the movie Spotlight, which revealed the cover-ups committed by Church leaders in Boston to avoid scandal’. (Photo: Open Road Films)

The most unpleasant example of this, in recent years of course, has been the handling of child abuse cases.  Victims of the small number of offending Church workers (priests, religious and lay) felt even more betrayed by the Church when it was discovered in many cases that bishops had not reported the allegations but tried to handle things in their own way.  If any other institution tried to sort out matters internally when clear crimes had been committed, the Church would rightly join other activists in accusing a cover-up.  The film Spotlight showed what happened when the same standards of accountability were demanded of the Church in Boston, USA.

I once had a surreal conversation with a bishop about a personnel matter and I was trying to explain what actions were required under state law. To my surprise, given the horrific tales we had heard from other countries, the bishop kept insisting that we need only be concerned with Church law, not state law.

One of the Church’s justifications for handling problems internally has been the “avoidance of scandal”. Clearly, in the handling of child abuse cases, the scandal ultimately was not avoided but magnified.

Moreover, the “avoidance of scandal” approach effectively commits the Church to a strategy of silence and secrecy. How often have we heard about suspicions of theft from parishes or Church projects – by priests and by others – which have not been reported to the police “to avoid scandal”.  But since these are generally well known in the community already, the scandal is not avoided but compounded because now the suspect does not have a transparent trial and, when guilty, often faces little punishment and no restitution.

When I first arrived at the Denis Hurley Centre in Durban, I heard suspicions that one of our managers was stealing goods intended for the homeless. Horrified by this, I insisted that we investigate and an appropriate hearing with a lawyer was held. The individual was found guilty and fired.

Those who draw attention to bad behaviour within organisations — whether crimes or simply negligence — get called “whistle-blowers”. This is an unfortunate way of implying that the person, like a referee, is outside the fray. That leaves them open to be treated as an outsider and so often vilified by the very organisation whose real reputation they are trying to defend.

It becomes much easier to “shoot the messenger” rather than listen to the message. If we believe that the truth will set us free, we need to have the courage to ask questions about all organisations in which we are involved, the Church and NGOs no less than businesses or government.

And as people of faith we should welcome those who force us to answer hard questions.

From the Margins to the Centre