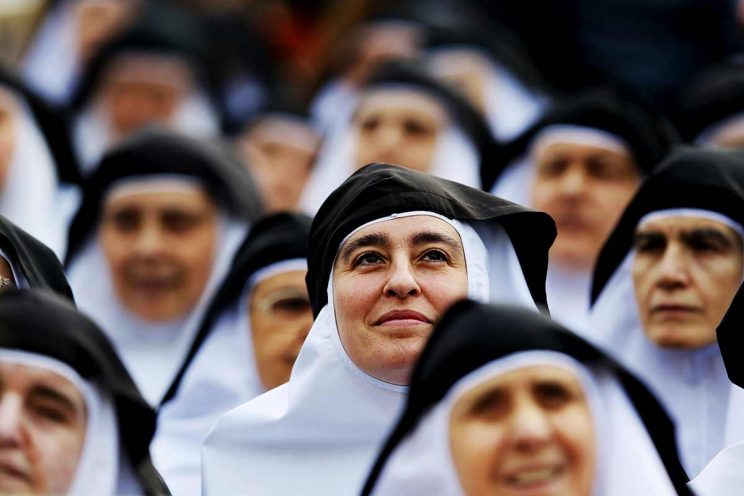 Long-term studies on nuns, going back to the 1930s, have revealed the secret of growing old well: among the chief attributes are happiness and fulfilment. (Photo: Alessandro Bianchi, Reuters/CNS)

What is the secret to happiness and aging well? A long study of nuns in the US holds some of the answers, as FR HUGH LAGAN SMA explains.

In the 1930s, a group of 180 young Catholic women were asked to write short autobiographies as part of their admission requirements to the School Sisters of Notre Dame congregation in Mankato, Minnesota.

Decades later, their essays would become an important part of the study of positive psychology (what makes life worth living), as well as challenge decades-old theories of age-related brain disease and longevity.

In 2001, researchers from the University of Kentucky published their now famous “Nun Study” which analysed the linguistic patterns of handwritten autobiographies of young female aspirants to religious life.

The researchers also conducted a longitudinal study of aging and neurocognitive disease among present-day finally professed Sisters to better understand the potential causes and risk factors for the development of Alzheimer’s disease.

The Sisters were considered an ideal research group due to their homogenous lifestyle and histories. Their remarkable similarities eliminate many of the confounding variables that plague most human studies.

The researchers found a “very strong association” between positive emotional content in the autobiographies written in early adulthood — in the 1930s — and longevity six decades later.

“Positive emotional content” was defined by the researchers as the use of descriptive language which communicated a high level of fulfilment, accomplishment, optimism and meaning in one’s life.

The researchers discovered that the more cheerful sisters lived ten years longer than the least cheerful Sisters — and for every one percent increase in the number of positive sentences in their autobiographies, there was a 1,4% decrease in mortality rate.

The correlation between the use of positive emotions and well-being remained strong even when the researchers compared autobiographies of equal complexity.

In other words, a worldview in early adulthood which values gratitude, connection and purposeful living positively contributes to well-being, resilience and longevity.

The results of the “Nun Study” resonate strongly with research exploring what makes for a happy and contented life.

Positive psychology studies consistently have found that authentic happiness primarily stems from creating purpose and meaning in our lives.

The “Nun Study” suggests that living a long and fulfilled life does not come from the distant hope of finding meaning in our future; rather, it comes from creating meaning in our present lives, nurturing gratitude and compassion in our relationships and believing in something greater than ourselves.

The second study conducted by the University of Kentucky researchers included 678 finally professed School Sisters of Notre Dame and sought to better understand what causes the brain to deteriorate with age in some people while others remain intact.

The Sisters ranged in age from 75 to 106 when the study began in 1986. Some of the 90-year-old Sisters were highly functional while others in their 70s were already severely disabled.

The researchers were able to access a treasure trove of personal information related to each sister in the convent archives.

All participants agreed to annual assessments of cognitive and physical function, medical exams, blood work for genetic and nutritional markers, neuropsychological testing and brain donation at death for neuropathologic study.

The subjects of the “Nun Study” remain the largest brain donor population in the world.

One remarkable finding in this study continues to confound medical professionals and researchers.

Post-mortem brain tissue evaluation of 500 Sisters revealed that many met criteria for full-blown Alzheimer’s disease without showing any lifestyle symptoms while they were still alive.

The robust synaptic density and high cognitive reserve present within the brains of these Sisters was understood to be protective against cognitive loss and neurogenerative disease. It seems that as particular areas degenerated in their brains, other well-exercised areas took over those functions.

This finding lends support to the hypothesis that strong mental reasoning skills early in life and an active commitment to life-long learning helps reduce the risk of brain atrophy and neurogenerative disease later in life.

Lifestyle is the key

In both studies, lifestyle factors were shown to enhance both quality of life and longevity. Strong social connections, a life-long love of learning, and being attentive to the needs of others all fostered healthy aging.

When asked her motivation for agreeing to participate in the “Nun Study”, one 101-year-old sister, who had been an educator all her life, replied: “The ‘Nun Study’ allows me to keep teaching even after I die.”

Continuing to stay actively engaged in something you love, mentoring others and stable friendships are much of the secret of aging well.

While a spiritual worldview was understood to positively correlate with better quality of life, the positive or negative traits attached to a higher power were key to understanding how such a belief enhances wellbeing and builds resilience.

Healthy eating also contributed to brain health. The researchers found during postmortem brain examinations that the Sisters who had high levels of folate (folic acid) were less likely to display the physical lesions of Alzheimer’s disease.

Folate is a naturally occurring vitamin commonly found in dark green vegetables such as spinach and broccoli and is understood to help protect the brain against neural damage.

A larger and more racially diverse study begun in 1993. Called the “Religious Orders Study” (Rush University), it seeks to extend the “Nun Study” and boasts 1350 male and female participants from 45 religious orders (including the School Sisters of Notre Dame).

The “Religious Orders Study” investigates memory and aging, and has identified protective and risk factors in the development of Alzheimer’s disease across the lifespans.

A popular urban myth posits that playing sudoku, crossword puzzles and visiting “brain-training” websites help build cognitive reserves and mitigate against the onset of dementia disease later in life. The bad news is that the level of difficulty in these activities is considered too low, and so the benefits to brain health are considered minimal.

The “Nun Study” and the “Religious Orders Study” challenge the belief that a decline in brain health and wellbeing are inevitable consequences of aging. Like so much of life, the attitude we bring into each new day can powerfully determine how we experience the quality of our lives.

Remember, life is 10% what happens to you and 90% how you choose to react to it.

One of the participants in the “Nun Study” witnessed her mother and sister suffer through many years of living with Alzheimer’s disease until their deaths.

While the study participant acknowledged that the findings of the study will not bring her loved ones back, she explained her decision to volunteer for the study as wishing to contribute to her local community and leave the world a better place than she found it.

It is perhaps such a generative and generous outlook which makes all the difference between living a long and fulfilled life and simply living your life as a spectator on the side-lines.

And with the help of some divine inspiration, the brain remembers this difference.

Fr Hugh Lagan is a priest with the Society of African Missions and a clinical psychologist.