Priest: ‘Miracle in my Church’s Destruction’ 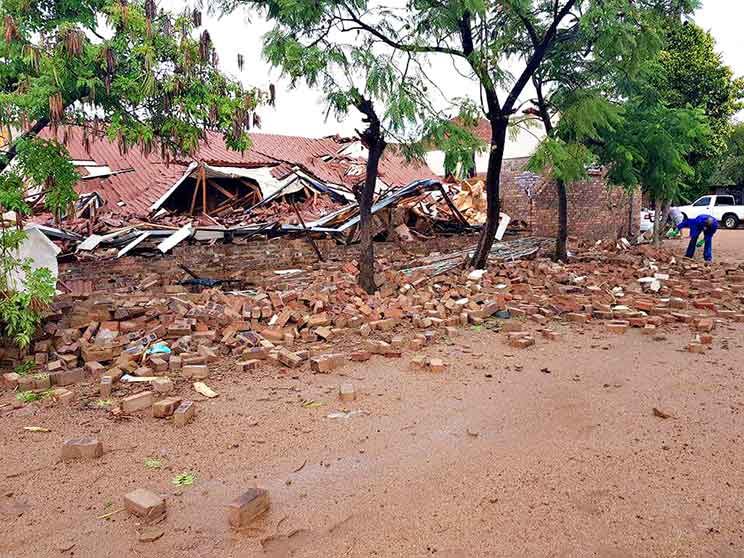 The collapsed church in Winterveld. Parish priest Fr Jacob Banda says it is a miracle that nobody was hurt or killed.

A  Pretoria parish is picking up the pieces after its church suddenly collapsed just hours before it was going to be packed with the faithful.

The Good Shepherd Church in the pastoral district of Winterveld collapsed in the late afternoon of March 31, just hours before the faithful were about to celebrate the Easter Vigil Mass.

Preparations for the vigil were underway at the Good Shepherd church on the morning of the collapse. The church was being cleaned and decorated.

Once preparations were done, parish priest Fr Jacob Banda retired to his presbytery to rest, when he heard a loud sound outside.

“When I heard the boom, I initially thought that a part of the church had collapsed. I was devastated when I stepped outside and discovered that the entire structure had crumbled, and all that was left was rubble.”

Fr Banda, who joined Good Shepherd parish last year, said that this wasn’t the first structural collapse they had experienced. Last year the chapel, also on the premises, collapsed. He managed to erect it again — only for the church to now collapse.

Fr Banda said that parishioners suspect that both incidents of buildings collapsing might be a result of poor workmanship by the construction company the parish had entrusted with the buildings.

“When the church collapsed on Saturday, it was not raining nor windy. It was only upon further inspection that we realised that the church appeared to not have been built well structurally, and noticed that no cement was used between most of the bricks, and where cement had been used, it was not the correct cement,” Fr Banda said.

The three churches which fall under the Klippan pastoral district in Winterveld — Good Shepherd, Emmanuel and St Peter’s — were all supposed to celebrate the night vigil at Good Shepherd. Due to quick thinking and communication between the three parishes, the parish was able to change the venue and hold the vigil at St Peter’s.

For now, the parishioners will celebrate Mass in the rebuilt chapel on the premises. Though not ideal, as the size does not cater for the number of people, it will have to do.

Fr Banda said that despite the devastating incident, he is thankful that the church was empty at the time it collapsed.

It Was a Miracle

“If this had happened on the night of the vigil, it would have been a really tragic event and nobody would have survived,” he said.

“These are miracles that cannot be understood or explained, but if you start counting the blessings and you look at how God has protected us from something tragic, then you’ll see it was definitely a miracle.”

Inside the church was a big, heavy crucifix hanging above the altar. All that remained of it after the collapse was Jesus’ hands on the cross.

Work is underway to clear the rubble, and Fr Banda is hoping that the diocese and the community will help the parish in raising the church again.

Bring the Noise! A Church That Will Stand the Test of Time

It’s my humble opinion that so many of our Catholics brothers and sisters are very godly, without always living out...