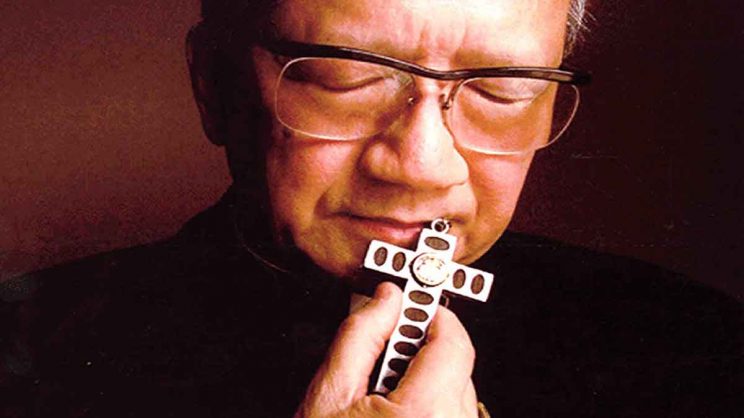 Naturally, in a document on the Christian call to holiness, Pope Francis cited a heavenly host of saints – including some whose sainthood causes are ongoing and some who probably will never be canonised.

“A great cloud of witnesses,” he said, encourages each Christian to take steps toward holiness. “These witnesses may include our own mothers, grandmothers or other loved ones,” he wrote.

In “Gaudete et Exsultate” (“Rejoice and Be Glad”), the apostolic exhortation on holiness, Pope Francis quoted a myriad of experts – canonised saints – on the striving for holiness but, like much of the document, many of those quotations offered very practical advice rather than lofty thoughts.

In a footnote about how saints are happy and usually have a good sense of humour, Pope France quoted a prayer attributed to the English martyr, St. Thomas More:

“Grant me, O Lord, good digestion, and also something to digest. Grant me a healthy body, and the necessary good humour to maintain it. Grant me a simple soul that knows to treasure all that is good and that doesn’t frighten easily at the sight of evil, but rather finds the means to put things back in their place. Give me a soul that knows not boredom, grumbling, sighs and laments, nor excess of stress, because of that obstructing thing called ‘I.’ Grant me, O Lord, a sense of good humour. Allow me the grace to be able to take a joke and to discover in life a bit of joy, and to be able to share it with others.”

St. Ignatius of Loyola, the founder of the Jesuits, appeared repeatedly in the document, as did St. Francis of Assisi, St. Teresa of Kolkata, St. Teresa of Avila, St. Therese of Lisieux and St. John Paul II.

But Pope Francis also highlighted advice from the late Vietnamese Cardinal Francois-Xavier Nguyen van Thuan, whom the pope declared venerable in 2017. The Vietnamese cardinal had spent 13 years in prison under his country’s communist regime – nine of those years in solitary confinement.

In the new document, Pope Francis said that during his time his prison, the cardinal “refused to waste time waiting for the day he would be set free. Instead, he chose ‘to live the present moment, filling it to the brim with love.’ He decided: ‘I will seize the occasions that present themselves every day; I will accomplish ordinary actions in an extraordinary way.'”

Pope Francis also referred in the document to the “witness borne by the Trappists of Tibhirine, Algeria, who prepared as a community for martyrdom.” In 1996, the monks were kidnapped from their monastery and beheaded by a group of terrorists trained by the al-Qaida network. The monks’ story was treated in the film “Of Gods and Men.”

In January, the pope signed a decree formally recognising the monks’ death as martyrdom; the announcement of a date and place for their beatification is expected soon.

The pope’s homage to the Trappist martyrs is part of a section on the importance of being part of a community, supporting and challenging one another. “Growth in holiness is a journey in community, side by side with others,” he wrote.

Saint Devotion Should Never Be Slavish

Such sharing works not only for the famous formally canonised saints, he said. “In many holy marriages, too, each spouse becomes a means used by Christ for the sanctification of the other. Living or working alongside others is surely a path of spiritual growth.”

Holy spouses would have the advantage of knowing a saint and would probably agree with Pope Francis’ observation about the holy ones: “Their lives may not always have been perfect, yet even amid their faults and failings they kept moving forward and proved pleasing to the Lord.”

The pope encouraged Catholics to draw what inspiration they find useful from the lives of saints, but also said it is not a good idea to try to copy them exactly because that could “lead us astray from the one specific path that the Lord has in mind for each of us.”

And, he cautioned, devotion to a particular saint should never be slavish.

“Not everything a saint says is completely faithful to the Gospel; not everything he or she does is authentic or perfect,” the pope wrote. “What we need to contemplate is the totality of their life, their entire journey of growth in holiness, the reflection of Jesus Christ that emerges when we grasp their overall meaning as a person.” By Cindy Wooden, CNS