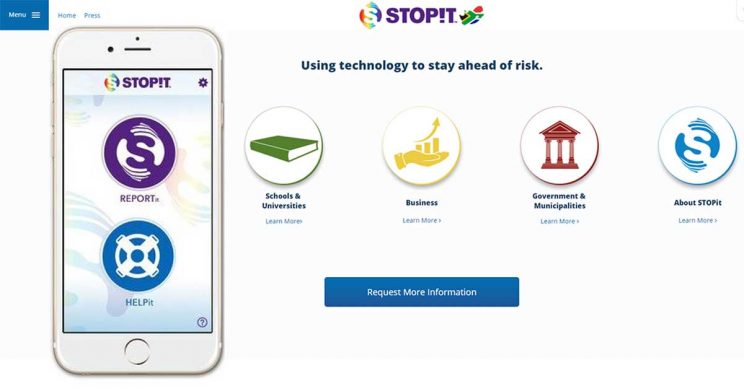 A Catholic school in Johannesburg has rolled out an anonymous reporting system that lets learners and staff members report bullying and inappropriate behaviour via a cellphone app.

After putting it through a trial run at the end of last year, St David’s Marist Inanda in Sandton launched its STOPit app in the high school.

With the app installed on their cellphones or tablets, learners and staff members who witness or experience instances of bullying are able to anonymously submit reports consisting of text, pictures or videos. These reports are then received and managed by administrators at the school.

The Grade 8 students currently have access to an updated version of the app, which will later be made accessible to the rest of the school.

St David’s head psychologist Lloyd Ripley-Evans and another psychologist at the school’s wellness centre receive and manage the reports.

Although the app is not compulsory, learners are encouraged to install it to prevent instances of improper behaviour from occurring.

The feedback from the app, said Mr Ripley-Evans, has been “generally positive so far”.

“We’re still in the entry phase of using STOPit,” he explained.

Feedback from the Students

“Only a small portion of students are using the app, so the number of reports we’ve received is very limited at the moment. But the feedback from the discussions we’ve had with students has been positive.

“The anonymous nature of the app certainly helps, and the versatility of the back-end — what we as the administrators can do with the app, the amount of information that we can generate from it to help guide the interventions, and so on — is incredible.”

Mr Ripley-Evans added that using the app not only helps identify various trends and concerns that are specific to grades or groups so that administrators can intervene, it also helps to “empower learners”.

“What we’re hoping to achieve [with the STOPit app] is that the boys feel they’re in a space where they can voice their concerns,” he said.

“It’s a mechanism we’ve put in place to encourage the boys to pause for thought — thinking about the behaviours of others and their own — and to deal with the realities they face,” Mr Ripley-Evans said.

“St David’s takes a pro-active approach to various things, especially taking a stance against bullying. We’re trying to be ahead of problems as opposed to dealing with them when they happen.”

Alongside the STOPIt app, St David’s has implemented other anti-bullying initiatives as part of its human rights awareness programme.

These include senior art pupils taking part in a paving art project on the school grounds, producing work in chalk around the themes of bullying, gender violence and verbal abuse.

For more information about how to sign on with STOPit, visit www.stopitsolutions.com/