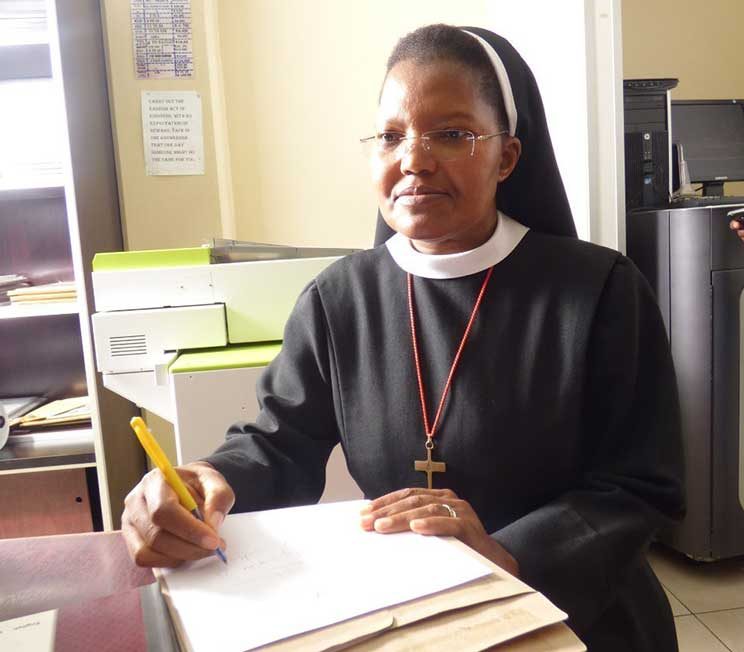 Precious Blood Sister Nokwanda Bam, inspired by her parish priest as a young girl, felt a calling to serve God as a nun. Her Catholic family was “torn apart” by her decision to enter convent training, yet were all there, “in full support”, when she made her first vows. (Photo: Kate-Lynn Fleshman)

As a girl, Sr Nokwanda Bam wanted to be a priest. Today she is a Precious Blood Sister. She told NEREESHA PATEL about her vocational journey.

It was during her primary school years that Precious Blood Sister Nokwanda Bam of Tsomo in the Eastern Cape, part of Queenstown diocese, received her calling to the religious life.

Inspired by her parish priest, the late Fr Paul Rankel, a Pallottine Father who demonstrated his dedication and love for God and the people he served, the young girl wanted nothing more than to become a priest just like him — or rather a nun, as her mother later explained to her.

“I was afraid to express this desire to Fr Rankel until it grew stronger and stronger so that I couldn’t keep quiet anymore,” Sr Bam told The Southern Cross.

Ultimately, she made her decision: she could no longer ignore her calling to serve God and his people.

She approached Fr Rankel and revealed her intentions; he then directed her to the Missionary Sisters of the Precious Blood, an all-female congregation which was founded by Abbot Franz Pfanner in 1885. There, her calling was realised.

“Through some accompaniment by my formator and prayer, I was inspired by John 15:16, which says, ‘You did not choose me, I chose you.’ From these words, I understood the message that God sends us people to act as instruments to draw us closer to him,” said Sr Bam.

Born in Tsomo in 1970, Sr Bam was like “any other girl”. The second eldest of seven children, she enjoyed carrying out household chores, tending to the family’s vegetable garden, playing a variety of sports from netball to athletics, and being in the company of her friends.

She attended a local primary school which was 30 minutes away from home, and in 1990 she matriculated from St James Senior Secondary School in nearby Cofimvaba. Sr Bam shone academically, continuously striving to maintain her work ethic.

“My ambition was to excel in whatever I did at school academically. I remember being involved in a healthy competition with one boy in class: we each always held positions number one or two,” Sr Bam warmly recalled.

Initially baptised in the Anglican church, Sr Bam and her family converted to Catholicism because her mother “fell in love with the Catholic faith”—that, and she wanted the entire family to be able to attend church, as the local Anglican church was simply too far to get to.

The young Nokwanda was inspired by the likes of Fr Rankel and Precious Blood Sister Mechtild Biberauer, who became principal of St James.

“As I secretly watched her pray in church after lunch, I wondered to myself whether I would ever pray like she did.”.

Newly-matriculated, Nokwanda was received into the postulancy at Glen Avent convent in Mthatha for a year. Afterwards, she proceeded into the novitiate in Macheke, Zimbabwe, from 1992-94, learning the charism and spirituality of the missionary Sisters.

During this time, Sr Bam found it difficult to learn another language and was slow to adjust to her surroundings.

She also questioned her vocation when fellow novitiates discontinued their training.

“They could not understand where this all came from. Initially, I received no support from them, except from my mother who stood by me and said, ‘Let her pursue what is in her heart and if she can’t, she will come back home.’ Her words gave me a sense of freedom and in difficult times helped me to go on. Lo and behold, when I made my first vows, my family were all there in full support,” she explained.

Sr Bam said: “The people who inspired me were not the end in themselves, but it was and still is God who calls and leads me forward. This has kept me firm and grounded in my religious life.”

Her formation also enabled her to overcome her difficulties. “I learned what international and inter-cultural living is all about, the readiness to be sent to any country to serve. The experience has also widened my horizon and has given me insight about different cultures, different ways of doing things, without feeling overwhelmed.”

As a missionary Sister, Sr Bam is a nurse as well as an educator, teaching student nurses in the field.

In addition, she is also part of a team that is involved in vocation promotion activities such as visiting parishes and addressing girls and young women about religious life within and outside South Africa.

For anyone who wishes to join the religious life, Sr Bam quoted Pope Benedict XVI: “There is hardness of hearing where God is concerned and this is something from which we particularly suffer in our own time.”

She added: “It is important to emphasise that it is only through silence and prayer that we can hear God speaking to us. As it says in Matthew 9:37-38, ‘The harvest is plentiful but the labourers are few, ask the Lord of the harvest therefore, to send out workers into his harvest field.’”

Seminarians: Using Church for Personal Ambition is a ‘Plague’

Sisters of Nazareth Share Stories of How They Were Called