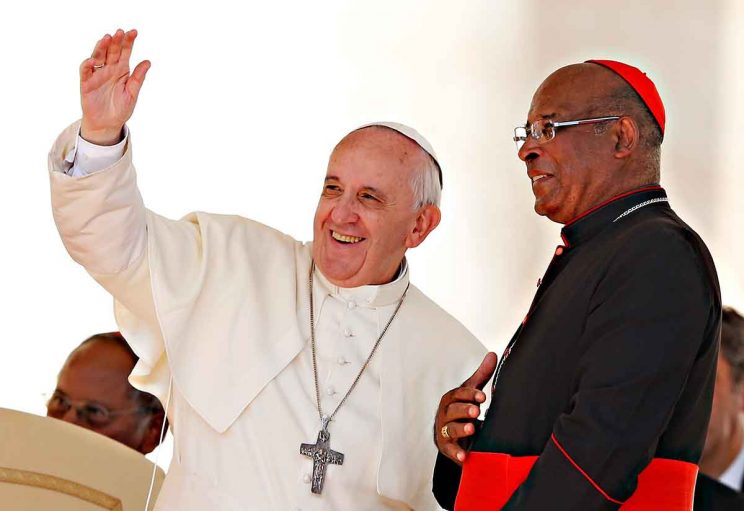 Pope Francis and Cardinal Wilfrid Napier in St Peter’s Square. The pope has asked the cardinal to stay on as archbishop of Durban indefinitely. (Photo: Paul Haring/CNS)

Pope Francis has asked Cardinal Wilfrid Napier to continue serving indefinitely as archbishop of Durban, two years after the cardinal submitted his resignation on reaching the age of 75, as required by canon law.

Cardinal Napier said that the pope’s decision is surely a vote of confidence from the Holy Father, especially when it incurs greater and closer collaboration with him.

After Cardinal Napier submitted his resignation in March 2016, he was initially told to continue as archbishop for two years.

Just before Easter, Cardinal Napier received another instruction from the Holy Father that he should continue in his position until given further directive, which he said he is happy to do as long as he is still able.

Cardinal Napier served as bishop his home diocese of Kokstad from 1983 to 1992, when he was appointed archbishop of Durban. He was made a cardinal in 2001 and currently serves on the Council of Cardinals for the Study of Organisational and Economic Questions of the Apostolic See.

‘I am Glad to take up the Challenge’

Asked whether he still feels fit enough to run the archdiocese, Cardinal Napier said that Pope Francis, whom he meets almost every three months, seems to be of the opinion that he is.

“I am glad to take up the challenge to prove him right, by doing all that is necessary to remain physically and mentally as fit as possible,” Cardinal Napier told The Southern Cross.

“Of course, there are times and circumstances when advancing age does show itself, but that is somewhat compensated for by the wisdom that age and experience force upon us.”

Cardinal Napier expressed his gratitude for the high degree of cooperation and mutual support that has been evident among the bishops, priests, deacons and religious of the Metropolitan Province of Durban in his time as archbishop.

“I greatly appreciate the support received especially from the bishops of the suffragan dioceses for common projects such as Caritas KZN, Joint Witness KZN, the Zulu Bible Translation Project, and so on,” he said.

Marriage and the Family

The cardinal said that he isn’t sure what he will be able to accomplish in the future, but sees a challenge ahead for him, together with the priests and deacons of his archdiocese, in the area of renewing and, where necessary, reforming the Church. This, he added, is particularly true of the marriage and family life ministry as a direct result of the two synods of bishops on marriage and the family in 2014 and 2015.

“Amoris Laetitia, the final document of the synods on the family, in particular, calls on us to engage in more thorough and far-reaching preparation for marriage, not just the wedding day; accompany newly-wed couples for the first five to ten years of marriage; seek out and accompany those whose marriages have failed so they’ve divorced and ‘remarried’, and accompany families with special needs, single-parent families, cohabiting couples, and so on,” Cardinal Napier said.

“I believe patient listening, persevering prayer and gentle pursuit will bear the kind of fruits that Pope Francis and the Synod Fathers had in mind when they gave us the benefit of the prayer, reflection, and wisdom on the role of a concerned pastor today,” he said.