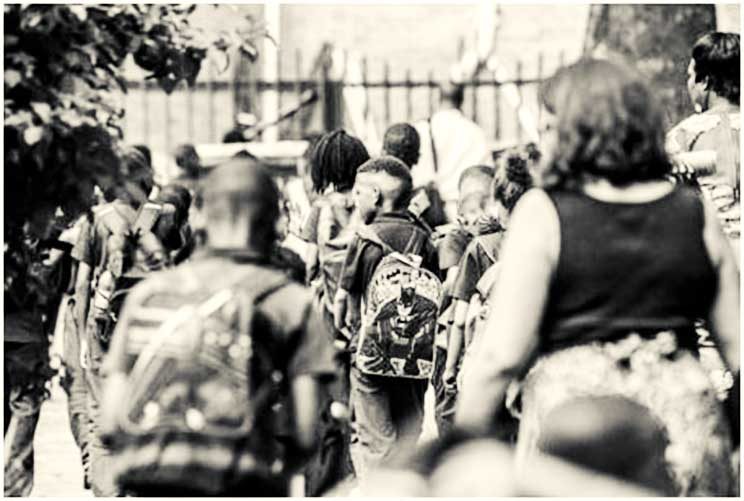 To celebrate its tenth anniversary, a project started by a Catholic school for the education of refugee children will hold a special function in April. The Three2Six Refugee Children’s Education Project in Johannesburg was developed by Sacred Heart College in 2008, and later expanded to Observatory Girls Primary School and Holy Family College.

The project provides a bridging education programme for about 300 refugee and migrant children who cannot access public education. Classes in maths, English and life skills are held from 15:00 to 18:00 daily at the three host schools’ facilities.

Additionally, Three2Six learners are provided with uniforms, textbooks and school materials, one meal a day and, where necessary, safe transport to and from school. Employment and professional development for refugee teachers is also offered.

Current and past students of the project, their parents, benefactors and volunteers have been invited to attend the anniversary event, which will take place at Sacred Heart College from 10:00 to 14:00 on April 7.

There will be a variety of guest speakers who will be reflecting on the project’s history, accomplishments and future endeavours. They are Ivan Irakoze, a past pupil who was part of the project; Grade 1 teacher Lindani Juba; project member Hortance Kanku; and human rights activist Sharon Ekambaran.

Special entertainment will be provided by award-winning musician Tresor, and two performance groups — Dassin and Igihozo — from the Congolese and Rwandan refugee communities.

“There’s a great deal of excitement,” said Colin Northmore, head of Sacred Heart College and director of Three2Six. “Those who have been part of the project from the beginning feel incredible pride in what they have achieved.”

Since its inception, according to Mr Northmore, the project has provided 475000 meals, raised over R31 million from its initiatives, and assisted 2076 children, with more than 550 children being integrated into South African society.

Other achievements include the learners developing and staging their own musical theatre production in collaboration with Minimax Performing Arts and the MindBurst Workshop; holding an art exhibition that raised over R47000 and was nominated for a BASA Award; producing two stop-frame animations — Precieuse and Precieuse 2 — based on the children’s experiences, and publishing Refugee Stories, a book made up of stories and drawings collected from the children.

The vision of Three2Six, said Mr Northmore, is to “expand the project to more schools in Johannesburg and in other provinces”, specifically in areas where there is a “significant concentration of refugees”.

Three2Six leaders are currently developing proposals that will help increase their core funding and realise the goal of establishing the project in schools outside Johannesburg.

“There are still a lot of children in South Africa who don’t have access to education due to poverty and xenophobia,” said Mr Northmore. “Three2Six is a model that could be applied to every school in the country. Any school that has the desire to make a difference in its community could, and should, implement this model.”

For more information on how you can donate to the Three2Six Refugee Children’s Education Project, visit www.three2six.co.za