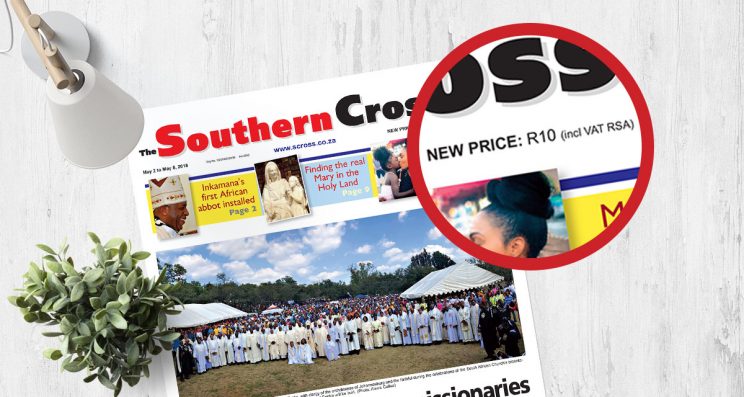 Due to sharp increases in the production and distribution of The Southern Cross, as well as the recent VAT increase, we are forced to increase the cover price of the newspaper as of May to R10.

“While we realise this is a significant increase, we have to remind ourselves that R10 does not have the same buying power it used to have. Now it gets you a can of cool drink or less than half a gossip magazine. I’m sure we can all agree that a paper such as The Southern Cross does one more good than either of these,” said Rosanne Shields, chair of the board of the Catholic Newspaper & Publishing Company, which owns The Southern Cross.

The newspaper survives on sales and advertising, and the generosity of the contributors to our Associates Campaign. It receives no Church subsidies.

“We are confident that our readers will remain loyal to us even after the price increase,” Ms Shields said, adding that the board had considered the messages from numerous readers who encouraged a cover price of R10 — “because they felt The Southern Cross is worth that amount and more, and also because it makes paying for the newspaper at church more practical”.

Ms Shields asked parishes “to please continue to market and promote The Southern Cross, including the digital edition, which is exactly the same as the print edition”.

The annual subscription to the digital edition is only R420, which works out to just R8 per week.