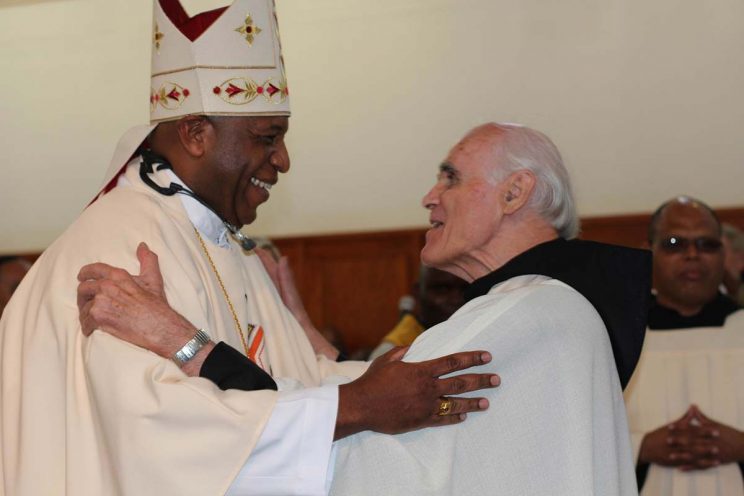 Six abbots were present at the installation, alongside four bishops and VIP guests, including politician Mangosuthu Buthelezi.

Bishop Kumalo described the celebration as a day of joy and thanksgiving to God for the first African to be elected abbot of the abbey, which has a special place in the life of Eshowe diocese.

Addressing Abbot Mwaniki, Bishop Kumalo said: “Not only will you need our prayers so that you will be a wise shepherd, but also that you and your confreres in this abbey will have the wisdom to remain faithful to St Benedict’s rule and tradition while becoming Africanised.”

The challenges St Benedict faced and responded to centuries ago were no less than those facing the world and the Church today, he said.

“Many years ago St Benedict and his followers not only transformed people’s hearts, but with their hands changed forests into habitable fields. We pray that you will lead this community to a deep spiritual and prayer life which can also renew the world,” Bishop Kumalo said.

At the Mass, Abbot Mwaniki thanked God “for my journey and this day” and honoured his mother, Ann Susan Wangeci, who was present.

“She brought up seven of us as a single mother, a woman of faith who believes in the power of prayer,” he said, adding: “She also ran a police station.”

He noted that his family had played a big part in his overall formation: “They will not let me be big-headed or take myself too seriously. They have been doing that all my life and they will continue to do so.”

As the new abbot, he said he sees his first and primary job as assisting his brother monks on their lifelong journey towards God.

Chief Buthelezi lauded the Benedictine tradition of work, prayer and self-sufficiency — principles which, he said, resonate with him.

He valued the work of the pioneering Benedictines and their service through St Francis Hospital in Mahlabathini, Tswana Convent School in Nongoma, and St Victor High School in Twasana.