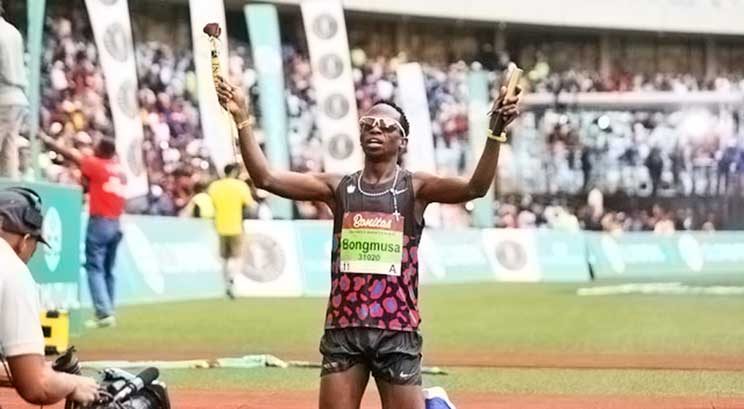 Bongmusa Mthembu, seen with his rosary around his neck, won this year’s Comrades Marathon, his third win.

South African Comrades champion Bongmusa Mthembu clutched his rosary for the third time, after completing a hat-trick win in the 93rd Comrades Marathon with a time of 5:26:35.

He is only the second South African to win the internationally renowned Kwazulu-Natal race twice, after “Comrades King” Bruce Fordyce’s final, and ninth, win in 1990.

To date, Mr Mthembu has competed in 13 Comrades Marathons, and has cemented his place as South Africa’s top ultra-distance runner.

This season was a tough one, he said, but by the grace of God, he was able to not only run but win.

“I had a very difficult season training in Lesotho where our training camp was,” Mr Mthembu said.

“We had really bad weather, which definitely hindered my training, and I was dealing with the death of my close friend and teammate Siphiwe Ndlela, who died in March.

“I had to cut my camp short for his memorial service. Thankfully, with my experience in running and having won the Comrades before, I could rely on that. Also, the guys I trained with really helped me as well,” Mr Mthembu said.

This Comrades marathon was also a very emotional one for him.

“To win Comrades is an amazing achievement, and to win it for the third time was emotional. Seeing my family, friends, and neighbours at the finish line was also very special for me,” he said.

“I always try to push myself harder and to better myself. I want to inspire children out there, especially from rural areas, to show them that anything is possible. With hard work and determination, nothing can hold you back.”

When asked about his rosary, which he is always seen clutching at the end of the race, Mr Mthembu answered: “It’s only by the grace of God that I am able to achieve the things I do. God is always with me, he knows my heart.”

Special congratulations were also due to the two priests and two laymen, named the #Fab4, who as previously reported in The Southern Cross, were to use their 2018 Comrades run to raise funds for Radio Veritas through the #runforradioveritas campaign.

The Catholic flag flew high at this year’s Comrades.

Pray.com: A Community that Prays for You and With You