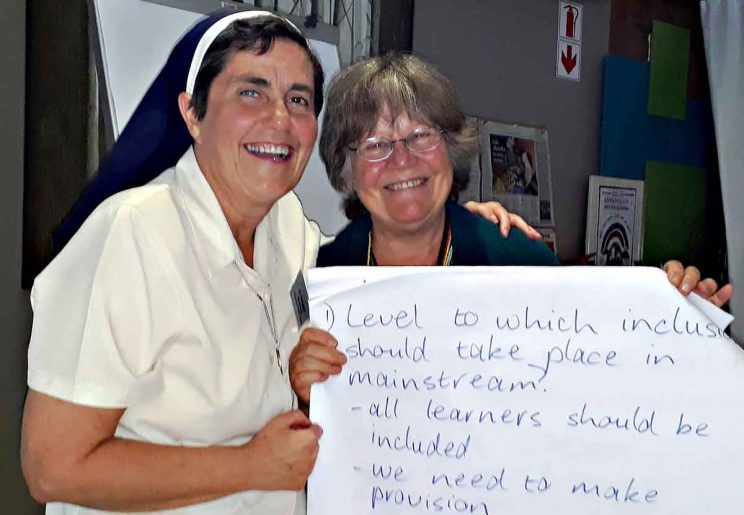 Sr Mary McAteer, organiser of a conference in Nemato, Eastern Cape, on special needs, with Dr Pam McLaren, keynote speaker at the conference.

The high-level conference was organised by Assumption Sister Mary McAteer and sponsored by the Irish mission funding agency Misean Cara.

Attending were special needs coordinator Suzanne Halligan, representatives of the multi-disciplinary teams associated with the education and training, and health and wellbeing, of challenged children and adults at Enkuthazweni, plus officials from the Departments of Education, Social Development and Health, and other NGOs.

The key paper was presented by Dr Pam McLaren of the Disabled Action Research Team, based in KwaZulu-Natal. The team has contributed extensively to the knowledge of the needs of those with disabilities in Eastern Cape. Many of Dr McLaren’s findings are significant for other areas of the country as well.

Her paper highlighted the vast need for increased resources for those with disabilities.

Research has shown that Eastern Cape has the highest rate of foetal alcohol spectrum disorder, which is caused by alcohol consumption during pregnancy, not only in South Africa, but in the world.

Points raised as a result of Dr McLaren’s presentation included:

A court case has been brought against the Western Cape Education Department and national government to compel the provision of quality special education. This would result in the provision of funding from the Treasury.

Localised problems identified in breakaway groups were the permissive attitude allowing taverns to remain open until 4am over holiday weekends in Nemato, and taverns which admitted underage drinkers.

Parasitic infections were also widespread, with up to ten different infections which can affect concentration in children.

On the positive side, there were meetings of stakeholders every two weeks organised by the South African Police Service, which also conducts regular drug searches, and community nurses who visit schools.

Breakaway groups reported a severe lack of resources, which hindered professionals from carrying out their huge responsibilities.

These included no transport or unreliable transport, to an overwhelming number of children needing support in situations where one or two social workers or psychologists could not cope.