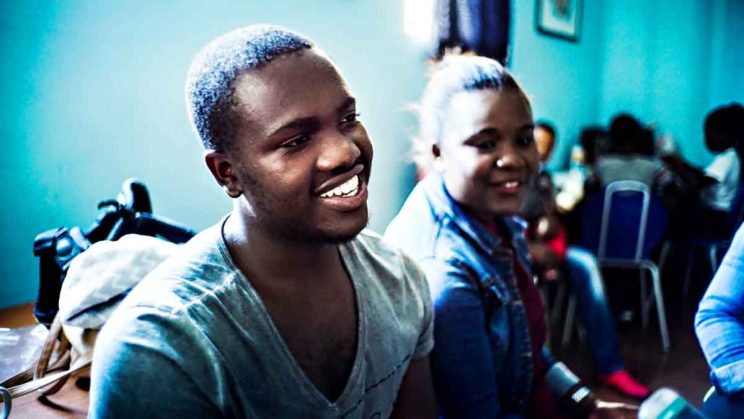 Refugees and asylum-seekers receive assistance and advice from the Scalabrini Centre in Cape Town, an initiative of the Scalabrini Fathers. (Photo: Hafeez Floris)

Today is World Refugee Day. To mark the occasion, Daluxolo Moloantoa explains how the Catholic Scalabrini centres respond to Christ: “I was a stranger and you welcomed me”(Mt 25:35).

The Catholic Scalabrini Centre has taken on the Department of Home Affairs in what is a David and Goliath battle.

It began in July 2012 when Home Affairs (DHA) closed its Refugee Reception Office in Cape Town. This action kicked the city’s Scalabrini Centre into action.

The courts have ruled in cases brought to them by the Scalabrini Centre that Home Affairs reopen the reception office. But despite two court orders to do so—and knowing the devastating consequences for asylum seekers of not doing so — it has failed to reopen the office.

The most recent court order, handed down in September 2017, mandated Home Affairs to reopen the reception office by March 31. Despite being in contempt of court, there is no indication from Home Affairs that they are working urgently to do this.

Be that as it may, the Scalabrini Centre of Cape Town has gained widespread recognition for taking on the powerful government department.

And that has brought to public attention the name of John Baptist Scalabrini and the congregation he founded.

Scalabrini was the bishop of Piacenza in Italy who founded the order that bears his name in 1887 to care for the welfare of migrants.

Today the Scalabrini Fathers specifically care for migrants, refugees, and seafarers. They interpret migration as a meeting place for peoples of different cultures and nationalities.

The congregation and their various lay organisations can be found in 24 nations across Asia, Australia, Africa, Europe and the Americas. The Scalabrini motto draws from the Gospel: I was a stranger and you welcomed me (Mt 25:35).

The Scalabrini Fathers have been providing welfare services in Cape Town to displaced communities since 1994.

The organisation is a research services-orientated entity, and is  part of a worldwide network of research centres known as the Scalabrini Migration Study Centres.

SIHMA sees its role as conducting and disseminating research that contributes to the understanding of human mobility and informs policies that ensure the rights and dignity of migrants, asylum seekers and refugees in Africa.

“I think South Africa should adopt a friendly migration policy for skilled migrants; there are still too many barriers which prevent the recruitment of highly skilled foreigners who are willing to move to South Africa and can be an asset to the country’s economy,” said Sergio Carciotto, SIHMA’s associate director.

“At the same time, it’s important to develop strategies to deal with low-skilled migrants,” he added.

A good example is the special dispensation for Zimbabweans which has regularised nearly 200000 Zimbabwean nationals since 2010.

“Asylum policies should be humane and respect the rights and dignity of refugees,” Mr Carciotto said, adding that asylum-seekers should be allowed to work, trade and be self-reliant.

“Local municipalities can play a greater role in facilitating integration and promoting social cohesion between local and migrant residents and should pursue policies of inclusion and fair participation,” he said.

“Limiting the participation of migrants from public consultations, community meetings and participatory planning may lead to their exclusion.

“It is recommended to establish, in those areas where the presence of migrants’ tends to be higher, migrants desks to enable all residents, including migrants, to access welfare and other services offered at municipal level.”

The South African government is in the process of reviewing its whole migration policy, Mr Carciotto said. “We have been providing inputs and comments on multiple occasions.”

Schooling, legal assistance for documentation, accommodation and emergency support are among the many services provided by the Sisters to help the city’s migrants to build up their lives in a dignified way.

The Sisters provide their services mainly through the Department of Pastoral Care for Migrants and Refugees of the archdiocese of Johannesburg.

“We are challenged to assist the minor migrant and refugee children. We see the need to integrate them in our society; to be positive actors in the process of social inclusion and for better social cohesion,” said Sr Maria de Lourdes MSCS, head of the Department of Pastoral Care and Migrants.

One major operation through which the Sisters make their contribution in the city is the Bienvenu Shelter.

Situated on the eastern periphery of Johannesburg’s central business district in Bertrams,  the shelter was founded in 2001 in response to the lack of services that cater for the basic needs of migrant (refugees or asylum seekers) women and children in Johannesburg.

At any one time, the shelter can accommodate 45 women and children. In 2014, it accommodated 151 migrants from 11 different African countries.

Over the past three years, the shelter has helped around 1500 women, both within Bienvenu Shelter and through the centre’s outreach programme.

The shelter is currently recognised in Johannesburg and beyond as the sole organisation that specifically provides safe and secure residential care for refugee children and women.

The Bienvenu Shelter aims to provide for the needs of migrants by offering them accommodation, guidance and support, food, clothing and assistance in accessing other needs such as basic health care, legal documentation, education and training, through referrals to other organisations.

The shelter also provides a creche, a baby room, and nursery and daycare services for children.

As a general rule, women and their dependents are allowed to stay for three months. Extensions are considered on an individual needs basis, so that the women can look for gainful employment and rebuild their lives in South Africa.

In its quest to be part of the community around it, and to foster relationships between the shelter’s residents and members of the neighbourhood, assistance and support are extended to local residents in the shelter in the form of access to childcare, food parcels and skills such as sewing and computer-literacy training.

Daluxolo Moloantoa is the content manager of the Scalabrini Institute for Human Mobility in Africa.